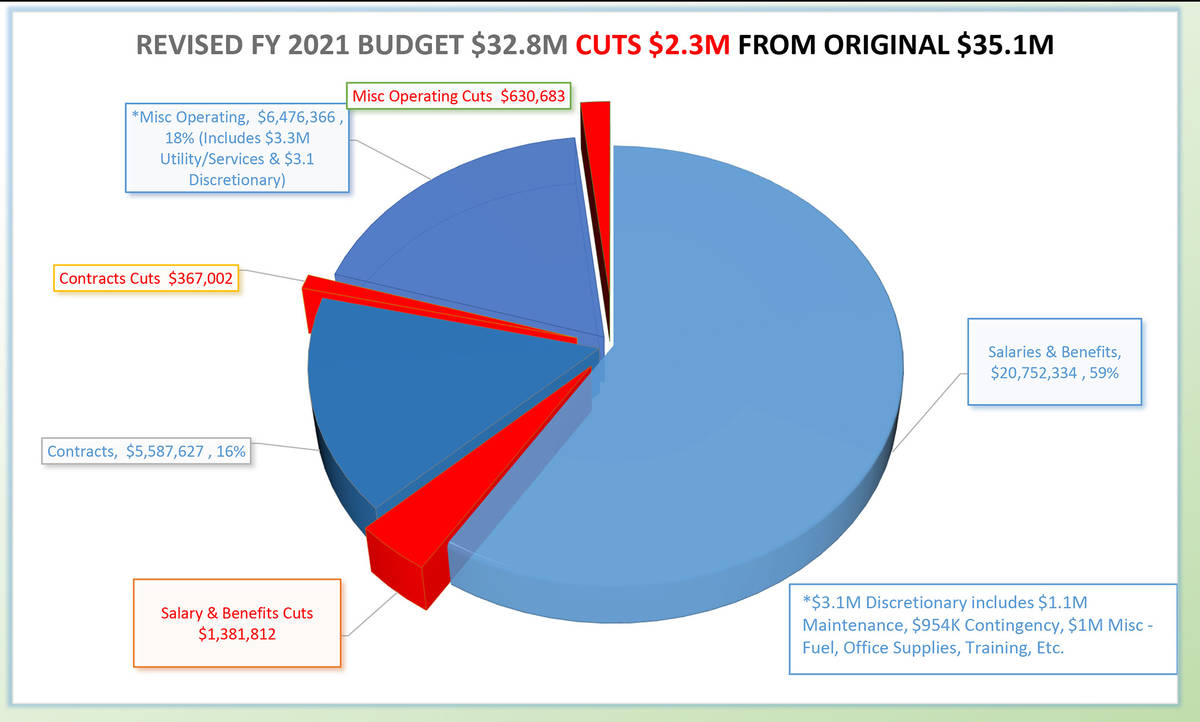 Boulder City City Council unanimously approved its 2020-2021 fiscal year budget during its meeting Tuesday, May 26. The budget includes a $2.3 million cut from the general fund operating budget to help offset the expected 40 percent loss of revenue due to the COVID-19 emergency.

City Council unanimously approved the final budget for the 2020-2021 fiscal year that includes several million dollars in cuts to accommodate expected revenue losses due to the COVID-19 emergency.

Additionally, all funded capital improvement projects for fiscal year 2021 are on hold until Jan. 1.

The $32.8 million final general fund operating budget is $2.3 million less than the one presented in March, and includes an estimated 40 percent loss in consolidated tax revenue, which is about $9.1 million. To balance the budget, approximately $6.5 million from fiscal year 2019-2020’s general fund that would have been put into reserves will go into the operating fund.

According to the city, the reserve account balances will still be “well within” the recommendations for best accounting practices.

“With the solar revenues, I don’t believe we are in as dire of a situation, but I think it’s better to expect the worst and hope for the best, so that’s how we created this budget,” said Finance Director Diane Pelletier at Tuesday’s, May 26, City Council meeting.

A little more than one third of the city’s revenues come from consolidated tax, which is a combination of sales, liquor, cigarette, real estate property transfer and government services taxes. It is the largest source of revenue for the city.

To help mitigate the estimated revenue loss, individual departments’ budgets were cut by 10 percent, special project funds were reduced by $2 million, salary and benefits were cut by approximately $1.3 million by implementing a hiring freeze and contracts were cut by $367,002.

“Boulder City department directors tightened belts … while avoiding an impact to the service levels we provide our residents, businesses and visitors,” said City Manager Al Noyola. “Since March, staff has frozen filling all vacant positions as they occur, decreased most discretionary spending and frozen all nonessential training and travel. Vacant positions will remain frozen until fiscal year ‘22.”

Councilman James Howard Adams asked what would happen if more money needed to be cut.

Noyola said he would recommend council cut money from the current staff’s salary and benefits, which represents 60 percent of the general fund.

Mayor Kiernan McManus said he “sincerely” hoped that did not need to be done.

“In my opinion, that makes the economic situation worse,” he said. “Every person who doesn’t have a job is a person who is not able to contribute to the economy.”

He did ask what the process would be though if that action was necessary.

Noyola said the city would have to follow the state law for declaring a fiscal emergency and then begin concession talks with the unions because most of the positions are protected under collective bargaining agreements. If any salary cuts came from those talks, they would be implemented for all of the city staff, not just ones with union contracts.

Council unanimously approved the budget with the stipulation that there will be no capital improvement projects initiated prior to Jan. 1 and any additional funding must be approved and discussed by council at that time.

McManus told staff he appreciated their work over the past several years in making the city budget easier to understand and see where the money comes from and goes.

“That gives us a better idea … when we get into situations like this that we’re not just looking at each other, going, ‘Well, what do we do now?’” he said.

Fred Voltz, who spoke during the public hearing for the budget, said one of his reactions from the presentation was that no salary cuts for the employees had been discussed.