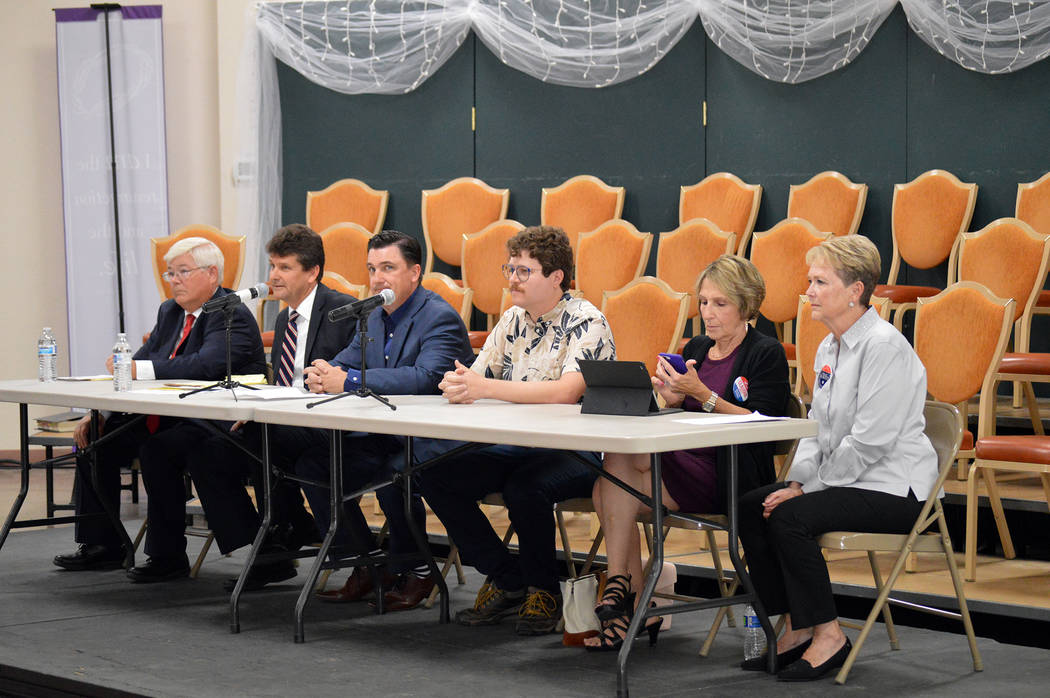 Residents were able to hear from candidates vying for a city leadership spot about staff levels, growth and trust in government at a forum Monday evening.

Incumbent council members Rich Shuman and Peggy Leavitt along with challengers James Howard Adams and Claudia Bridges as well as Mayor Rod Woodbury and mayoral candidate Councilman Kiernan McManus answered questions submitted by the public during the forum presented by the Boulder City Review at the Elaine K. Smith Building.

Neilson said he attended the event to find out what’s going on with the candidates and the election.

“I think every one of us wants to be an informed voter,” said Paul Matuska, who serves on the Planning Commission. “I wanted to get a better feel for the candidates. It was good.”

Kevin O’Keefe also said he came to the forum to learn about the candidates’ viewpoints so he could make an informed decision.

“I’m convinced the city is under great leadership,” he said. “I will vote for the incumbents because of the good things going on in the city. I’m glad I came.”

During the discussion the candidates weighed on the new staff positions implemented by the city.

“We are back to the level prior to the Great Recession,” McManus said.

Additionally, he said the majority of the positions accepted by the council are for the betterment of the city and its residents.

“You always have to balance that, but I think it’s been of value to us,” he said.

Shuman said he also supported those changes and some of them have allowed projects to be brought in-house for the city.

“I put a lot of faith in the city manager and what he recommends,” he added.

Leavitt said the purpose of adding staff was to save money and improve the level of service and accountability for the public. One example she gave was the city utilities department becoming separate from the public works department.

Bridges said there seems to be good reasons for increasing the number of staff and the numbers are reasonably justified. She also suggested a cap on the number of city employees be implemented because with the growth ordinance the city does not have the need to increase the budget.

Adams said he would like to believe that the new expenditures have been beneficial and that the staff should have goals to be efficient and not just do the bare minimum.

“The biggest threat to that is high turnover,” he added.

Additionally, he said he thought a new culture at City Hall should be cultivated, one that has more accountability and that can be more transparent without threat.

The candidates also discussed how to increase the public’s trust in local government and future issues the city could face.

The general election is Tuesday, June 11, and early voting starts May 25.