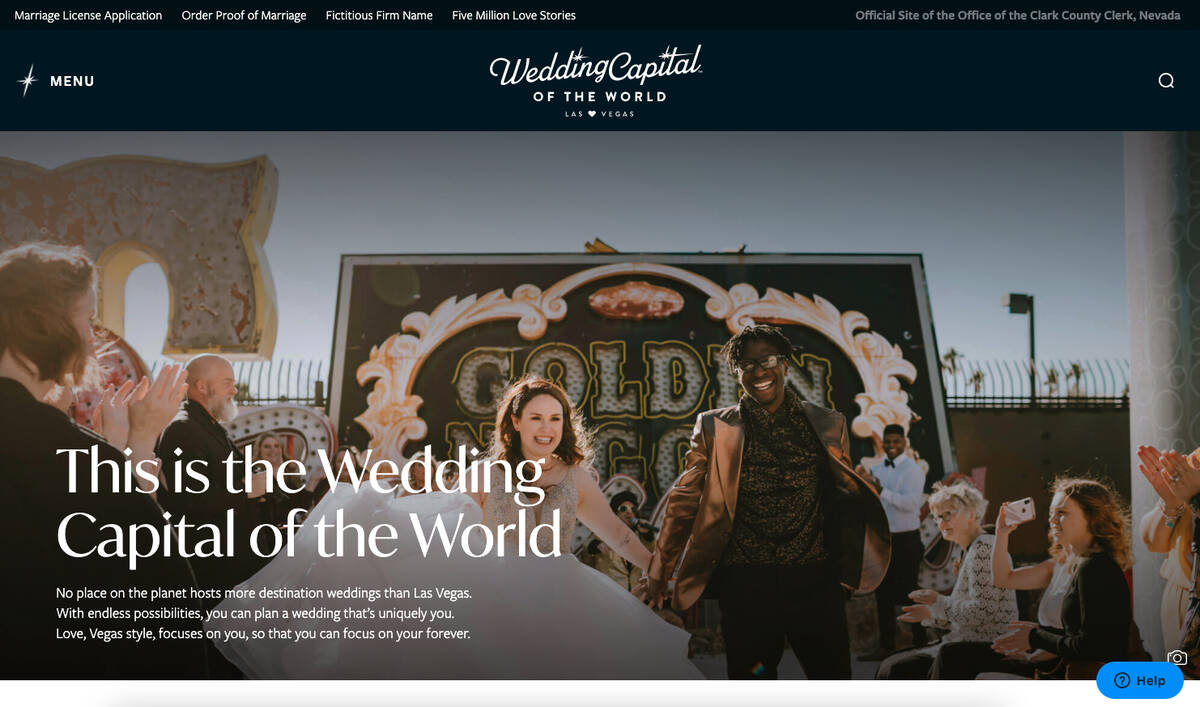 (Boulder City Review) The Clark County clerk’s office recently received an award from American City & County for its Weddings.Vegas website, recognizing its positive impact on the community and constituents.

Though it’s no secret that Las Vegas is considered the “wedding capital of the world,” it still takes a bit of effort to get the word out to those seeking to get married exactly what they can expect when they come to say “I do.”

That has gotten a bit easier after a two-year concerted effort by the Clark County clerk’s office to redesign its website and create Weddings.Vegas, which provides all the information a couple needs to marry.

“It’s visually attractive, easy to manipulate and there are multiple ways to get that information out,” said Lynn Goya of Boulder City, who serves as the county clerk.

The newly redesigned website was recently presented with an America’s Crown Communities Award by American City &County. It was one of five awards presented to governments for positively impacting their communities and constituents.

The challenging pandemic-afflicted work government administrators faced, and the projects’ innovation, scope and impact were factors considered when presenting the awards, according to American City &County.

KPS3, the Reno-based agency that helped create the website, also won a 2022 gold ADDY from the American Advertising Federation Reno for its work.

Among the highlights of the weddings website is a feature to translate the text into other languages, said Goya, noting that the county has a worldwide audience. In the past two years, the clerk’s office issued 129,000 marriage licenses, of which 80 percent were for those from out of town.

On Feb. 22, 2022, the clerk’s office issued its 5 millionth wedding license and those love stories are featured on the website along with information about various places to wed, tips for looking your best, wedding shopping venues and the history of weddings in Las Vegas.

In addition to information about getting married, the clerk’s office serves as the public record keeper for all county boards and commissions, coordinates public records requests, handles notary bonds and allows people to apply for fictitious firm names, Goya said.

When redesigning the website, she said they worked to find the best way to reach millennials, the office’s target audience, as well as make it simpler for all couples to use. Goya said it also was essential to make the website “mobile first” as most people use their phone to look something up before heading to a computer or laptop.

She said the design has a bit of a midcentury modern look, paying homage to the city’s heritage.

Through the website, visitors have access to a “huge amount of data,” and Goya said they worked diligently to ensure that it was clean and comprehensive.

“What I realized is the clerk’s office is kind of a historian for the county,” she said.

Goya also was recently singled out by the International Association of Government Officials for overall excellence in county government.

According to Carl Bates, who nominated Goya for the award, since taking office in 2015 she has “worked diligently to streamline services, reduce the office’s impact on the environment and save taxpayers money while still improving the experience for our constituents.”

Goya also worked with the Legislature to create a promotion fund that generates more than $1 million a year, and established a public/private partnership with industry professionals that evolved into the Las Vegas Wedding Chamber of Commerce. After declining for more than 20 years, the county saw an increase in the number of weddings last year.