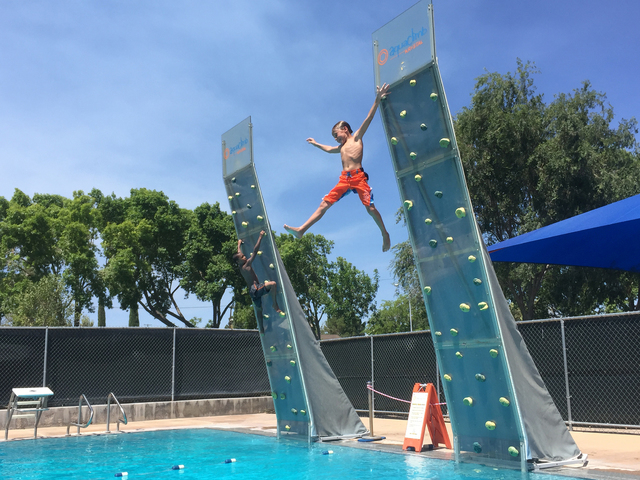 You don’t have to go outside to know that summer is here.

Although summer officially began Sunday, temperatures around the area have left the impression that it’s been here for a few weeks at least.

And with temperatures expected to hit 110 degrees in Boulder City on Friday, the mild spring once felt throughout the community now seems like a distant memory.

According to the National Weather Service, Saturday’s official high of 113 degrees tied a record set in 1940. The average temperature for this time of year is about 100 degrees, the service’s meteorologist Justin Pullin said.

“We’ll be pushing about 10 degrees higher this weekend,” he said.

The triple digits are here to stay until the end of August, and Boulder City Fire Chief Kevin Nicholson said the transition from spring to summer can get hectic.

Those who visit the Lake Mead National Recreation Area are encouraged to drink plenty of water, avoid caffeinated and alcoholic beverages, and to wear light, loose-fitting clothing, with a hat and sunscreen.

Hiking is not recommended during the extreme heat.

And now that school’s out for the summer, children and adults also can find relief from the sweltering sun at the Boulder City pool. Sheri O’Berto, the pool’s aquatics coordinator, said June and July are the pool’s busiest months because the weather gets hotter and kids are out of school.

“When you can’t do anything else because it’s so hot, you come to the pool,” she said. “It’s like rediscovering an old toy.”

“There’s a lot of fun stuff to do here,” 10-year-old Davey Garrett said before he leaped off the climbing wall into the cool, blue water. “When I jump off, I get a tingly feeling like on a roller coaster.”

As many as 150 people typically come to the pool on Fridays and Saturdays, O’Berto said. Garrett said he visits the pool almost every day.

“I think boredom sets in in the house after a while. Parents tend to want their kids to get out, too, so this is a place where they can hang out with their friends in an environment that’s relatively cool,” O’Berto said. “Sometimes you get big groups when it’s a little cooler, and other times it’ll be hot … and nothing.”

“Hopefully things will calm down a little bit. We’ve been watching the weather, and that heat’s supposed to come back with a little bit of humidity.

“I think it is going to warm up, so hopefully everyone will get acclimated within the next couple weeks,” he said. “Stay hydrated, stay indoors if you can. Just those normal heat-related things. Everybody just practice those basic skills and it’ll cool off again for us soon.”

More information about the Boulder City pool can be found at www.bcnv.org.

A flash flood warning for the area has been issued by the National Weather Service. It begins Friday afternoon and continues through late Saturday night.