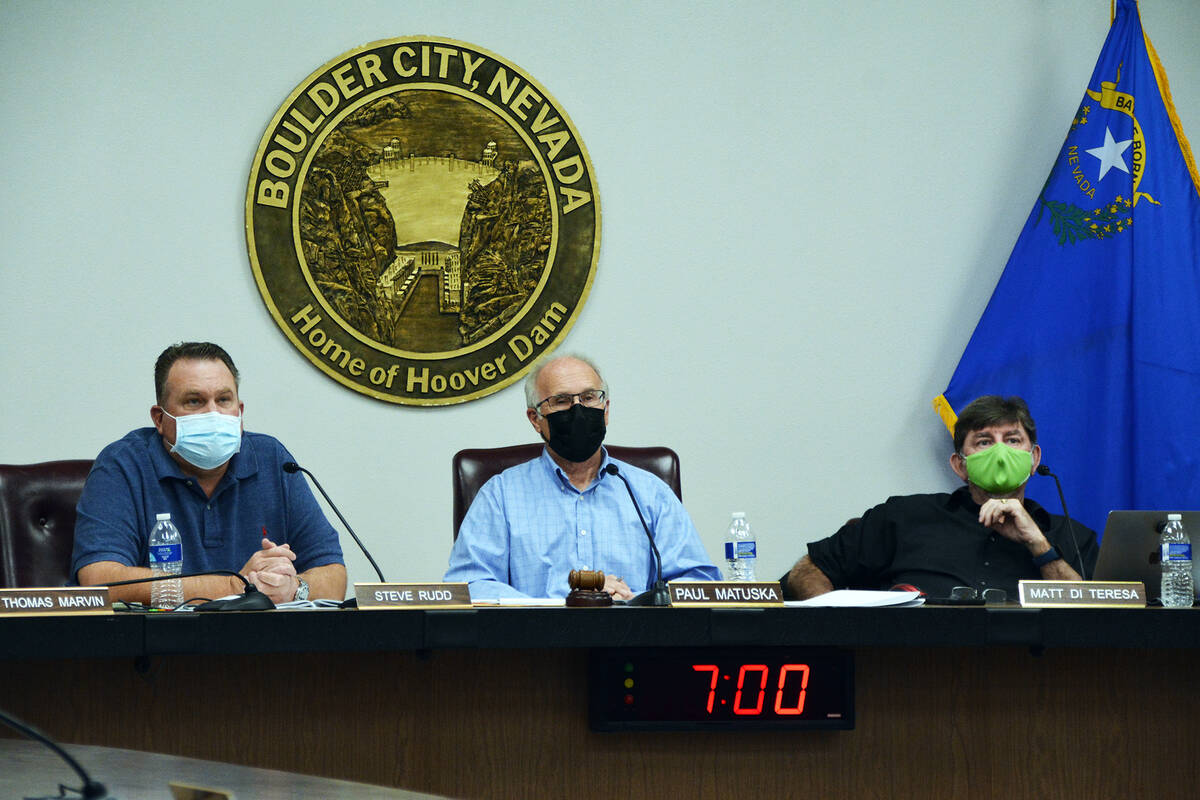 “Boulder City Family Mortuary would be out of business completely if, in 2013, I had not moved to Henderson,” said owner Tyson Smith at the Oct. 20 Planning Commission meeting.

“The reason I put this out there was basically to get shut down again and to show people I am trying. … I just hope the community opens its eyes to the problems we’re gonna have before it’s too late because it is on our doorsteps and it’s bad. … What’s going to happen when we have nowhere to put our deceased people?” he said.

Smith said he had to tell 30 families “no” in the past three weeks because his facilities in Boulder City and Henderson are at capacity. He said when this happens people have told him they think he’s just being “lazy.”

At the Oct. 20 meeting, more than 20 residents voiced their disapproval of amending the city code to allow for funeral homes and mortuaries in the R1 and C1 zones.

“This is a bad idea,” wrote resident Ed Cox in an emailed public comment. “Please vote against it.”

Smith said he applied for the amendment to lay the groundwork should a piece of property come available. Currently, he has two pieces of property in mind: a vacant building at 1404 Colorado St. and the Palm Boulder City Mausoleum and Columbarium, 551 Adams Blvd.

“If you decide to pass this amendment and the City Council passes it, our small town image, our quaint and unique little Boulder City will be forever changed,” said Nancy Dineen, who lives on Denver Street near the Colorado Street location. “The advantage will be of the business over the good people of Boulder City.”

Real estate appraiser and longtime resident Britt West said according to his research a funeral home and mortuary in a neighborhood would lessen property values there by 6 percent.

Others said they supported having Smith’s business in a residential area.

Rich Loudin said he has been the neighbor of Smith’s business for 18 years and there have never been any issues with a funeral home next door.

“They have been courteous, kind and wonderful neighbors, and (I) feel he would have no negative impact on the neighborhood wherever he was,” he wrote in an email.

“People who are alive have a much greater chance of hurting you than people who are dead. … We should make things easy and simple,” said Rose Ann Miele at the meeting. “Tyson should be allowed to have a mortuary. I’m not afraid of dead people.”

Miele did say, however, that she didn’t think it was necessary to have to change an entire piece of the code to make that mortuary possible.

“As a longtime resident, I would love to see a larger mortuary,” Sherrill Graff wrote in an email. “Boulder City mortuary, Tyson Smith and those who work with him can see the need for larger facilities.”

At the meeting, Smith said he had no hard feelings toward those who objected to the proposed text amendment, but he said what he heard made him feel like they think he is a public nuisance.

“What I hear tonight is I am a public nuisance for many citizens of this town,” he said. “It hits me hard. Twelve years ago, I dedicated my life to this town. I’m not a normal employee. I’ve got this cellphone 24 hours a day, 365 days a year. How many times have I walked away from dinner with my wife to serve the community, and this is the stuff I get?”

During the Planning Commission meeting, some of the commissioners said they disagree with changing city code to allow for this rezoning.

Commissioner Steve Rudd said he was more comfortable voting for a specific property, and Commissioner Tom Marvin said he thought the change would undermine the neighborhood zone.

Commissioner Ernest Biacsi said the impact of parking and the procession of cars that could come from a funeral home being there should be considered. He also said he didn’t see a need to change the code.

“I think Mr. Smith is spot on,” said Chairman Paul Matuska. “It’s a very difficult proposition to run a business when almost no matter where you go you’re going to have residents who will oppose it.”

Matuska also said he did not think “casting a wide net” with this text amendment was a good idea.

It will go before City Council at a future meeting.

In 2020, he applied for the building at 1404 Colorado St. to be rezoned to allow for funeral homes in the C1 zone. City Council denied it at its May 29 meeting.