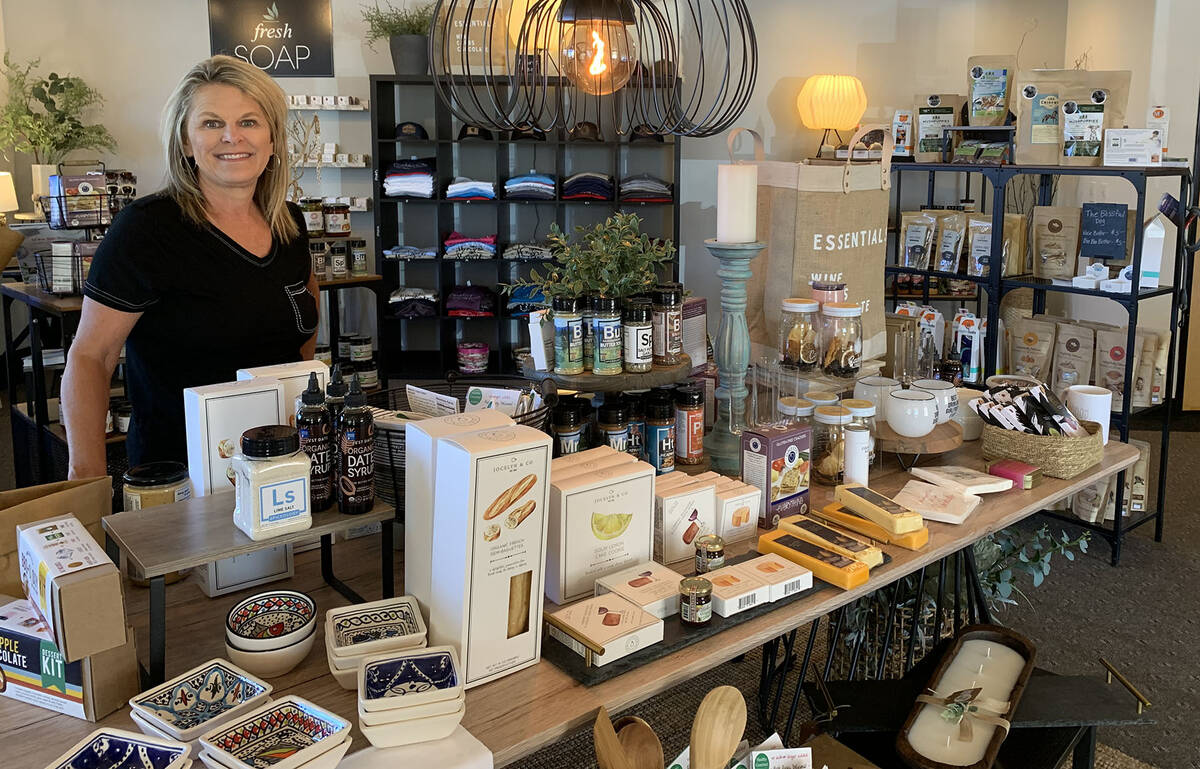 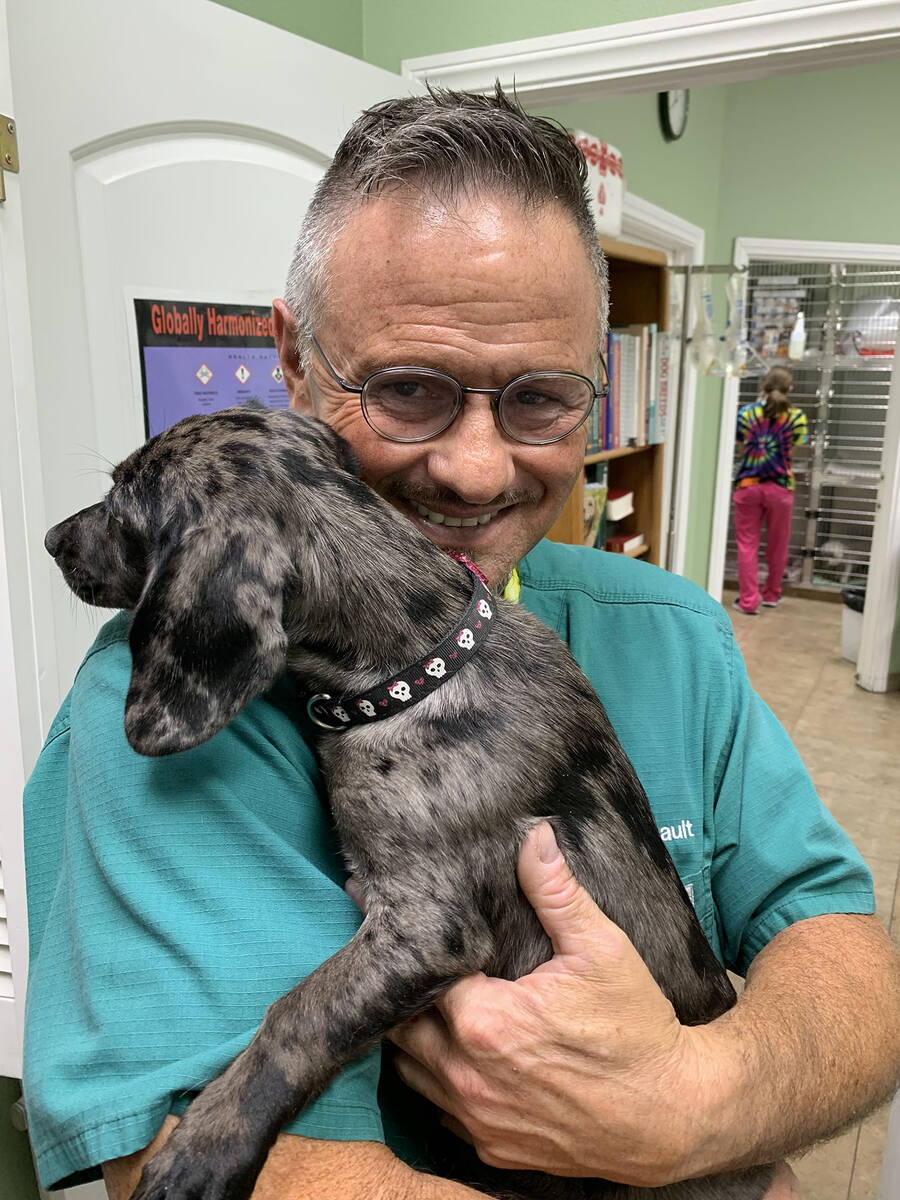 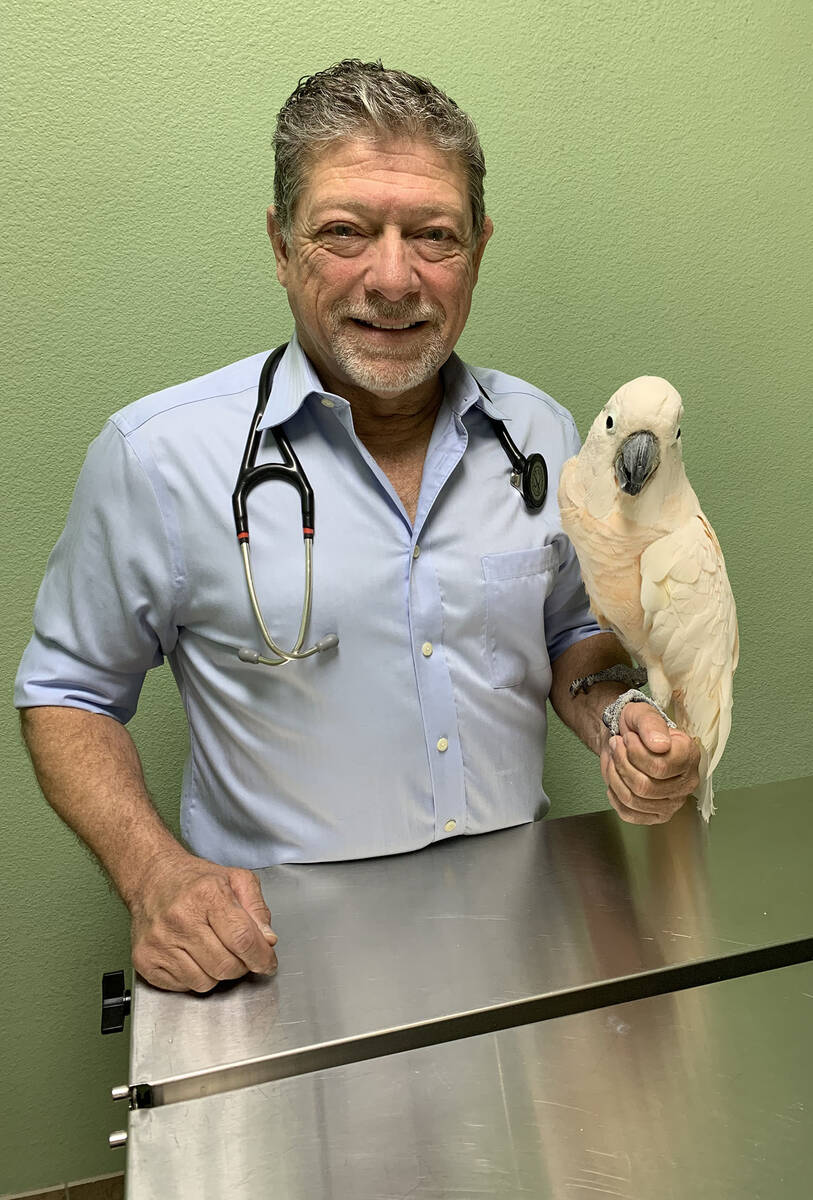 (Hali Bernstein Saylor/Boulder City Review) Dr. Dominic Cacioppo, who specializies in exotic animals, recently joined the practice at the Greatful Pet Animal Clinic in Boulder City. Among his patients on July 21 was this parrot.

If Sage Boutique &Gifts were a song, it would be “My Favorite Things” from “The Sound of Music.”

The new boutique is filled with items that will inspire shoppers — just as they did for owner Michelle Gemmill.

“It’s a store of our favorite things,” she said. “We have to love it in order for it to sell.”

She said she is always looking for more unique items to showcase — focusing on local vendors whenever possible — and will do her best to accommodate what shoppers want. She can even do special orders.

“Every day there is new stuff,” Gemmill said.

She also made sure to include a gift wrapping station and said she strives to keep items in the store priced fairly and affordable. Most items range between $5 and $40, she said.

Gemmill said she decided to open the boutique after a recent vacation in Texas, where she visited the Magnolia Market at the Silos in Waco.

Though it wasn’t her original plan to open the boutique, she does have retail experience, having managed the Experienced Merchandise thrift store with her friend, Marteen Lopez.

She officially opened in mid-May and said she hopes to offer some type of special event once a month. Last week, she hosted a sip and shop evening.

Gemmill said she chose the name for the boutique because of her love of gardening — she also owns Seed to Table — and because Sage means wisdom.

At the moment, most of the staff consists of family; two of her three daughters and her mother are helping her run the store.

Drs. Bruce Henault and Dominic Cacioppo’s natural love of animals is evident to their furry and feathered patients at the Greatful Pet Animal Clinic.

An ultrasound specialist, Henault used to travel to clinics and said he had always liked Boulder City. When it came time for Dr. William Flannery to retire and sell his business, it just made sense. Henault took over the business at the beginning of the year.

“It was the right place at the right time,” he said.

He has been friends with Dr. Dominic Cacioppo for more than 25 years and asked him to come aboard after Cacioppo sold his practice, Park Animal Hospital, in March.

Another veterinarian will be joining the clinic later this year. Henault said this will allow people to see the same doctor most of the time.

“We’ve seen their dog and are acquainted with them,” he said.

The Greatful Pet is a full-service veterinary clinic, offering everything from routine care to X-rays to surgery services for most animals.

Henault works primarily with dogs and cats and is frequently — and affectionately — called the Chihuahua doctor.

He said he has eight Chihuahuas at home, all with some type of disability or illness, most of which were surrendered by their owners. He said it’s kind of like a hospice for the dogs, but he calls it the Chihuahua farm.

Henault also has a Sphynx cat.

Cacioppo works with exotic animals including rabbits, rats and snakes, and specializes in birds, including birds of prey such as a falcon, which was seen recently.

“If it can walk through the door, we’ll see it,” he said, adding that pigs and monkeys are the exception because they don’t have the necessary equipment and facilities to treat them.

Cacioppo said he is driven and gratified by being able to help the animals and the people who own them.

“This has always been where my skills have lied,” he said of veterinary medicine. “So this is what I do.”

Henault has the same feelings about keeping animals healthy.

“People are the challenge,” he said with a wink and sly grin.

He said he finds performing surgery and seeing successful results one of the most gratifying parts of his work.

Henault said he has been able to remove eyes or amputate a limb and see a dog go on to live many more years.

Cacioppo said most of his clients have been with him for 15 or more years. This has enabled him to build their trust as well as empathy for what they experience with their pets.

It’s that empathy that Henault says is one of the most difficult aspects of their job. He said they grieve along with pet owners when it comes time to say goodbye.

Even in his spare time, Cacioppo said he is surrounded by animals and living things. He has an African gray parrot and saltwater aquariums where he raises many varieties of coral and seahorses. At one time he also had an aviary with roughly 100 birds.

Henault said he enjoys boating and spending time on Lake Mead when not working.

Henault went to the Ross University School of Medicine in the Caribbean and finished his studies at Oklahoma State University.

Cacioppo studied medicine at the University of Missouri in Columbia. He moved to Las Vegas in 1987 from Kansas City, Missouri, and opened his veterinary practice in 1991.

The Tap restaurant and sports bar has been sold and the new owner is in the process of making a few changes.

Grant Turner, who opened The Tap in 2017, said the sale was prompted primarily by a lack of time.

He said he felt he was doing too much and not giving it his full energy.

“It has so much potential and I feel like I’m holding it back,” he said. “Selling it freed me to move on, not just in business but overall. It will give me a better work-life balance,” he said.

In addition to The Tap, Turner has The Dillinger Food and Drinkery and is in the process of transforming a former antique store in downtown Boulder City into a tavern.

New owner Elise Laufmann said some changes are planned but that the establishment has “good bones.”

She said she doesn’t plan to change everything, but has hired a new chef and new manager. They are working on a new menu.

Turner said he is grateful for the community’s support over the years as well as the staff. He also praised the work of the local skilled laborers and craftsmen who helped him bring his vision for The Tap to fruition.

“They are one of Boulder City’s best-kept secrets. They are the bomb,” he said.

Owner Ken Simpson wrote, “Loved every minute of it, and will continue to until I push the last plate out.”

He also wrote that the restaurant has had to stray from its original intent from the start, which was “quality meals and drinks at an affordable price point.”

He wrote that the decision was based on the rising costs to operate and that he has no regrets.

“What a great experience.”