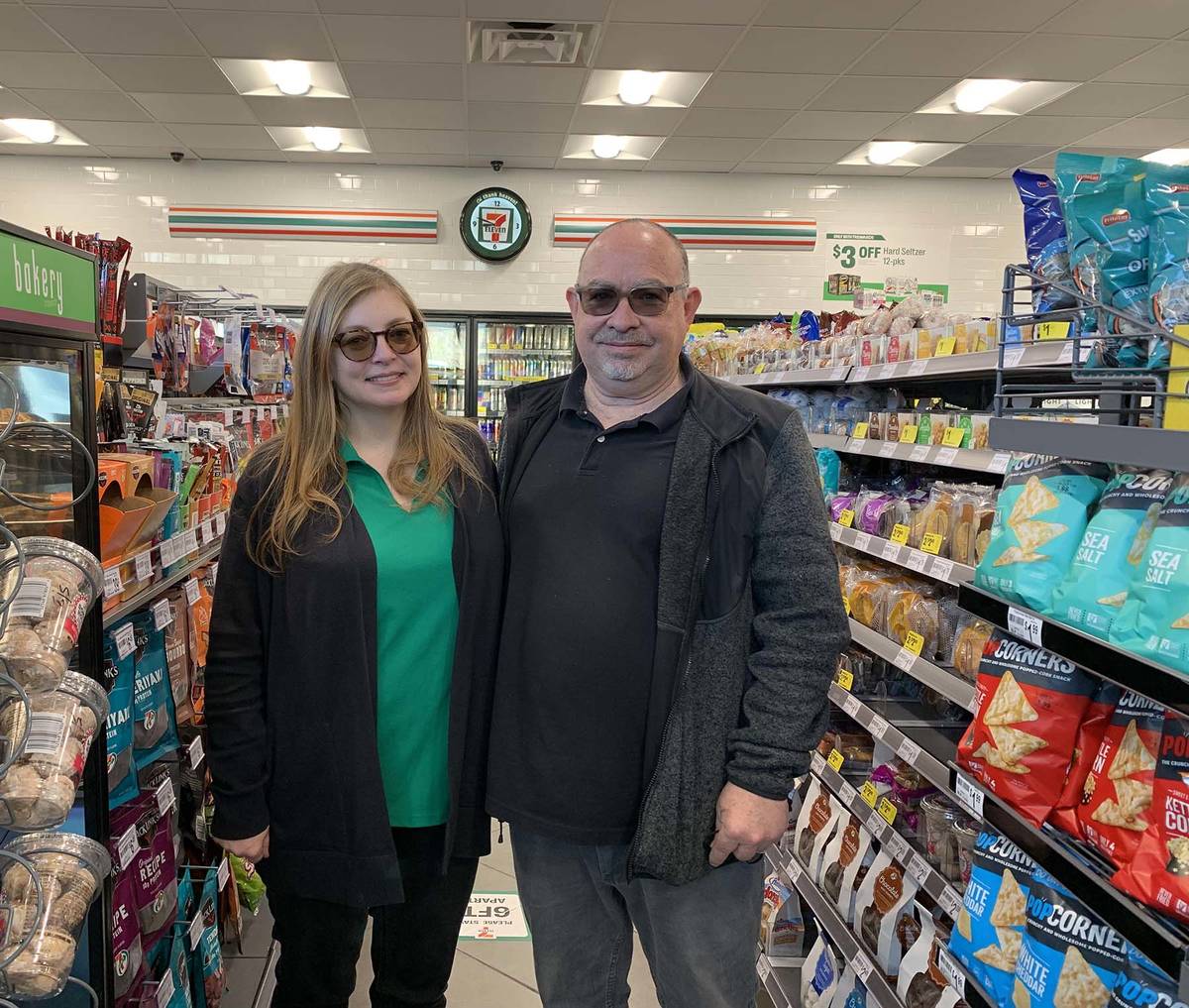 (Hali Bernstein Saylor/Boulder City Review) Amy and Tom Carvalho opened their new 7-Eleven at 1025 Boulder City Parkway in March after operating the store at 849 Nevada Way for the past 17 years. 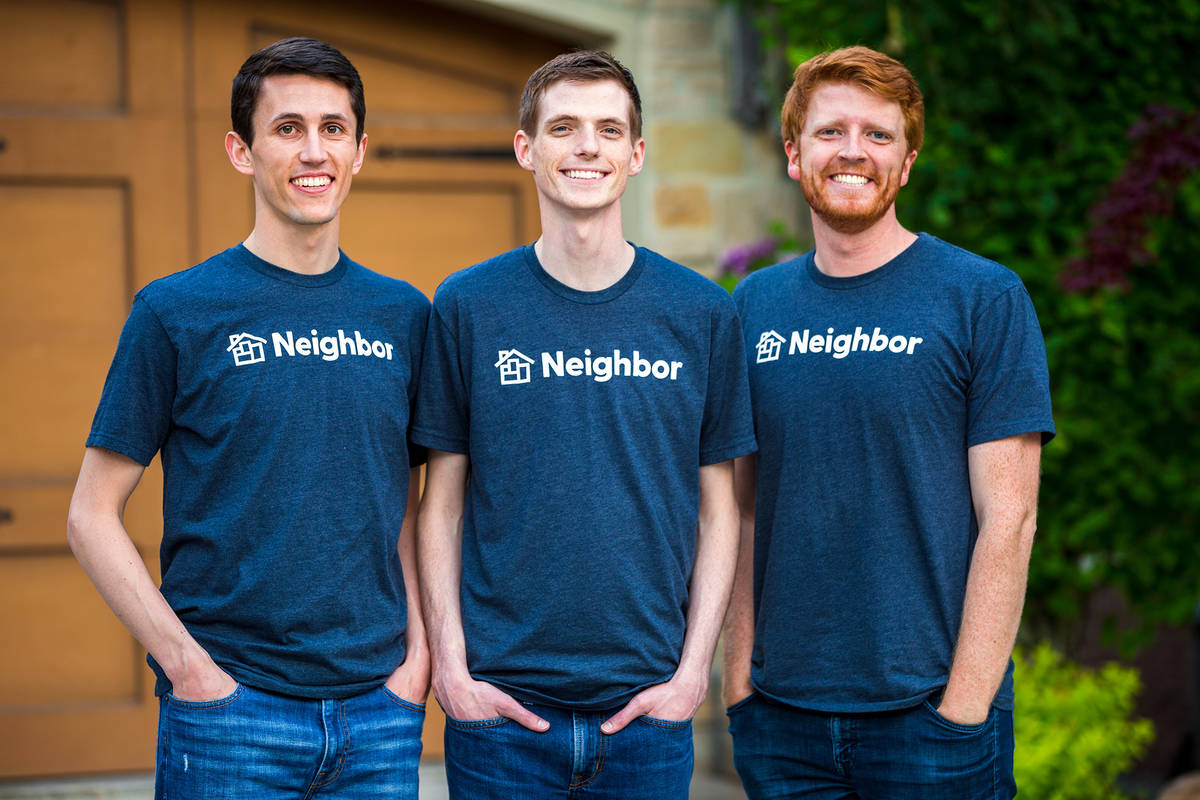 Neighbor Neighbor founders, from left, Joseph Woodbury, Colton Gardner and Preston Alder, recently secured $53 million in Series B funding from Fifth Wall, a venture capital company. Neighbor is a self-storage marketplace with hosts all over the country. 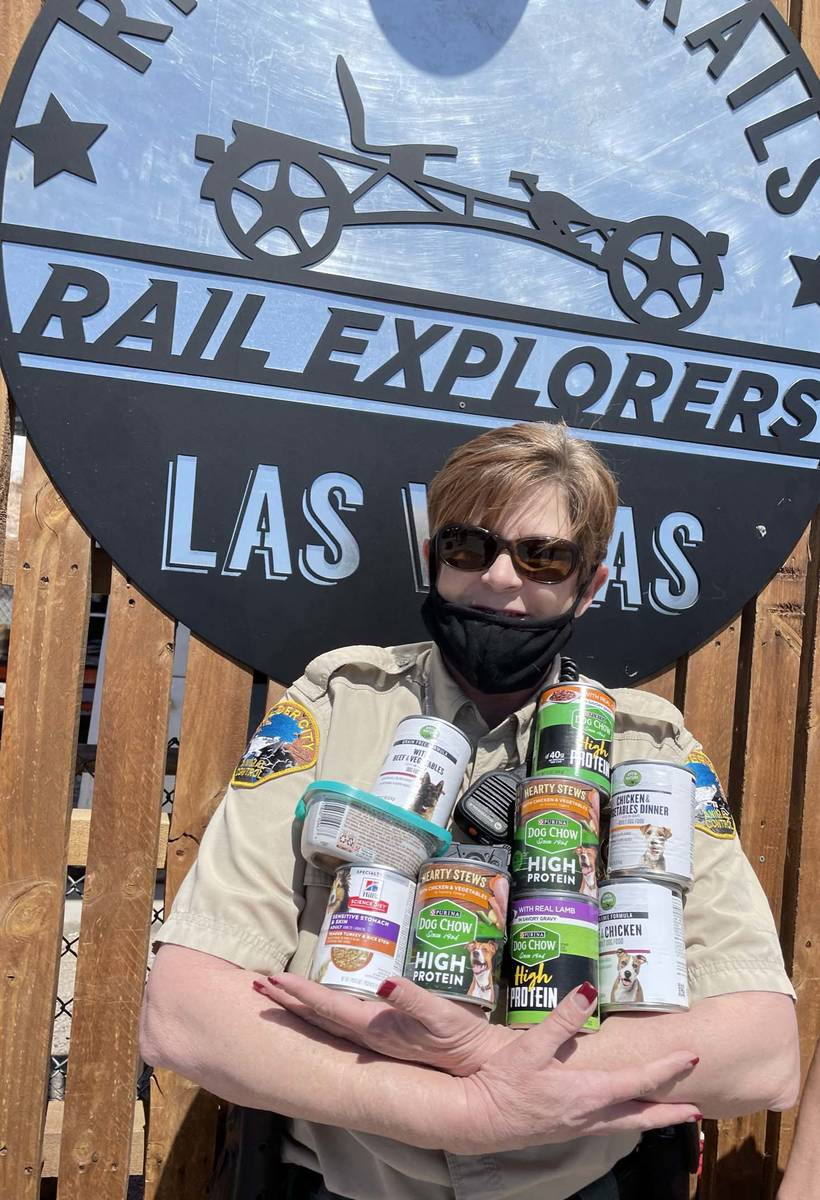 (Rail Explorers) Ann Inabnitt, supervisor of the Boulder City Animal Shelter, gathers up the first donations from Rail Explorers’ Dogs Ride Free campaign. Those who donate at least two cans of Purina dog food will receive a special T-shirt and bandana for their dog. 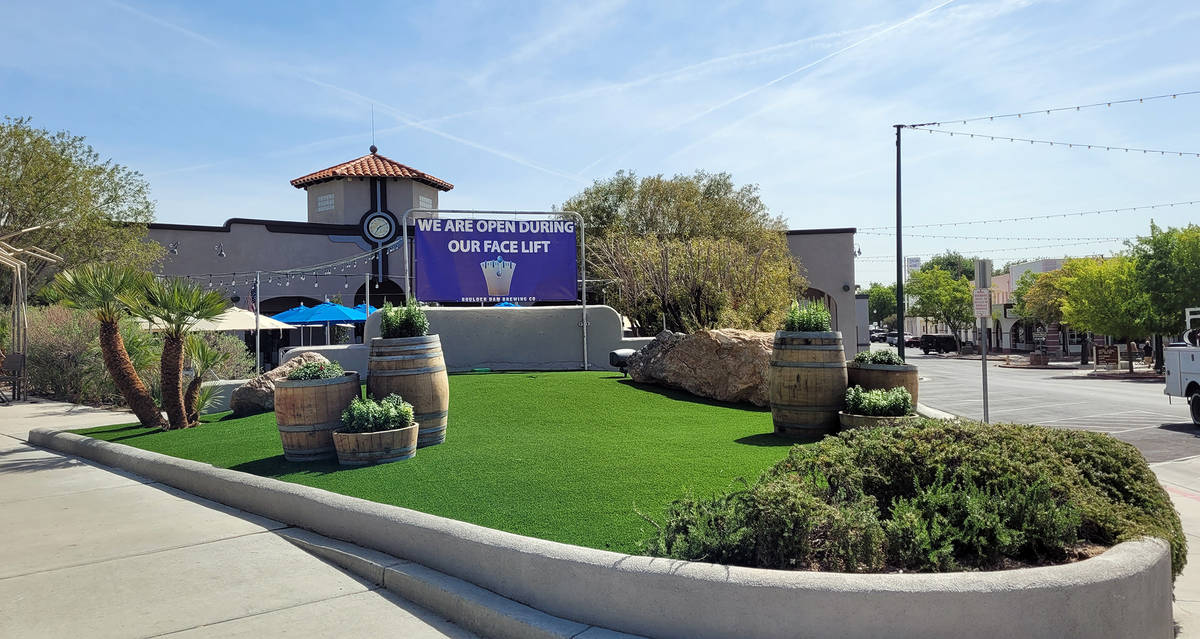 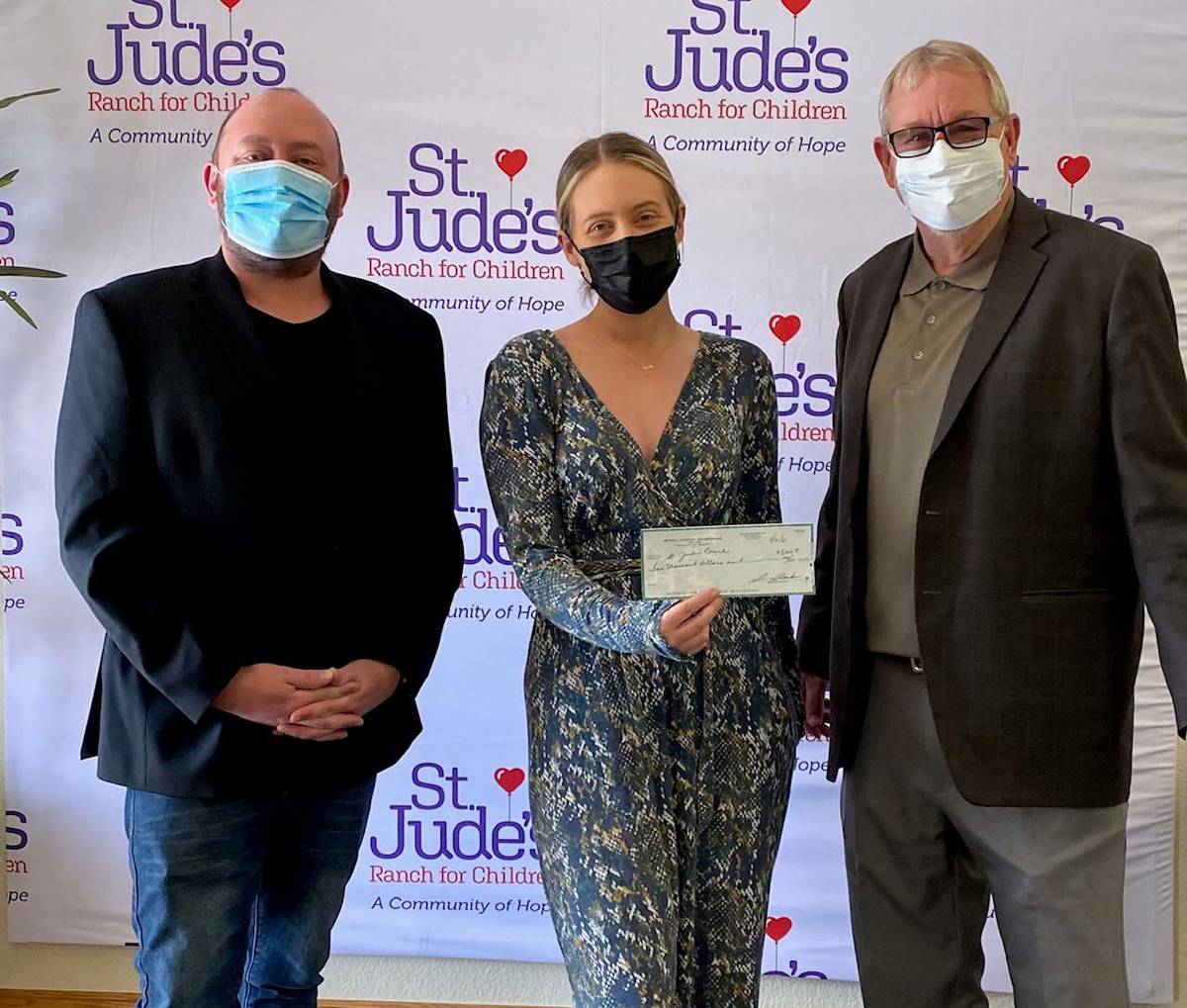 For the past year, Tom and Amy Carvalho, who own the franchise, have been working to get the store moved from its previous location on Nevada Way at Elm Street.

According to Tom Carvalho, the idea of a new corner, a new store and a new location was a winning combination.

Although the actual size of the store is about the same, the two said they were able to increase the number of gas pumps from eight to 12, add diesel fuel, as well as bring in some new features, including an oven to bake cookies and pastries and a more extensive assortment of artisan coffee drinks that rival traditional coffeehouses.

Another new service for the store is delivery, which has a few hiccups at the moment. Because they rely on traditional food delivery providers, it can sometimes take upward of one or two hours to receive an order.

“Your Slurpee will be melted,” joked Amy Carvalho.

Tom Carvalho said a better alternative is to order in advance on the 7-Eleven app and pick up items at the store.

Visitors at the store will see plenty of their favorites, including staff members. They said all 11 of their employees transferred from the old location.

In the month since they have been open at the new location, the Carvalhos said they have seen more customers, including those headed to Lake Mead National Recreation Area.

“A lot of people turn left at the light,” Tom Carvalho said referring to the corner where they are situated.

As for the future of the building at 849 Nevada Way, Tom Carvalho said they don’t know.

“7-Eleven owns the land and location,” he said. “They are using it for training. After that, I don’t know.”

Still, the two feel they have a certain responsibility to keep track of plans for the site and say they will let the community know when, and if, they learn anything.

The Carvalhos bought their first franchise in January 2004. They currently own three stores, but said they are selling their interest in the one at 3421 E. Tropicana Blvd. so they can concentrate on the one in Boulder City and the one at the corner of Boulder Highway and College Drive, both of which are among the top 10 locations in the area’s southern region.

They credit their success to their “great customer base. We do our best to make them happy.”

In return, the Carvalhos said they support the community whenever they can.

“It’s amazing this store does so well with a small population (in the immediate area). We have been very lucky for that,” Amy Carvalho said. “… we love to be in Boulder City.”

A Boulder City High School graduate is helping to build community across the country through a business he founded his senior year of college with some friends.

Joseph Woodbury, Preston Alder and Colton Gardner founded Neighbor, a self-storage marketplace, more than five years ago when they were all college students in Utah. It connects people with extra space in their homes to people who need to store items.

“Neighbor is essentially a huge marketplace for self-storage. … We’re the first hyperlocal marketplace. … It’s neighbors helping their neighbors,” said Woodbury, who grew up in Boulder City and is a 2011 BCHS graduate.

Series B funding is a type of equity-based financing where investors provide capital to a company in exchange for shares.

“Our firm ardently pursued the opportunity to invest in a transformative proptech business like Neighbor,” said Dan Wenhold, a partner at Fifth Wall. “Self-storage is the fastest growing segment of the commercial real estate industry for four decades running and Neighbor has already built an impressive business positioned to capture untapped demand for space in a smart and sustainable way.”

Woodbury said this money is “growth capital” that will allow Neighbor to provide more storage locations throughout the country.

“We … founded this with the intention to bring it to every city no matter how small because storage is one of the largest needs in the country,” he said.

During 2020, as commercial property owners experienced a greater number of vacancies, they were able to utilize Neighbor to repurpose the space to help cover their expenses.

In addition to helping people fulfill their storage needs, Woodbury said they wanted to build community.

“Growing up in the small community of Boulder City shaped that (desire). … Community interaction is what we need right now,” he said. “The most impactful thing is the community and neighbors being created through this.”

Woodbury said he, Alder and Gardner had the idea when one of them was trying to find storage space while in college. He found a friend who had space in his garage and was able to use it.

“He just thought, this is such a better experience, why doesn’t everybody do it,” said Woodbury. “It’s grown from there.”

Neighbor is based in Utah but has storage available throughout the United States, including Boulder City and Las Vegas. For more information, go to http://www.neighbor.com/.

Families are invited to bring their furry canine friends on their next ride. Those who bring a minimum of two cans of Purina dog food will receive a limited-edition “Dogs Ride On Rail Explorers” T-shirt and a bandana for their dog.

Rail Explorers offers three tour options: the daytime Southwest Ramble; the Sunset Tour and the Evening Lantern Ride. All rides start at the Nevada State Railroad Museum and continue downhill to Railroad Pass. Each tour also includes a ride back to the top of the hill in one of the museum’s historic trains, along with free museum entry.

Boulder Dam Brewing Co. is getting a new look that will be completed soon, said Todd Cook, owner of the restaurant and craft beer maker.

“The exterior of the whole building has been repaired and repainted,” he said. “The irrigation has been redone in the beer garden, along with a lot of landscaping work. New signage for the pub will be done as well.”

Cook said he and the current owners of the building worked together to decide what needed to be done. He said the only thing left is installing the new signage, which is still being created.

Recognizing the impact St. Jude’s Ranch for Children has on the lives of at-risk children and the affects the pandemic has had on the nonprofit, Mitchell, Stankovic & Associates of Boulder City recently donated $5,000 and Easter gifts for the families living at the Boulder City campus.

“Women and children were disproportionately affected by the pandemic and we, as a community and a nation, need to recognize, stand up and do what we can to get women back in the workforce and children back on a path to a successful future,” said Michael Stankovic, partner at the global strategic consulting company for credit unions. “MSA has been at the forefront of advocating for women and children globally for many years, we also want to ensure our local community and our beautiful state are in that vision as well.”

Stankovic was joined by Zach Christensen, MSA’s director of communications, to deliver the gifts and donation, which were accepted by Summer Cabrera, marketing manager for St. Jude’s.

“Just like women, nonprofits who rely on the generosity of donors were negatively affected this past year. We wanted to help bridge that gap in 2021 and beyond,” said Susan Mitchell, CEO of Mitchell, Stankovic & Associates.

Stankovic said the firm has been helping the community for the past 35 years.