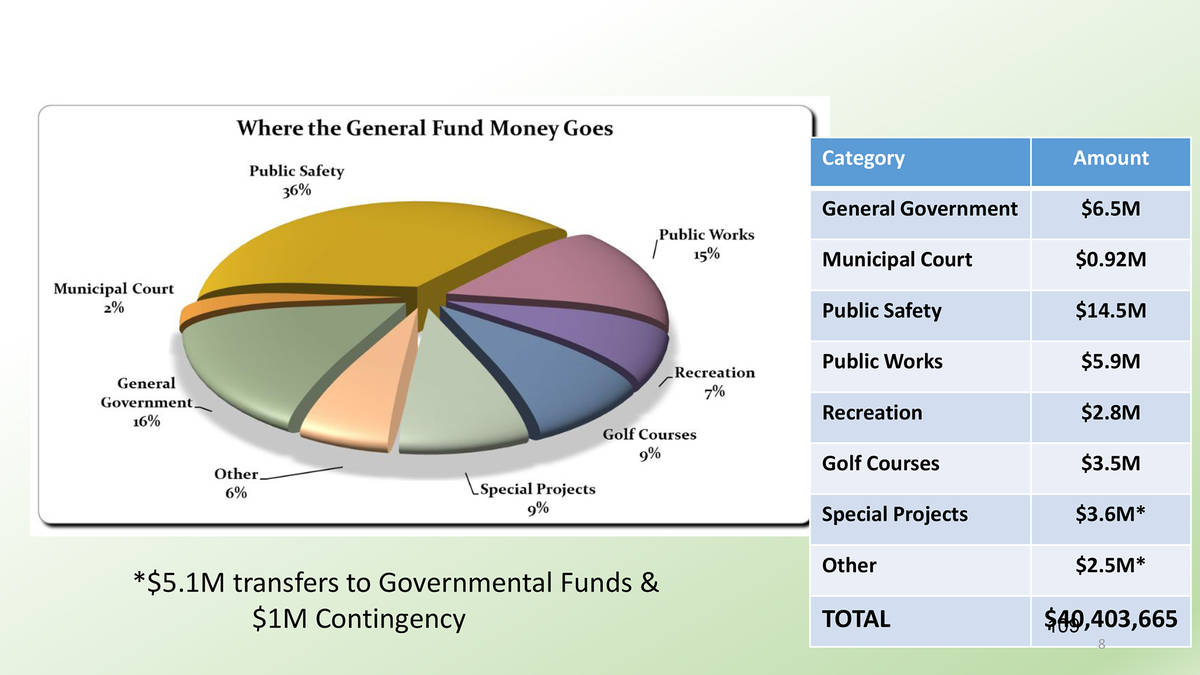 “The budget is better than last year as it does not have as much uncertainty as to how COVID will affect the city’s finances,” said Budget Manager Angela Manninen. “We are cautiously optimistic that the majority of the city’s revenue is beginning to return to pre-COVID levels.”

Recently, Finance Director Diane Pelletier said the city’s revenues were estimated to drop 9 percent instead of the 40 percent staff was expecting. Additionally, the city’s solar lease revenue is expected to hold steady.

One of the new positions in the proposed budget is a full-time building official with an annual cost of $153,118. At the special meeting, council unanimously approved adding it to the budget. The second is an office assistant for the administrative services department with an annual cost of $83,107. Council has yet to make a decision on that position.

The proposed budget also includes $7.3 million in transfers to other departments.

Transfers are funding set aside for a specific use in the future. They are not money that is being paid out.

She said the money going to the special revenue fund this year includes $637,976 to risk management, $150,000 to compensated absences, $250,000 to extraordinary maintenance and $495,000 to vehicle/equipment replacement fund.

The proposed budget also includes a $36.5 million utility fund budget. In it each utility has 20 percent in operating reserves. Staff is also planning on a $10 reduction on water service fees and a 3 percent reduction in electric revenues.

Council also approved $25,000 in increased funding for the public works operations budget to pay for entry signs to town and $1,000 in the City Council budget to support functions of the Civilian Military Council, an organization that allows local and county governments to communicate and share information with nearby Air Force bases about issues that could impact Southern Nevada.

Manninen said the next step in the budget process is a Wednesday, Feb. 24, staff-led citizen budget presentation, followed by a second special council meeting March 10.

The tentative budget needs to be submitted to Clark County and the Nevada Department of Taxation by April 15. If needed, council will have another opportunity to discuss the budget at a special meeting scheduled for April 28 before the final version comes before them for adoption May 25.