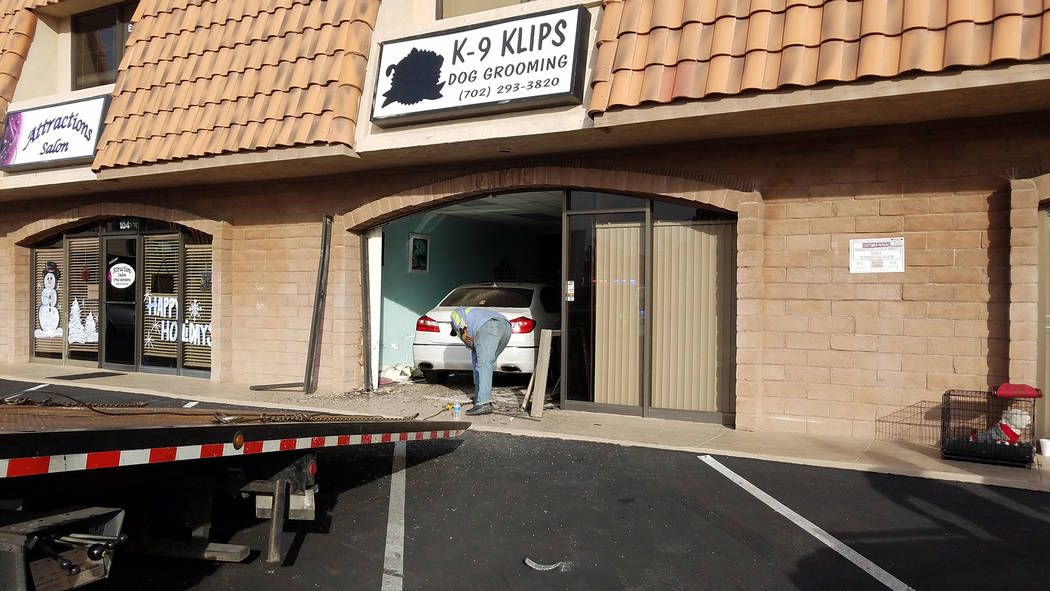 (Boulder City) A woman accidentally stepped on the gas pedal instead of the brake driving into K-9 Klips dog grooming at 1000 Nevada Way, Suite 103, around 8:30 a.m. Wednesday, Dec. 18. There were no injuries to people or animals inside the building.

The Boulder City Police Department and other Nevada law enforcement agencies are holding a Joining Forces event from Friday, Dec. 20, to Jan. 3 aimed at preventing people from driving under the influence.

“Whether it’s a designated driver, ride share or public transportation, everyone should make sure they have alternatives in place to avoid any chance of making a bad decision that could lead to unnecessary tragedy,” said Boulder City Police Chief Tim Shea. “Make sure you are able to celebrate the holidays safely by keeping the roads safe for everyone.”

The police department is dedicating extra deputies to look for drivers under the influence. Funding for these extra patrols is made possible by a grant from the Nevada Department of Public Safety’s Office of Traffic Safety.

A car crashed into a local dog grooming businesses around 8:30 a.m. Wednesday. Boulder City Fire Department responded to the scene at K-9 Klips, 1000 Nevada Way, Suite 103, after a car drove through the front window.

Lisa LaPlante, communications manager for the city, said the woman driving the car said she accidentally hit the gas pedal instead of the brake.

There were no injuries to the woman or sole occupant and dog inside the business. LaPlante said there also was no structural damage to the building.