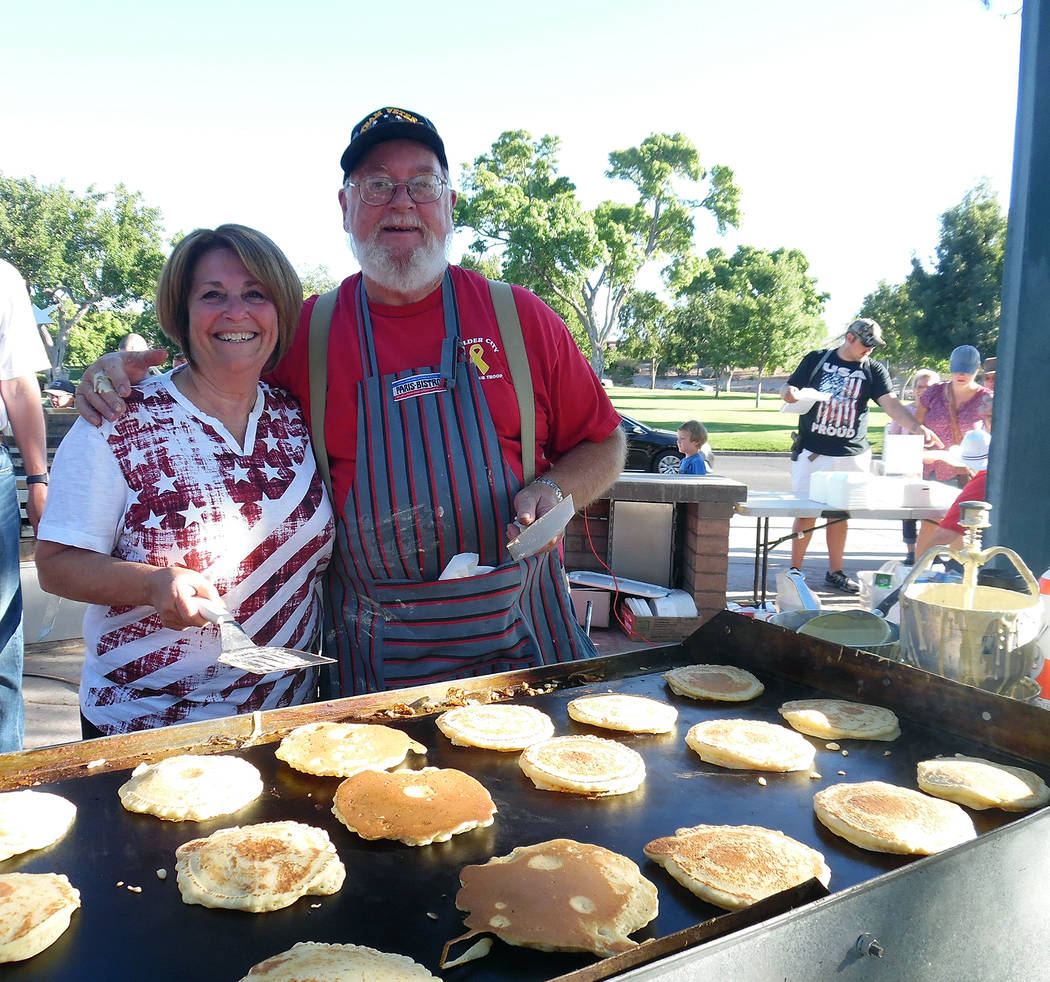 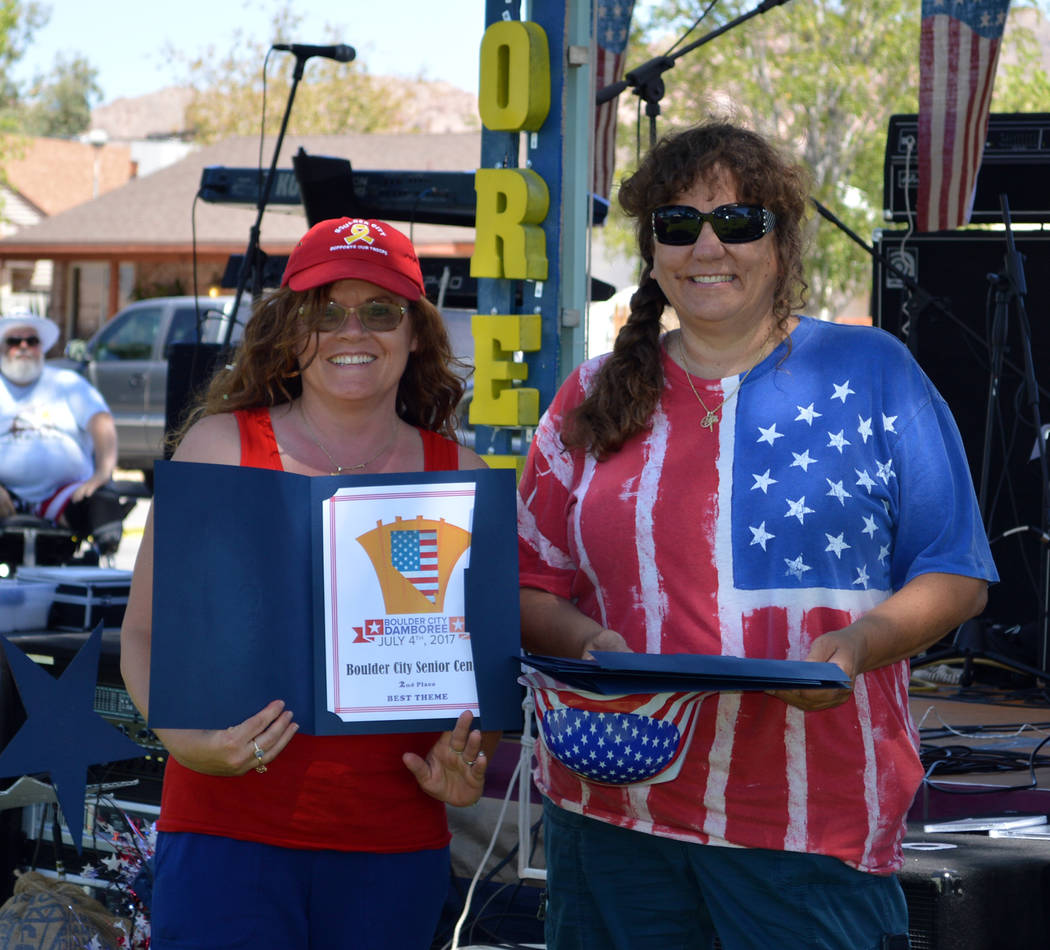 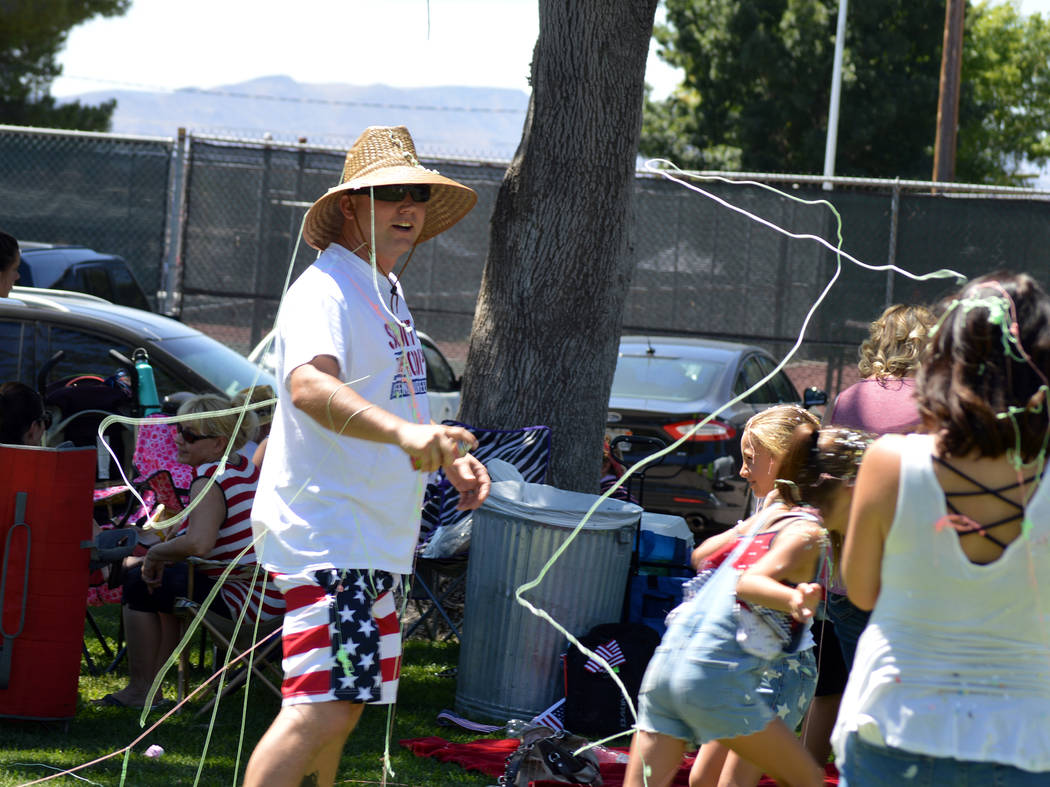 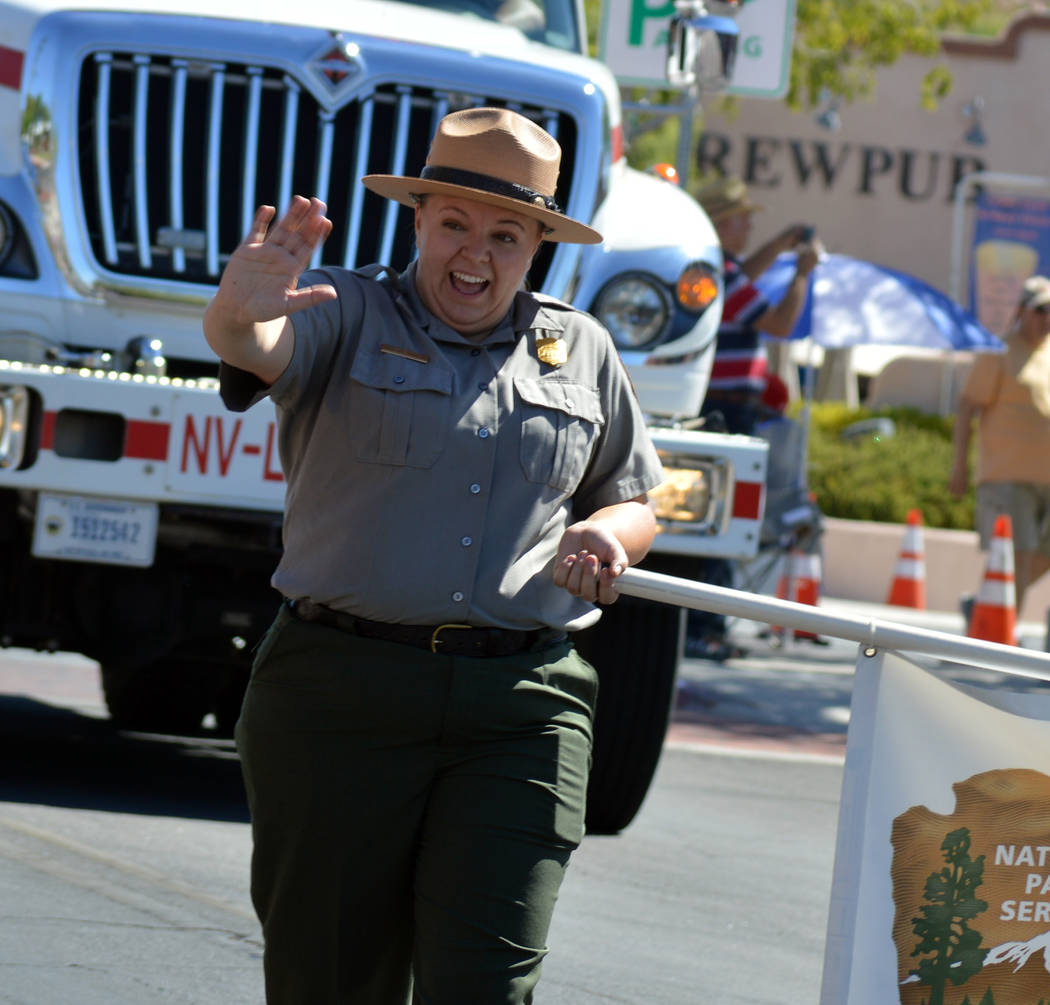 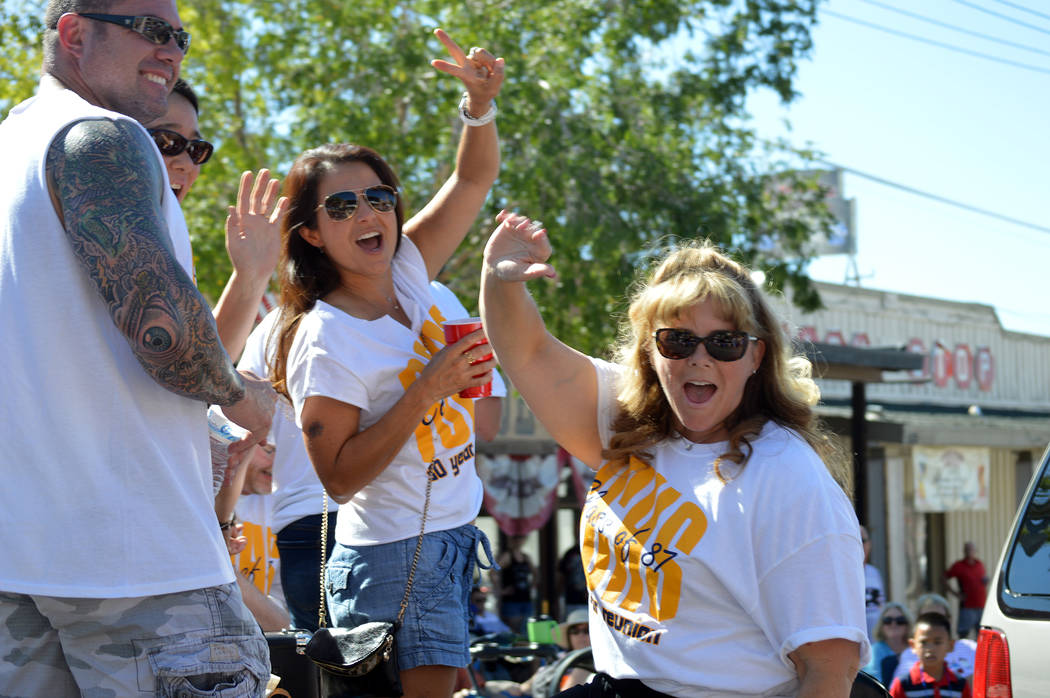 Celia Shortt Goodyear/Boulder City Review Members of the Boulder City High School's class of 1987 enjoy being a part of the Fourth of July parade in Boulder City. 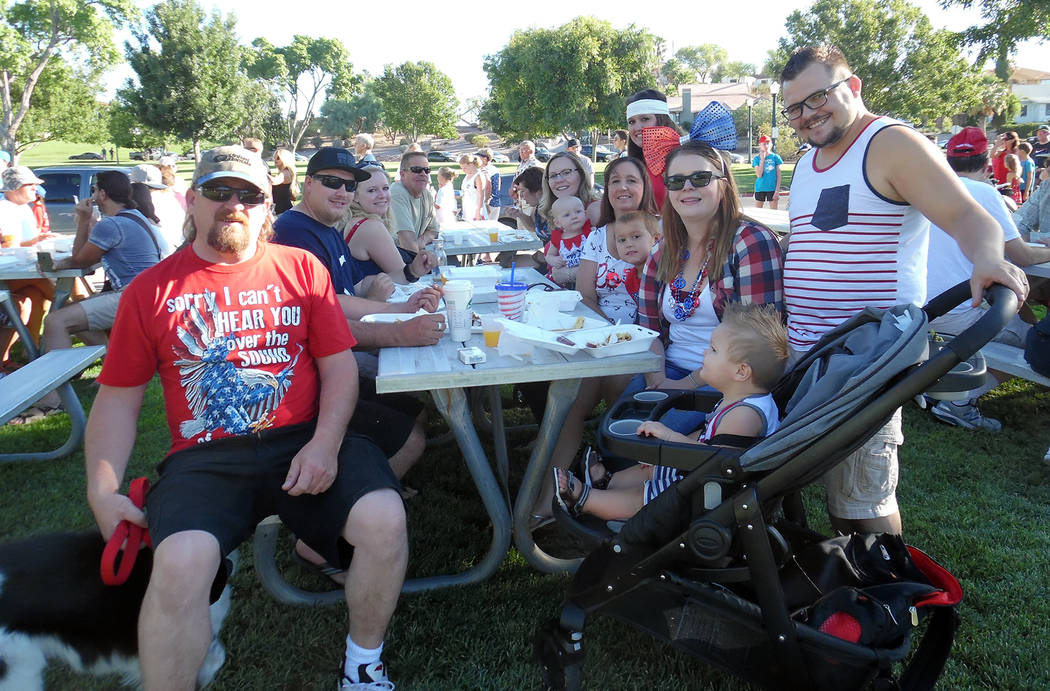 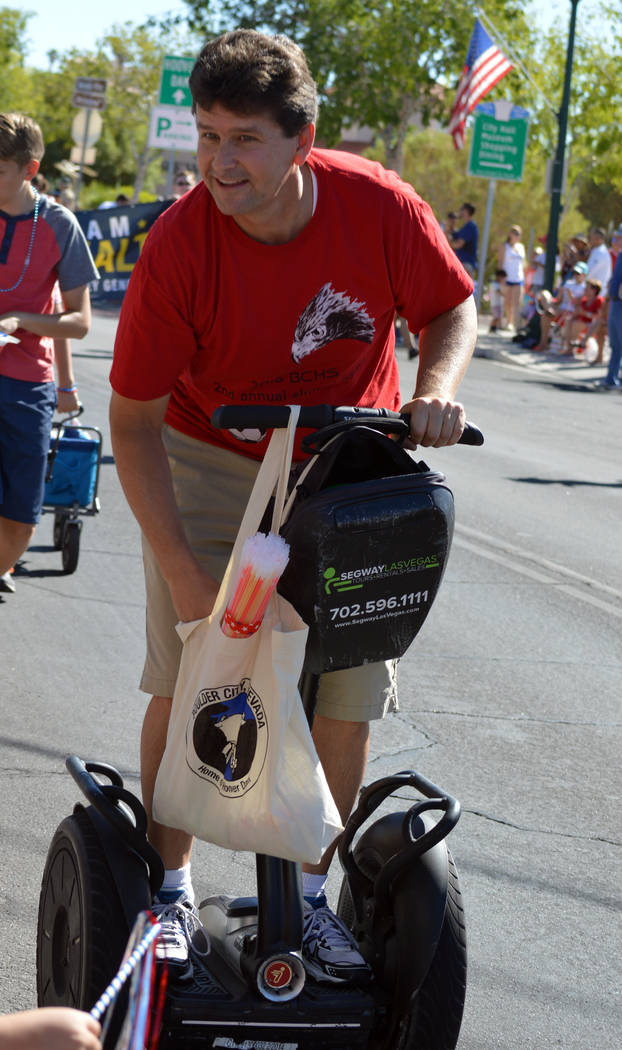 Celia Shortt Goodyear/Boulder City Review Boulder City Mayor Rod Woodbury hands out treats as he makes he way down the parade route on the Fourth of July.

As Councilwoman Peggy Leavitt said, “There’s no place like Boulder City for the Fourth of July,” and this year was no different, as people from all over Clark County came to enjoy the 69th annual Damboree.

The theme of this year’s celebration was “Volunteers, the Foundation of Community,” and its festivities and events ran from Tuesday morning until well after dark.

The Rotary Club of Boulder City started the day at 7 a.m. serving up a pancakes and sausage breakfast in Bicentennial Park.

Sandy Johnson, president of the club, said they have been providing the free breakfast for at least 40 years and expected to serve more than 1,200 sausages and pancakes to about 800 people.

”We spend every Fourth of July here,” said Rolonda Johnson of Henderson. “It’s our favorite place.”

She said the community atmosphere and variety of events that are included in the Damboree are similar to the festivities in her hometown in Utah.

Following the pancake breakfast, the Boulder City Veteran’s Flying Group did its annual flyover to start the parade, which traveled from Colorado Street to Nevada Way and then down Fifth Street through the ever-popular water zone.

For the Lopez family of Henderson, it was their first time seeing the parade, and they enjoyed it.

Lopez and his wife, Tracy, heard about the Damboree from their pastor, and they decided to give it a try. They planned to stick around and see what else they could do.

Following the parade, there were different activities, games and contests at Broadbent Park for adults and children.

“We’ve had an absolute blast,” said Darlene Yanez of Las Vegas. “It’s been our best Fourth to date.”

Yanez and her sons enjoyed the dunk tank hosted by the Boulder City United Methodist Church, with each of them getting soaked.

In addition to the games and activities for the kids, Belinda Merchant of Henderson said she and her family like to come because of the small town aspect of the Damboree.

“We come every year,” she said.

The Rutterbush family of Henderson is another that makes the Damboree an annual event.

“We do the parade in the morning and then all the rest,” Cory Rutterbush said. “It’s our ritual.”

The day was capped off with more games, entertainment and fireworks at Veterans’ Memorial Park.

The fireworks show lasted more than 20 minutes and brought plenty of oohs and aahs from the crowd.