(Hali Bernstein Saylor/Boulder City Review) As she waits for results of the Boulder City Council race to come in, Cokie Booth, seond from right, thanked her supporters during a pizza party at Vinny’s Pizzeria on Tuesday, Nov. 8, 2022. She was joined by nieces, from left, Hunter Spragno, Aubri Spragno, Taelah Fleckner, Kenah Fleckner and Rangler Rose Aquino. 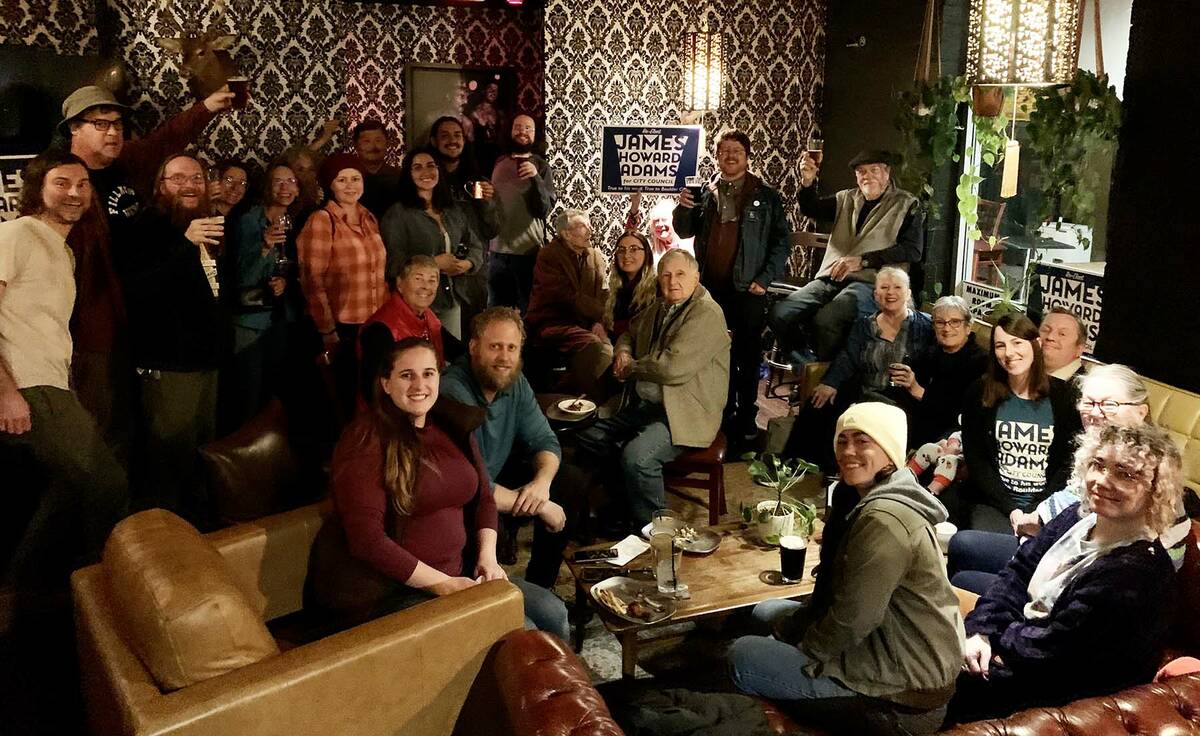 (Anisa Buttar/Boulder City Review) Councilman James Howard Adams, standing in back at right near his campaign sign, met with supporters Tuesday, Nov. 8, 2022, at the Cornish Pasty. They toasted the end of the campaign as they awaited results.

With results not final, Booth was hesitant to comment on the outcome but posted a message to her supporters on Facebook.

“We will wait until the last ballot is cast, and I don’t know which way the mail-in will take it,” said Adams. “No matter how it turns out, I’m proud of the work on the I did on council and on the campaign trail.”

City Clerk Tami McKay reported that 2,309 people voted on Election Day and that 2,761 mail-in ballots had been received in time to be counted by Wednesday morning.

In comparison, 1,169 ballots were cast during early voting for the June primary, with 5,159 total votes in the race that saw Sen. Joe Hardy elected mayor and Steve Walton elected to council.

Results were mixed for the three local questions on the ballot.

The first question, should the city sell 16.3 acres of city-owned land specifically for development of a grocery store and related retail uses, with proceeds being used for capital improvement fund needs, appears to have failed with 4,224 no votes, or 55.5 percent and 3,381 yes votes, or 44.4 percent.

The second question, should the city allow clean-energy technologies within the Eldorado Valley, appears to have passed with 3,855 yes votes, or 51.1 percent, and 3,681 no votes, or 48.8 percent.

The third question, should the city spend as much as $7 million for public safety facility improvements, including building a new police station and training area at the fire station, appears to have failed with 4.174 no votes, or 54.9 percent, and 3,418 yes votes or 45 percent.

One of the three local residents seeking state and county offices appears to have won their race.

Boulder City resident and Democrat Lynn Goya received 315,464 votes, or 52.1 percent, in her quest to retain the Clark County Clerk seat against Republican Bill Young, who received 290,032 votes, or 47.9 percent.

Democrat Brent Foutz and Libertarian Brandon Mills, who both sought the District 20 Senate seat, appear to have lost their bids with 23,542 votes, 35.1 percent, and 1,760 votes, or 2.6 percent, respectively. Republican Jeffrey Stone of Henderson was in the lead with 41,595 votes, or 62.1 percent.

Results of the local election remain provisional until Nov. 18, when City Council members will gather for a special meeting to canvass the votes.