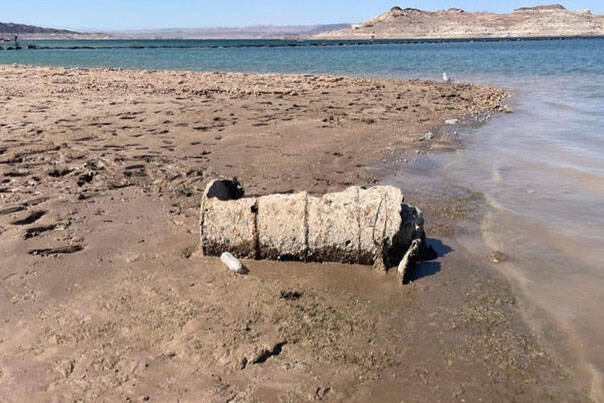 Shawna Hollister A barrel that contain human remains was found at Lake Mead on Sunday, May 1.

“We believe this is a homicide as a result of a gunshot wound,” said Lt. Ray Spencer of Las Vegas Metropolitan Police Department. “Detectives believe the victim was killed sometime in the mid ‘70s to early ‘80s, based on clothing and footwear the victim was found with.”

According to a press release from the Lake Mead National Recreation Public Affairs office, National Park Service rangers searched an area near Hemenway Harbor on the afternoon of Sunday, May 1, after a witness reported finding a barrel containing human remains. The police were then called to the scene.

Spencer said the first step in the investigation is to determine who the victim is, and unfortunately they have “no clue” who it could be.

Spencer said they will be looking at missing persons reports as well as running DNA tests. They will also be working with corrosion experts to help figure out a more specific timeframe of the crime.

Originally, the victim was thought to have been in the barrel since the 1980s, but Spencer said they had expanded the timeline because they found out the victim’s shoes were sold at Kmart and manufactured in the middle and late 1970s.

The find was only made possible by Lake Mead’s rapidly declining lake levels, and Spencer said it is possible the barrel was dumped in the lake from a boat.

Lake Mead reached its high-water mark in July 1983, at 1,225 feet above sea level. On Friday, the level was 1,055 feet — about 30 percent full. Some of the steepest cliffs bordering the lake show 170 feet of white mineral “bathtub ring.”

The barrel was seen by Shawna Hollister, who was boating on the lake.

“We were loading up the boat and a woman actually saw it first and screamed,” Hollister said in a message to a reporter. “So my husband went to check it out and he confirmed it was a body.”

Spencer said anyone who may have information about the crime to contact Metro’s homicide department at (702) 828-3521 or Homicide@lvmpd.com.

To remain anonymous, contact Crime Stoppers by phone at 702-385-5555, or at crimestoppersofnv.com.