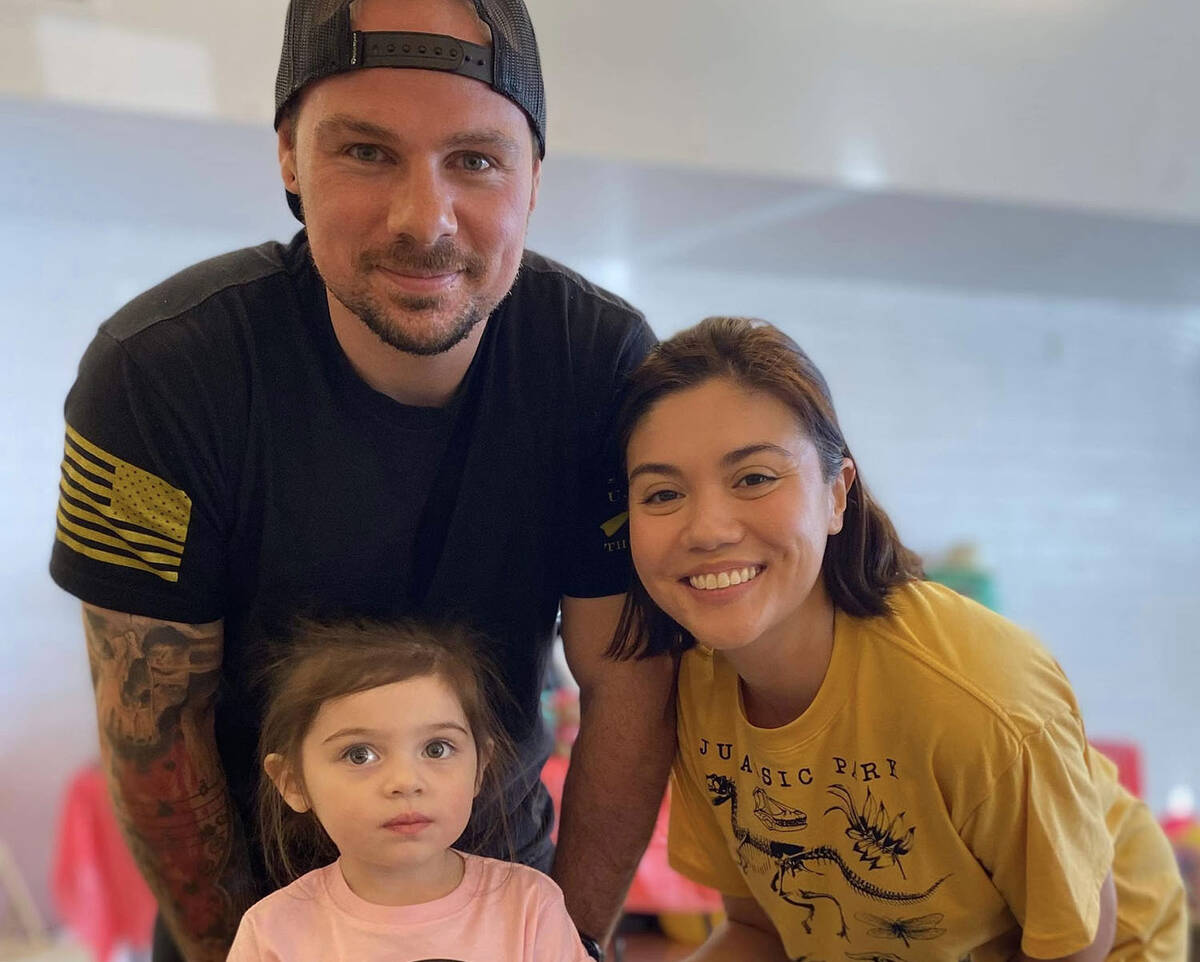 (Photo courtesy Eddie DiGangi) Eddie DiGangi, who was seriously hurt in the July 11 explosion at Armorock Polymer Concrete on U.S. Highway 95, is seen with his wife, Niki, and their daughter, Euly, in this family photo. 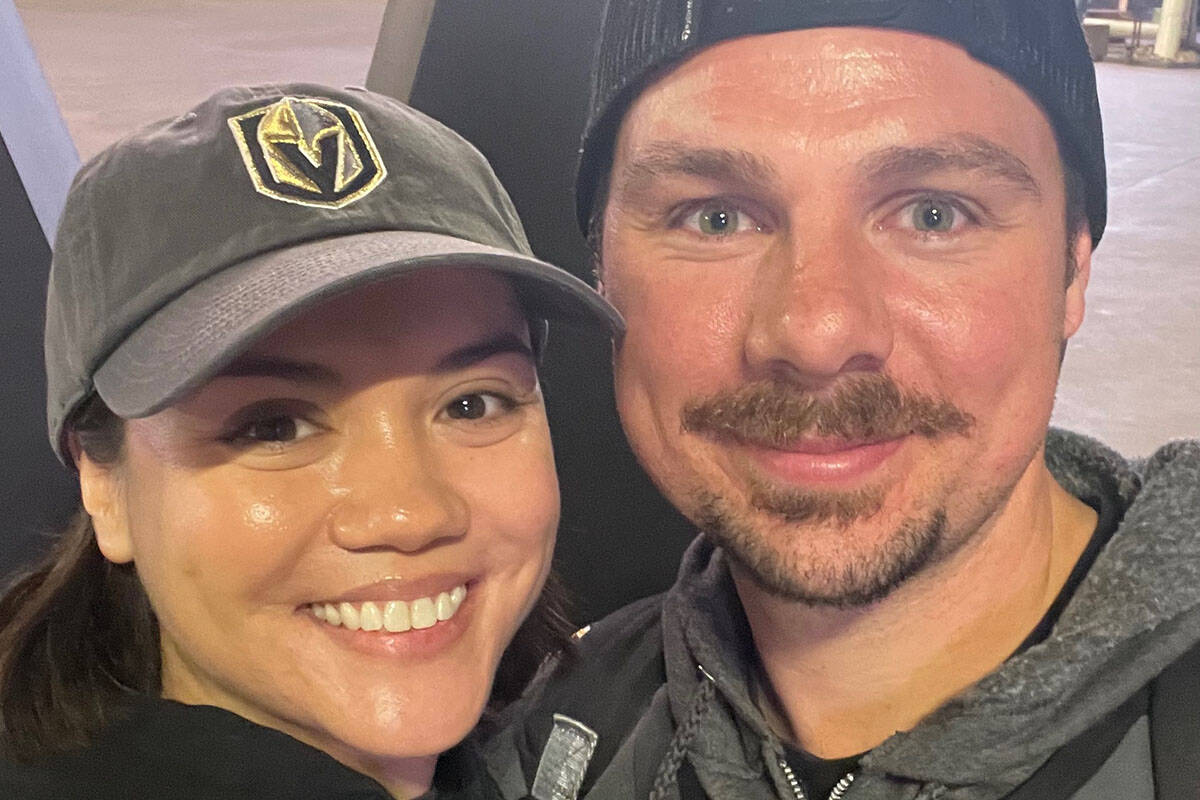 It was an ordinary Monday morning. Eddie DiGangi was at his station at Armorock Polymer Concrete where he worked as a machine operator. He had just spoken to his wife, Niki DiGangi, who also worked for the company, put in his noise-cancelling headphones and was starting to run his list of the pieces he needed to make that day.

His co-worker had brought him some chlorine for the pool at the home he and his wife had just moved into three weeks earlier.

Then, in less than a second and without any warning, it went “from normal to fire and chaos.”

“It felt like time stood still,” he said, recalling the blast that left him with first, second and third-degree burns on 12 percent of his body.

“I can’t explain the transition I felt,” he said Tuesday afternoon about the July 11 explosion at the manufacturing facility just outside the city limits on U.S. Highway 95.

“I felt a surge of energy from the blast and remember seeing fire. It was taking over,” he said.

DiGangi, 32, said he doesn’t recall exactly how it happened, whether he moved or if it was from the force of the blast, but he suddenly found himself about 10 feet back from his normal work position.

“My back was against an industrial dumpster. That’s when I came to.”

DiGangi said everything around him was on fire and he knew he had to get up.

“Then I realized I’m on fire. All at once I felt pain. It was almost an out-of-body experience.”

Recalling the “stop, drop and roll” lessons he learned as a child, DiGangi said he looked for a place to stop and drop but the fire was everywhere and there was no place he could drop.

He knew he needed to remove his shirt, which was on fire. He said he ripped it off and began trying to find a way out of the building.

“I was so confused and lost.”

But he did take a moment to look down and see his hands and arms, where the skin was “melting off.”

“It was the worst pain in my life.”

DiGangi said he was coherent enough to realize he needed to find some shade and water.

At the same time he was trying to get out of the building, Niki DiGangi heard the screaming. At first she didn’t know who it was, but she quickly realized it was her husband.

She did her best to help and ran into her office to grab a 5-gallon jug of cold water for her husband to drink and cool his skin. She said she didn’t even stop to consider how heavy it was.

With the help of his wife, a co-worker and instinct, DiGangi was able to get out of the danger zone and protect himself from the sun. He said they took shelter in a hut with a swamp cooler on the property.

It also gave him a moment to assess the situation and wonder how he survived.

According to DiGangi, the blast happened with him in the center of the explosion. All the floor panels around his work station, with the exception of the one he was standing on, were gone. The windows and doors were blown out and the ceiling had caved in, causing steel beams to fall to the ground.

“Everyone is trying to figure out how he is alive,” Niki DiGangi said. “He always says he is the unluckiest person, but he is very lucky.”

Once emergency personnel arrived on the scene, the next challenge was to get DiGangi out of the hut to the ambulance, which couldn’t get onto the plant’s property.

DiGangi said he recalls being helped by some men in red shirts who were at a nearby training facility. Somehow they obtained a covered cart or all-terrain vehicle and were able to transport him. He said one of the men removed his shirt, soaked it in water and put it over his head.

Eddie DiGangi was taken to University Medical Center’s trauma unit, where he stayed from about 10:30 a.m. July 11 to 8 p.m. July 14. He has to make daily treks to the hospital to get his bandages changed.

The other employee taken to the trauma center after the blast was released and back at work Friday, DiGangi said.

DiGangi realizes he has a long road to recovery. He cannot be in direct sunlight for at least six months and may be facing plastic surgery to repair the damage caused to his nose and ears. There’s also the possibility of needing skin grafts.

Most of his burns are on the right side of his body. He also lost half of his hair and half of his beard and suffered a punctured lip.

He said he is eagerly awaiting the day he can return to the golf course. DiGangi said he played at either Boulder Creek Golf Club or Boulder City Golf Course every Sunday.

Investigators are still trying to determine what caused the explosion, he said.

Neither of them know when or if they will return to their jobs at the plant, as many of their co-workers have already done.

Eddie DiGangi had only been working at Armorock since Oct. 4.

While he recovers, Niki DiGangi is at home to help provide around-the-clock care.

“They (her bosses at Armorock) understand I need to be here for him.”

For now, the two of them are focused on helping Eddie DiGangi recover from his injuries, taking care of their 3-year-old daughter, Euly, and getting their house in order.

Eddie DiGangi grew up in Boulder City and Niki DiGangi, a self-proclaimed “Navy brat” attended middle and high school here. The two met when they were 15.

The sense of community and outpouring of support since the explosion is exactly the reason why they chose to settle and raise their daughter here, they said.

“I am so appreciative and thankful,” Eddie DiGangi said. “It’s overwhelming.”

A GoFundMe account, https://bit.ly/3oheVHK, has been set up to help the family.

Eddie DiGangi’s mother, Lynne Dee DiGangi, wrote on the site: “As their family we are asking for any help to bring ease to Eddie and Niki during this road of recovery, so they can focus on what is most important. Any donations will be used directly for monthly household expenses.”