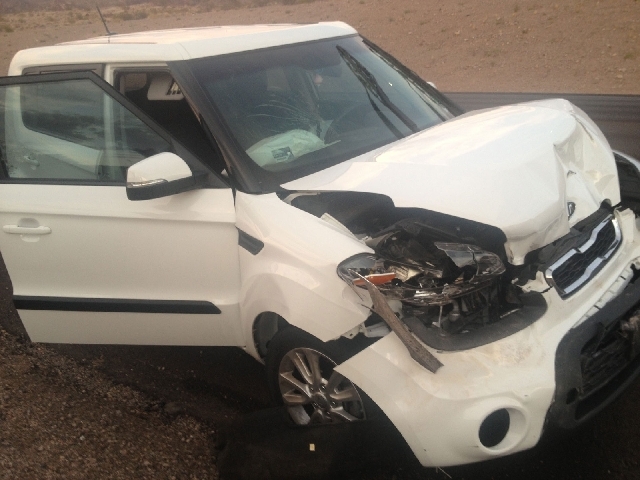 A young male bighorn was killed in a motor-vehicle accident about 7 p.m. July 18 on U.S. Highway 93 near Hemenway Valley.

Fortunately, these types of accidents don’t happen often on Nevada roads, according to state officials. However, there is no way of keeping track of each incident, either.

“There is no central reporting process for documenting such collisions and not all animal-vehicle collisions are reported,” said Doug Nielsen, conservation education supervisor for the Nevada Wildlife Department.

Ashley Turner was driving a four-door Kia Soul northbound on U.S. 93 from a Willow Beach kayaking trip when the bighorn darted out. Turner said she was going about 45-50 mph. She and passenger CJ Ochoa weren’t injured, but the vehicle was totaled.

“I didn’t see what was happening,” Ochoa said. “I just felt the air bag hit me in the chest. I turned around and saw that we hit the bighorn, and it stood up and walked to the side of the road where he died.”

“Thankfully, we were wearing our seat belts,” Turner said.

No citations were issued.

“Simply being involved in an animal-vehicle collision does not constitute a violation of the law,” Nielsen said. “Collisions often occur when an animal darts in front of the moving vehicle or even runs into the side of a vehicle while it’s moving down the road. The investigating officer determines whether a violation has occurred.

“If a person kills a bighorn sheep illegally, then state and game wardens will investigate the crime and file the appropriate charges,” Nielsen said.

He said there are a few ways to dispose of the carcass.

“In a remote location the animal’s carcass might simply be removed from the roadway, but in an area where there is a significant human activity, the carcass will be removed and disposed of,” he said. “However, there are instances when the department might use the carcass for educational purposes.”

A mature male bighorn was hit and killed near Railroad Pass Hotel nearly three years ago and the carcass was used for educational purposes.

“We chose to have the animal professionally preserved and it can now be seen in the lobby of our Las Vegas office,” Nielsen said. “On a regular basis, our educators are able to talk about the sheep and discuss the important role bighorns play in the environment and culture of Southern Nevada.”