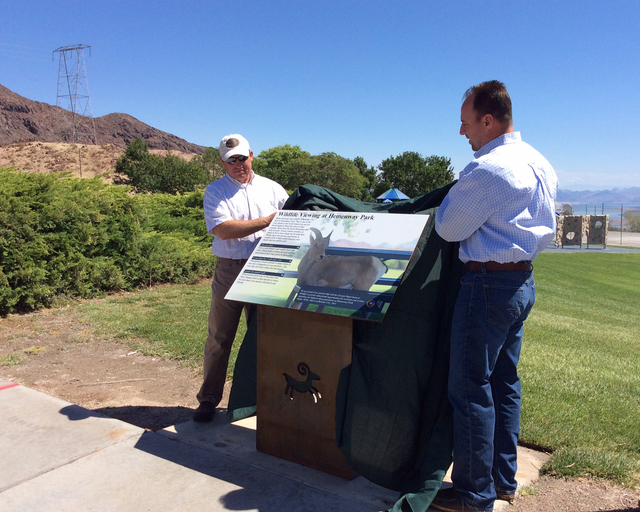 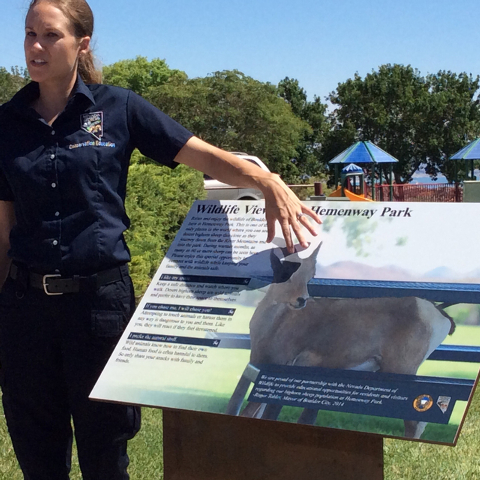 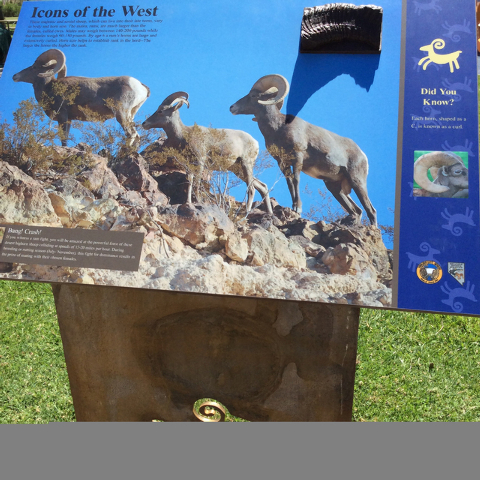 Bighorn sheep are no strangers to Hemenway Park as they casually leap down the mountain and nibble the morning grass while spectators stand in awe and snap their pictures.

For Nevada’s state animal, Hemenway Park is a place to bask in the shade under the tall trees and feed on the vegetation it has to offer. And for some visitors, the bighorn sheep are the main reason they come to Boulder City.

Because of the prominent impact the bighorn sheep have made on the Silver State, the Nevada Department of Wildlife and Boulder City teamed up to create six informative panels that educate the public on a species that has trotted its way into the heart of Nevada’s landscape.

In 1967, there were fewer than 3,000 bighorn sheep throughout Nevada, according to Nielsen. But thanks to the River Mountain sheep, the ones who frequent Hemenway Park, the total number of sheep statewide has increased to more than 11,000.

Parks and Recreation Director Roger Hall said they noticed sheep making their way to the park about six months after it opened in 1984.

“We found over the years that the sheep kept the grass mowed very well and helped fertilize the grass on a daily basis,” he joked. “We also noticed that the public was very interested in observing them.”

Hall said his office still receives calls inquiring about when the sheep will make their way down from the mountain to Hemenway Park.

“We have three to four big buses per day of visitors that stop here just to look at the sheep. I would say this is the No. 1 visited park in Boulder City,” he said.

The panels, which are approximately 3 feet long, feature upclose visuals that will hopefully engage the public to want to learn more about them, according to designer Jennifer Waithman of NDOW.

The panels include fun facts about the bighorn sheep, with some featuring a piece of a horn or a hoof track, to give visitors a better understanding of their biology and why the sheep come down the hot mountain to the cool shade in the park.

Nielsen said they wanted the panels to discuss sheep biology, conservation efforts, the historic role the sheep have played in the Mohave Desert, their new role in Boulder City, and how they’ve impacted those who come to visit from around the world.

According to NDOW Director Tony Wasley, Nevada has more bighorn sheep than any other state in the continental U.S. Alaska is the only state to have more, and roughly one-third of all desert bighorn sheep throughout Nevada can trace their origins back to the River Mountains.

Mayor Roger Tobler, who was on hand to help unveil the panels, credited the bighorn sheep as an asset that separates Boulder City from the rest of Southern Nevada.

“A lot of people know that we don’t have the gaming and some of these things. We’re a small community in an area that really grew out very quickly,” he said. “People are much more willing to accept conservation costs when they can see and appreciate the animal. And that’s the biggest benefit of what NDOW has done with these reading boards.”

Wasley thanked Boulder City for its efforts in helping with the panels as NDOW had been wanting to do a project such as this for years. But after roughly a year of working on the panels, visitors can finally grasp a true understanding of why the bighorn sheep are important to Nevada, and especially Boulder City.

“It’s an animal that could in many cases be considered a nuisance, but it’s embraced and given value,” Wasley said about Boulder City’s love for the bighorn sheep. “I believe many thousands of visitors will leave Hemenway Park with a better understanding of not only sheep and their value and importance, but of wildlife on a much larger scale.”