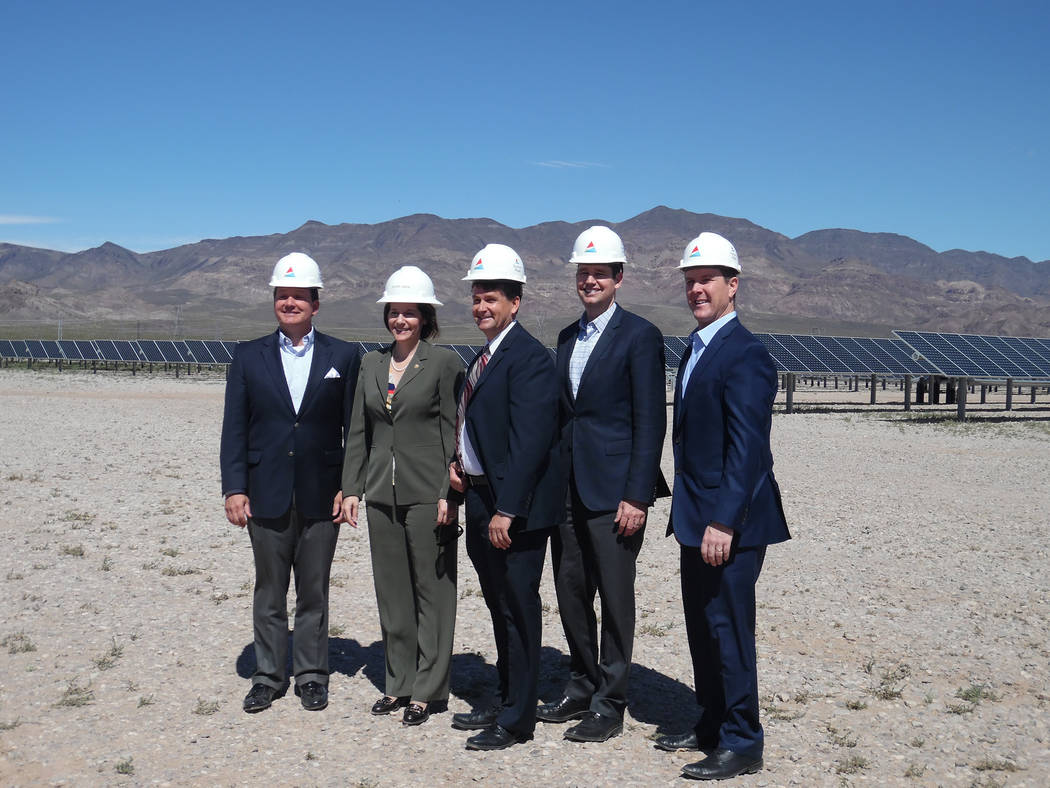 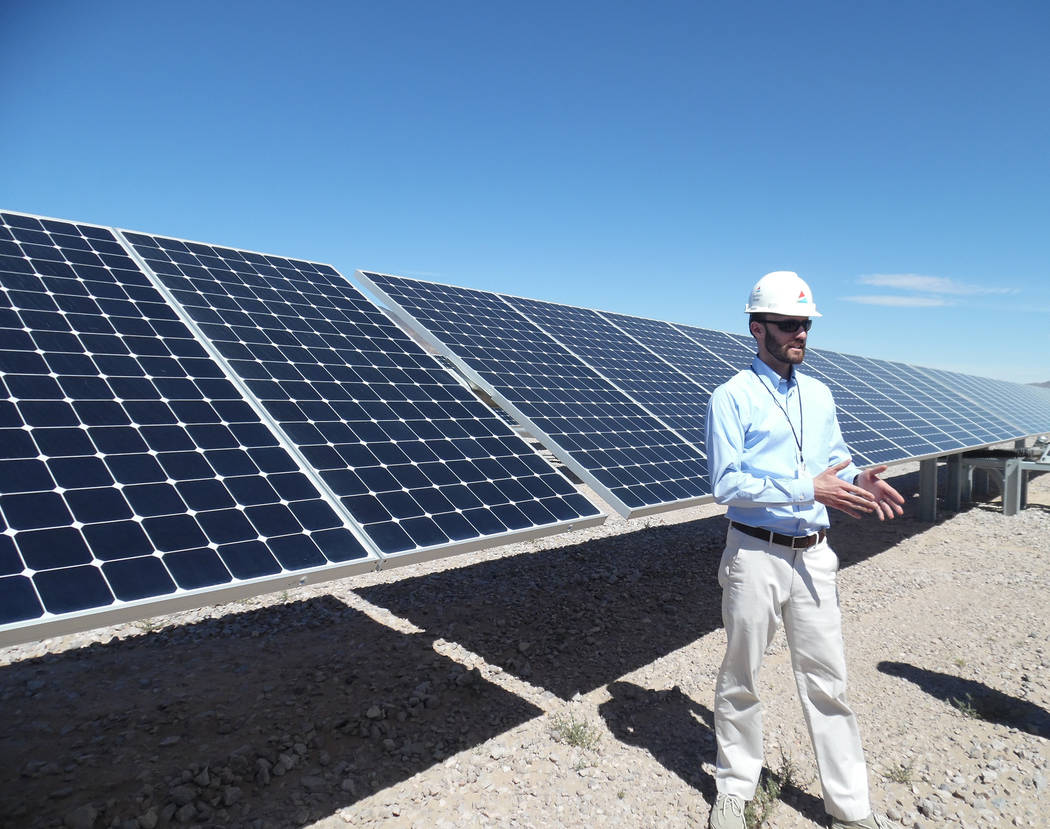 Hali Bernstein Saylor/Boulder City Review Andew deRussy, an engineer with Southern Power's engineering and maintenance team, explains how energy is generated on each module on the solar panel during a tour of the new Boulder Solar I facilty in the Eldorado Valley on Tuesday. 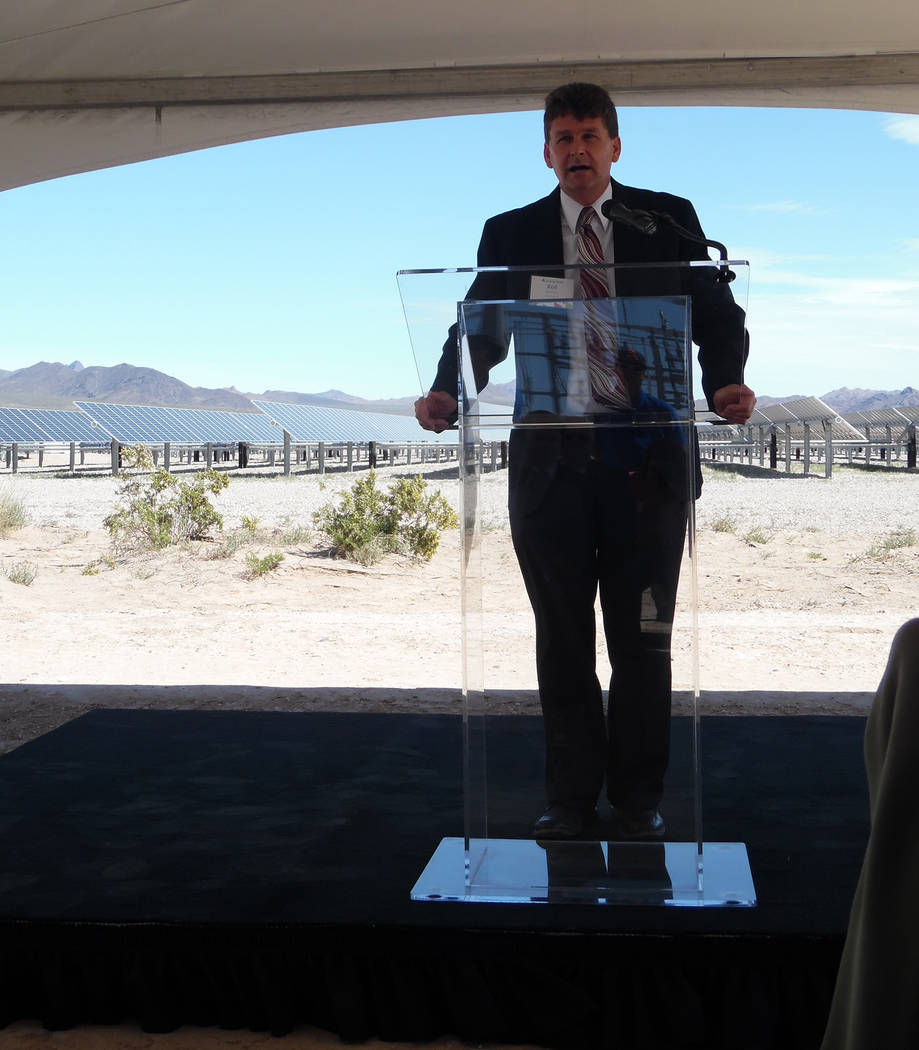 Hali Bernstein Saylor/Boulder City Review Boulder City Mayor Rod Woodbury spoke about the impact the solar industry has on the city during the dedication of the Boulder Solar I facility on Tuesday.

As the temperature rose into the mid-80s with a nearly cloudless blue sky, the newest solar facility in the Eldorado Valley was dedicated Tuesday morning.

The perfect solar-power generating weather was a prime example why SunPower chose the location for the Boulder Solar I facility.

The 100-megawatt facility will produce enough energy to power 30,000 homes, said Bob Schaffeld, senior vice president of Southern Power, which obtained controlling interest of the plant from SunPower in November.

SunPower, which built the facility and manufactured the components used to build the 288,000 tracker-mounted panels, remains a partner in the project and will maintain and operate the power plant. NV Energy will purchase the power generated at the 542-acre site.

It is Southern Power’s third project in the state, with the others near Apex and one near Nellis Air Force Base.

“Boulder City has been leading the charge with solar (power) for many, many years and it’s exciting to see what you have done here in Boulder City.”

She said she spent many hours of her childhood hiking, camping and “appreciating the great outdoors.”

“… That is one of the reasons why I truly believe that going down the path of promoting clean, affordable renewable energy benefits us. We have sun here; we can lead the country with solar, renewable energy, clean energy. It’s an exciting time here in Nevada,” Cortez Masto said.

As a member of the Senate’s Committee on Energy and Natural Resources, she said renewable energy is one of her primary focuses.

“I have made it a priority that to ensure that on that committee that I am doing everything I can to promote solar in Nevada and across this country,” she added.

Mayor Rod Woodbury said Boulder Solar I, like the other solar facilities in the Eldorado Valley, directly benefits the city and its residents by providing jobs, a buffer from massive residential development and generating revenue.

“The economic impact on the state filters out in unseen ways on Boulder City, the Las Vegas Valley and the state as a whole,” he said.

Leases for the land the solar facilities are built on generate about $10 million annually for the city.

The newest power plant is one of several located on 5,000 acres in the Eldorado Valley that generate about 1,100 megawatts of electricity, Woodbury added.

All of the energy generated at the power plant is being purchased by NV Energy, which is helping the city of Las Vegas achieve its goal of operating all of its government-run facilities on renewable energy, said Pat Egan, senior vice president for NV Energy.

Boulder Solar I By the Numbers