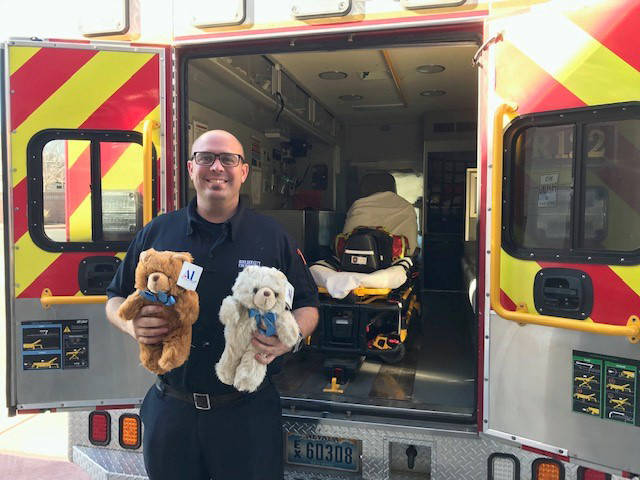 Boulder City Fire Department Boulder City firefighter Brian Shea holds teddy bears that are given to children to help them stay calm and lessen the trauma when they are involved in accidents and disasters.

The stuffed animals are part of the Trauma Teddy Bear program, recently restarted by Deputy Fire Chief Greg Chesser. Its purpose is to help children going through trauma and disasters. Teddy bears are kept on rescue vehicles and given out to children to calm them and to help them communicate with emergency personnel.

“One was a 4-year-old and one was just over a year old,” Chesser said. “It (the teddy bear) really helped with the younger one.”

Chesser said right after he implemented the program, the department was called to the home of those two children. He said they were scared and having a hard time, so the crew gave them each a bear and they calmed down right away.

“The teddy bear program is designed to bring a little comfort to people, especially young kids, during a traumatic event,” said Fire Chief Will Gray. “Our hope is to bring them a little comfort.”

Chesser said he was familiar with the program but had never been in a department with one. When he started working for the city last year, he said he looked for ways to reduce community risk and thought this would be a good one. He said the department had a couple of teddy bears in storage because the program had been used before, but a past administration decided to end it.

Since then, Chesser said the community has embraced the program.

“Within two days of announcing it, we had a box (of teddy bears) sent to us,” he said.

Chesser said the program is ultimately just one way he and the department are working to reduce risks for the community.

The program, through actions and services, aims to prevent the loss of life, property and resources that can occur in a community.

“We are developing programs that can reduce the risks to life and property within our community,” said Gray. “These programs include community first aid and CPR classes, fire prevention and public education, and smoke detector installations. Some of these programs had existed in the past and are being brought back with an added emphasis on the identified risks with Boulder City.”

“I think the best part of it … is it’s meant to reduce risk, but it also allows us to get deeper into annual data and specific types of calls,” Chesser added.

He said he is looking to start community CPR and first aid training in May. He said he is also working on starting a child seat safety program in April and creating a safety seminar to present to retirement homes for geriatric safety and independence later in the year.

Donations of new teddy bears for the trauma program are accepted year-round at the fire department.