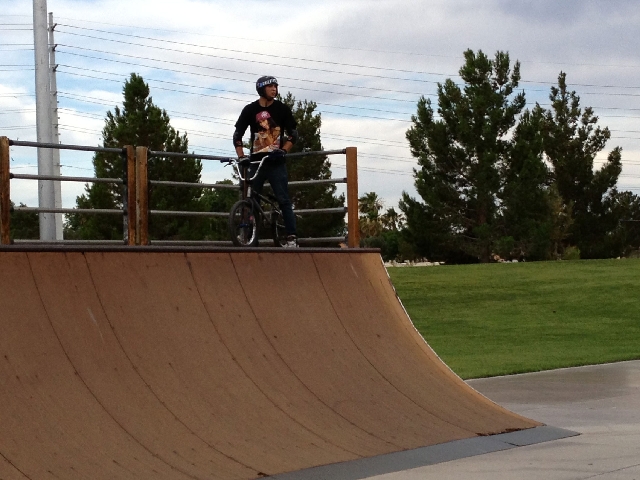 Michale Wilborn stands next to the spectator’s bleachers at Boulder City’s BMX Veterans Memorial Park on Sunday. An hour before the annual Olympic Day is scheduled to start at 5:30 p.m., Wilborn looks at the track that is about to be filled with BMX riders of all ages as she contemplates what else must be done before the event begins.

She makes her way toward a couple of teenage girls who are lending her a hand and lets them know where she wants certain posters around the track.

Wilborn wants everything to be perfect for a day that is dedicated worldwide to promoting fitness and exercise, and to simply get out and be active.

“We have over 350 tracks in the United States, as well as Canada and Puerto Rico. Everybody around the world is doing it,” said Wilborn. “No one has to go out and pay for a membership today. It is free to race and to ride.”

This nonprofit track that is city owned and prides itself as being “The Best Track by a Dam Site” is run by Wilborn and other volunteers who enjoy working and giving back to the kids.

“We do it for them,” said Wilborn proudly.

One kid who has most famously used the track to help launch his BMX career is 20-year-old USA Olympic bicycle motocross racer Connor Fields, who is ranked second in the world according to the Union Cyclist Internationale.

Fields, who graduated from Green Valley High School in 2011 and still lives in Henderson, began utilizing Boulder City BMX at 7 years old to help develop his skills, and make him the rider that he is today.

“It feels good to watch his growth as a rider,” Wilborn said. “We still know him as little Connor here, and now he’s 20 years old. It is amazing.”

Fields was stuck in Illinois and could not be at this Olympic Day because of scheduling conflictions, but Fields remembers to always come around and give back to the track that has given him so much over the years.

“He’ll come and do clinics, and he’s so good with the kids,” Wilborn said. “There’s a list we’ll say, ‘Connor Fields is going have a clinic,’ and it only takes 15 riders, it fills up like that.”

As the event is drawing closer to the start, 19-year-old BMX rider Keegan Flannigan begins warming up on the track.

Flannigan, who has been riding for seven years, says Boulder City BMX is a good way to keep kids in the area active.

“It keeps us out of trouble, and gives us something to do,” said Flannigan. “Especially in Boulder City, where there is not much to do, this is a great place to be.”

Boulder City BMX was used as the qualifying track for the 2008 Beijing Olympics and was the host for the 2010-2011 West Coast Redline Championship.

It is open every day, with practices starting at 6 p.m.