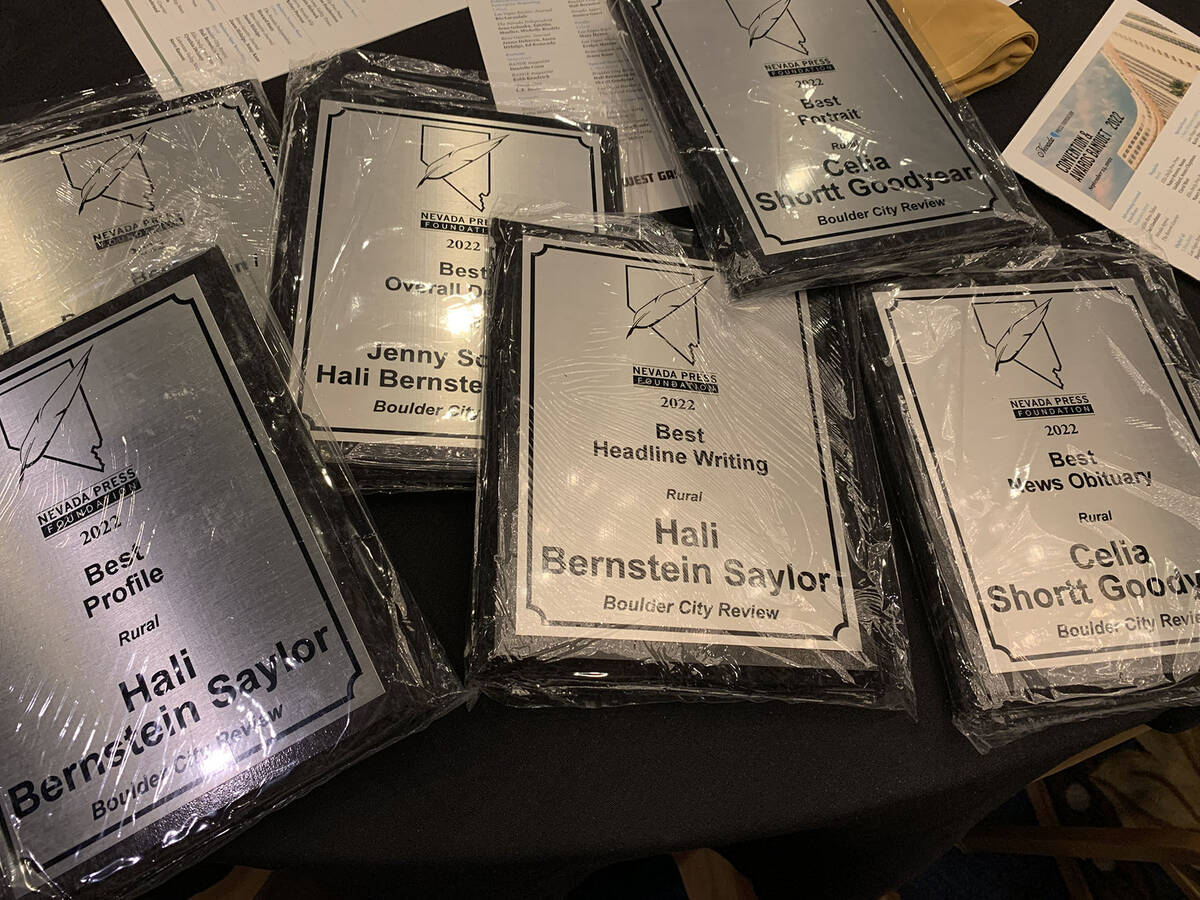 “I am proud of the work these awards represent,” said Editor Hali Bernstein Saylor. “We work diligently to provide readers of the Boulder City Review important, timely and interesting stories about the news, events and people of our community. These honors, while nice to receive, are just icing on the cake.”

Bernstein Saylor received first-place awards in the profile and headline writing categories. She also shared the first-place award for overall design of the paper and page one design with Jenny Scheid.

It is the sixth consecutive year the paper has taken the top design honor. Judges commented on the paper’s “clean pages, great design, nice use of art.”

Bernstein Saylor’s award-winning profile was about Boulder City resident Art Manteris, who retired in June after more than 40 years in the sports betting industry.

The judges said “The reporter deftly intertwined contemporary information with anecdotes and historical context to give readers a full picture of the subject and why his retirement is newsworthy. Few wasted sentences or extraneous details.”

“Clever headlines for often routine stories,” the judges wrote about her work. “Hali Bernstein Saylor has a knack for using clever phrasing to draw readers into the story. I can’t wait for a library feature so I can steal the ‘Book ‘em’ headline …”

The judges said she had “great quotes and heartfelt moments that showed what the band teacher did for the community as well as the impact he had on the lives of the children he taught.”

She also received a first-place award for her portrait of the owners of Sweet Spot Home Decor.

“Being recognized by the Nevada Press Association is always an honor. This year, it’s even more so for me. I started my time in Boulder City with my first two first-place awards ever, and I earned these two at the end. They are the perfect bookends to my 5 ½ years working at the Boulder City Review,” said Shortt Goodyear, who traveled from Wyoming to attend the awards banquet.

Bernstein Saylor received second-place awards for her profile of Boulder City resident John L. Smith, who has written several history books about those who helped shape the Silver State, and for her business spot news story about Railroad Pass Casino breaking ground for a new hotel tower.

Shortt Goodyear received a second-place award for her news photo of the first day of school.

Together, they received a second-place award for the special section they worked on to commemorate the 20th anniversary of 9/11.

Third-place awards were for Bernstein Saylor’s portrait of a trio of special effects artists and haunted house scarers at Tom Devlin’s Monster Museum and for Bernstein Saylor and Shortt Goodyear’s photo gallery of holiday activities in Boulder City.

The rural division includes all news organizations that serve rural areas, regardless of their size or frequency of publication. The awards, presented annually, recognized work produced between April 1, 2021, and March 31.

Members of the Arizona Newspapers Association judged this year’s contest.