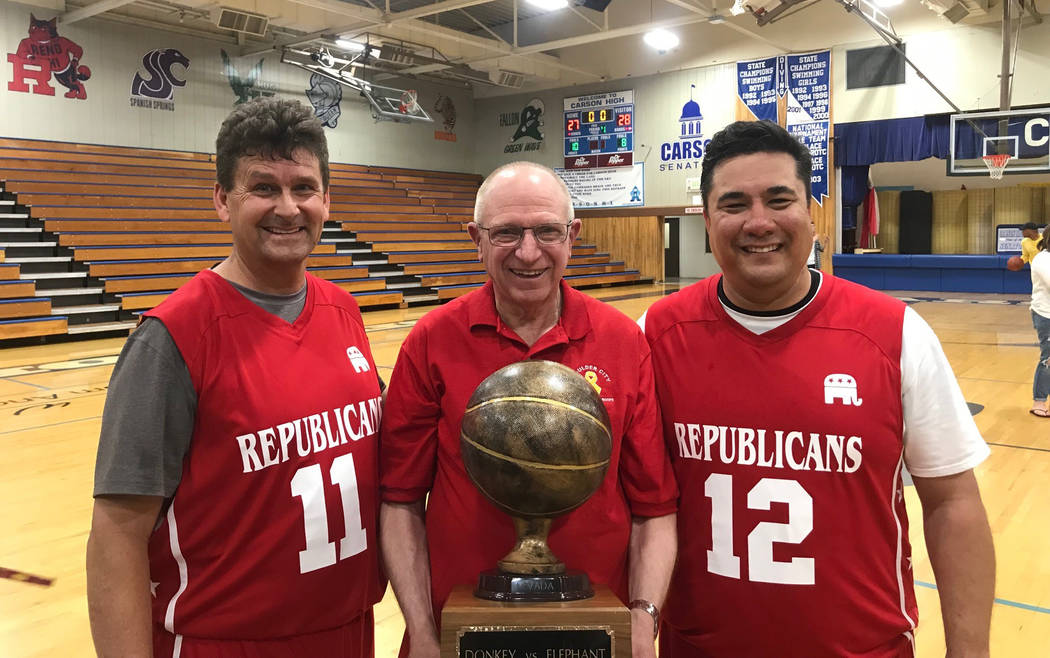 (Blayne Osborn) Mayor Rod Woodbury, from left, Sen. Dr. Joe Hardy and Assemblyman Glen Leavitt, all of Boulder City, helped represent the Republican Legislature on May 2 during the biennial Elephant vs. Donkey basketball game in Carson City, Nevada. The Republicans defeated the Democrats 28-27.

Boulder City Mayor Rod Woodbury scored the winning basket as time expired helping the Republicans defeat the Democrats 28-27 in the biennial Elephant vs. Donkey basketball game in Carson City on May 2.

The Republicans were led in scoring by Sen. Scott Hammond of Las Vegas, who poured in 21 of his team’s 28 points.

It was a back-and-forth affair in the final quarter as a lot of the closing minutes were spent at the foul line. With 54 seconds left, Hammond was fouled and hit both free throws to cut the Democrats’ lead to 25-24.

“Clock management was really the key down the stretch,” said Sen. Joe Hardy of Boulder City, who served as the Republican team’s coach. “We had a few fouls to give in order to put the Democrats into the one-and-one. That allowed us to aggressively pressure the Democrats and attempt to force a turnover.”

The strategy worked as the Democrats missed the front end of their one-and-one free-throw attempt, but Republicans lost the rebound. With 13 seconds remaining, Hammond stole the Democrats’ attempted inbound pass and was fouled. He made one of two free throws to cut the Democrats’ lead to 27-26.

The Democrats avoided the backcourt pressure after Hammond sunk his second free throw, but the Republicans managed to trap the Democrats in the frontcourt and forced a turnover with 8 seconds left.

Hardy called a timeout to set up a play that most believed would run through Hammond. Assemblyman Glen Leavitt of Boulder City navigated the inbound pass, hitting in stride point guard Woodbury. Woodbury proceeded to juke a Democrat defender just inside of the half-court line.

Woodbury then looked to hit Hammond, who had curled around a double screen in the left corner of the court. The Democratic defenders fought through the screen, and there was no passing lane open for Woodbury to find Hammond.

“I knew I couldn’t force the pass to Hammond through two defenders, so I cut right into the lane to see if I could find another open teammate or potentially draw a foul. Much to my surprise, no other Democrat defenders left their man to shut off the driving lane. I caught a glimpse of the clock and knew there were four seconds left.”

Woodbury sliced down the lane and rose toward the basket, releasing the game-winning finger roll with 1.5 seconds left on the clock.

“I’m glad we could continue this legislative tradition,” said Republican Assemblywoman Melissa Hardy of Henderson. “It is great to be able to have the proceeds from the game go to such a great charity like Seniors in Service, which sponsors the Foster Grandparents and Senior Companion programs.”