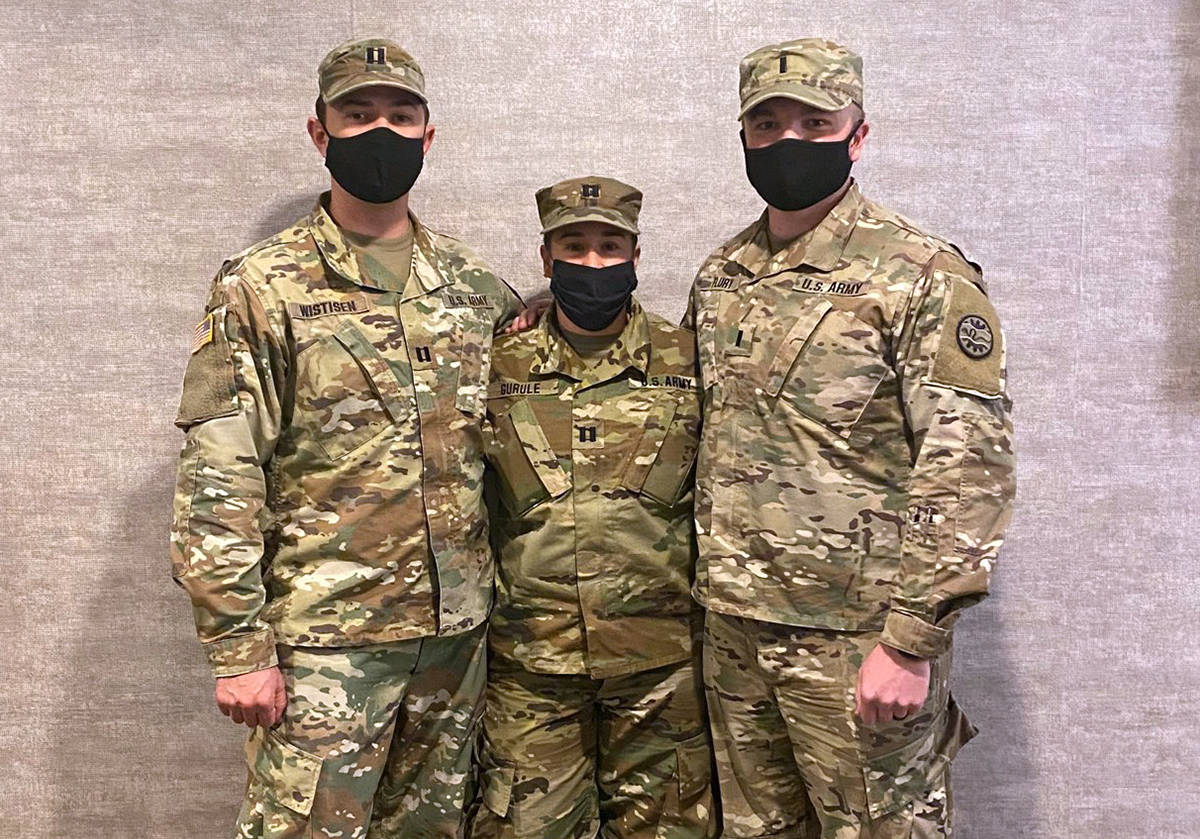 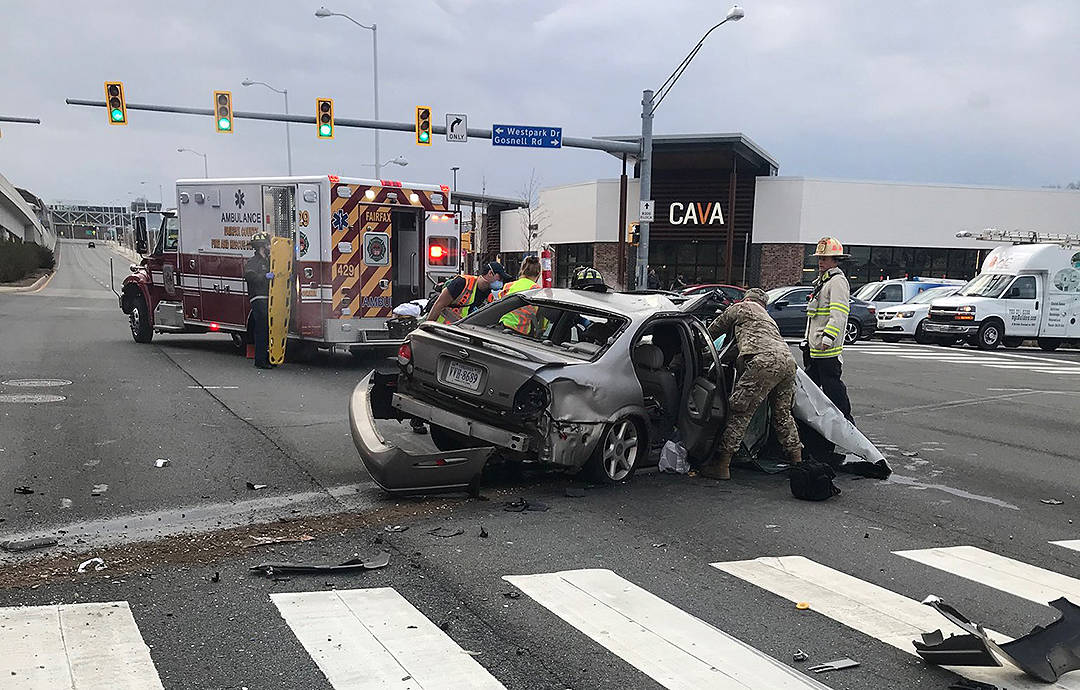 Nevada National Guard U.S. Army 1st Lt. Michael Flury helps secure an accident victim Jan. 18 in Tysons, Virginia. He was there with Capt. Tana Gurule of Boulder City and Capt. Tyler Wistisen during an assignment in the Washington, D.C., area to help with the Jan. 20 inauguration.

Last week, U.S. Army Capt. Tana Gurule was in the Washington, D.C., area with the 1-221st Cavalry to help with the inauguration of President Joe Biden. On the morning of Jan. 18, Gurule said she was getting maps made in Tysons, Virginia, and picking up coffee for some soldiers in her unit.

After picking up the coffee, she and her colleague, Capt. Tyler Wistisen, got into their cars to drive back.

“Me and my colleague pulled out of a parking lot … . I just saw a car speed by and hit a wall,” she said. “It sounded like an explosion. I jumped out of my car and he jumped out of his.”

She said the car had hit the wall so hard it spun around and was in the opposite direction of traffic.

They immediately ran to the wrecked vehicle to see if anyone needed help.

“We couldn’t get any of the doors open,” she said. “She (the driver) wasn’t wearing a seat belt. The only thing I could reach was her wrist and there wasn’t a pulse.”

Gurule said they then pulled off the windshield so she could get to the driver.

“I checked her carotid (artery) and she had a pulse,” said Gurule. “I opened her airway and she started breathing right away. I held her airway open and talked to her until they (the paramedics) got there.”

The victim, whose name was not released, was in critical condition for the first 24 hours, but after that time she was OK, according to Gurule.

After giving law enforcement their statements, Gurule said she and her colleagues went back to work, getting ready for the inauguration.

“I literally just happened to be in the right place at the right time,” she said.

This wasn’t the first time that happened to Gurule.

For her day job, Gurule works as a Metropolitan Police Department officer in Las Vegas, where she received emergency medical technician training. In 2017, she was honored by former President Donald Trump for her life-saving efforts during the Oct. 1 mass shooting at the Route 91 Harvest Festival.

She was off duty and attending the concert but when the shooting started she put on a yellow safety vest and began evacuating victims.

She credits her brother, who died in 2013, with getting her through during these two events, as well as others.

“Sometimes I feel that he puts me in the right place at the right time,” she said. “It’s a weird feeling. … I felt very calm and knew what I had to do. I tried to keep everyone calm.”

Gurule has lived in Boulder City for about five years. She has been a Metro police officer since 2015 and in the U.S. Army since 2013.

For the inauguration, her unit was tasked with protecting and securing the high-risk infrastructure and downtown areas.

Gurule was one of about 250 Nevada National Guard soldiers and airmen supporting the presidential inauguration.

According to the National Guard Bureau, about 25,000 National Guard soldiers and airmen were approved by the Defense Department to conduct law enforcement and security precaution missions in support of federal and District of Columbia agencies for inauguration.