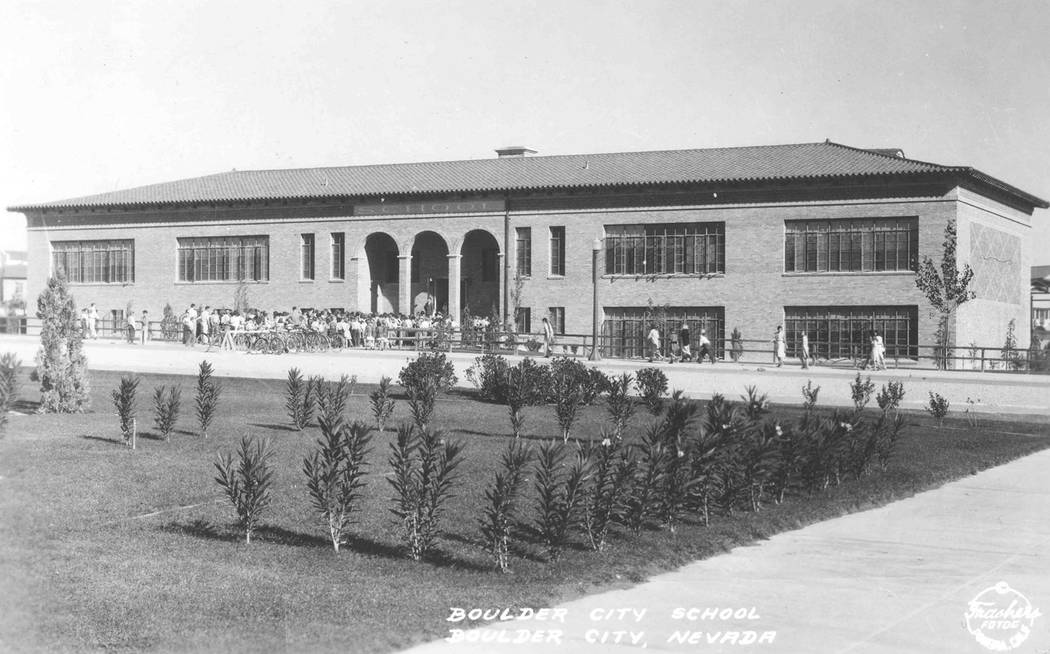 (Boulder City) Boulder City Elementary School at 401 California Ave. was built in 1932 by the Bureau of Reclamation and operated with Six Companies funds. Today, the building serves as City Hall. The building has distinctive brick patterns along the front and end walls and a red clay tile roof. 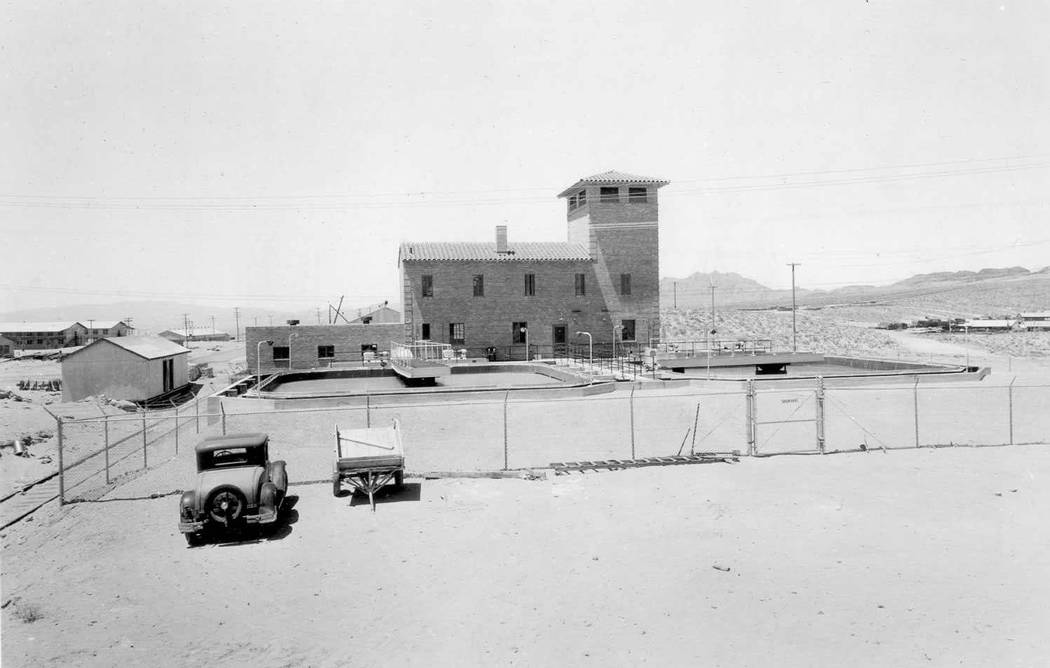 (Boulder City) The original water treatment filtration plant was built in 1932 at 300 Railroad Ave. to provide the first pure, potable water for Boulder City residents. It was used until 1982. 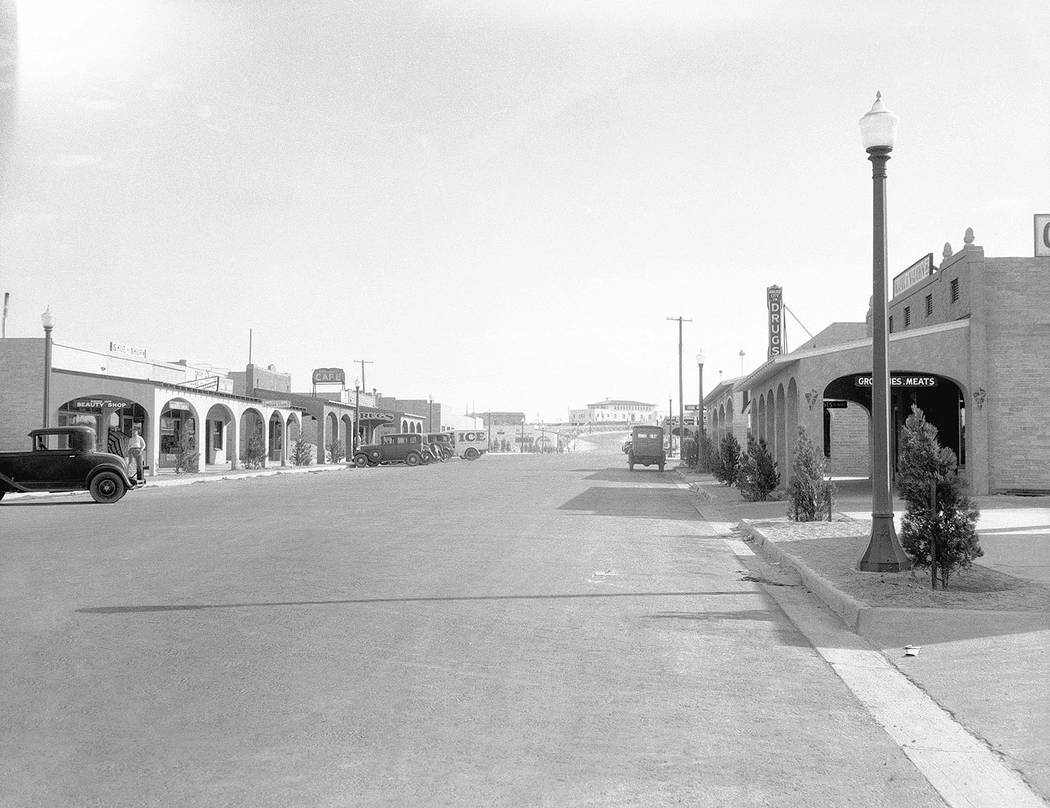 (File) Nevada Way, once known as Main Street, is seen in this picture taken Aug. 24, 1932. The model construction housing center for the workers on the huge Hoover Dam project, the city was constructed at a cost of $2 million.

As Boulder City residents prepare to mark the 60th anniversary of the town’s incorporation, we offer a brief look at how it happened. The following is an excerpt from Dennis McBride’s book “In the Beginning … A History of Boulder City,” published in 1992. McBride is an author, a historian and the director of the Nevada State Museum in Las Vegas.

“The story of Boulder City’s incorporation has never been told and can’t be told in detail here. A lot of myths have grown up about it in the last thirty years: the popular notion about Boulder’s incorporation is that Boulderites, wanting their freedom from Uncle Sam, rose together and fought for their independence.

“In fact, the incorporation of Boulder City from the very beginning was motivated by money and special interest. Most Boulderites never wanted incorporation and fought it right into the halls of Congress. Incorporation took nearly twenty years and brought out the worst in nearly everyone: neighbors and friends on opposite sides of the question became enemies and ill will persists even today, thirty-two years after the government turned Boulder City loose.

“The government’s original intent was to give up control of Boulder City as soon as Hoover Dam was finished, but Boulder City businessmen knew they had a good thing and fought release.

As Ray Lyman Wilbur Jr. wrote in 1935, “All these businessmen are very anxious that the government keep control of the city. They realize that their success is particularly due to the protection offered by the government both from too much competition and in law and order … They fully foresee that if Boulder City became a municipality under the laws of Nevada, it will open the town to the gambler, prostitute, and vice in general. Las Vegas is a shining example to them of what Boulder City could become.”

“Pressure from these businessmen to protect themselves from competition and pressure from Boulder citizens who were genuinely afraid of vice coming to town kept Boulder under federal control throughout the rest of the 1930s, while World War II kept the city under control through most of the 1940s.

“By the end of the war, however, it was clear to many that federal control had become more a hindrance than a help. Businessmen realized they were missing out on the postwar boom because the government restricted growth so tightly and they couldn’t earn as much money. They began agitating for incorporation.

“Since 1936 Boulder City had become a tremendous financial drain on the Bureau of Reclamation which found itself paying for street maintenance, school programs, and administration of a city which had long ago ceased being a worker’s camp for Hoover Dam. The California power companies who operated the dam had to pay for Boulder City maintenance out of the profits they earned from sale of Hoover Dam power, and they felt that if the government couldn’t run Boulder City at a profit, then they should be allowed to take over and run the place profitably or else liquidate it. Where before the war there was pressure to keep Boulder City under federal control, now there was even more pressure to let it go.

“Caught in the middle were Boulder citizens who had no voice, and who feared their insulated lives were about to end.

“The government was determined to let go and throughout the 1940s conducted several studies into how Boulder City could be untangled from federal control and become an incorporated city with some means of supporting itself. The most important of these studies, the Wright Report released in 1946, formed the basis for the first bill introduced in Congress to separate Boulder City from the government. Introduced by Nevada Representative Berkeley Bunker on July 10, 1946, the bill died in committee. Nevertheless, it was the first definite step toward Boulder’s release.

“In 1949 the Bureau of Reclamation hired Dr. Henry J. Reining, a professor of public administration and political science at USC, to conduct public hearings in Boulder City about incorporation and to produce a report providing a blueprint for removing federal control in town. The first hearing, held in the Boulder Theatre on November 19, 1949, was poorly attended. But other hearings in November and December filled up, were loud and rambunctious. It was the first time since 1931 that Boulderites were allowed to say anything about what was going to happen to them and they weren’t about to miss the chance.

“The Reining Report was released on June 15, 1950, and suggested a slow, careful process of separation from federal control before incorporation. But the government could hardly wait and on July 27, 1951, Interior Secretary Oscar Chapman issued Department of Interior Order No. 2650 separating Boulder City from the Boulder Canyon Project.

“That order hit the town like a bombshell and opened a decade-long war between pro- and anti-incorporationists. On November 3, 1951, Boulder held its first election to pick members of an Advisory Council which would act as a city council until after incorporation.

“There was real hatred in Boulder City during those years. Pro- and anti-incorporationist candidates for the Advisory Council smeared and undercut one another. Preachers fought incorporation from their pulpits while the pro-incorporationist editor of the Boulder City News and the Chamber of Commerce, eager to expand business in town, had a public voice citizens did not. Meanwhile, hovering around Boulder City like vultures were individuals and corporations from out of town trying to finagle government leases on huge tracts of land on which they could speculate once incorporation made it theirs. Congressional subcommittees held hearings in Boulder in 1953 and 1955, and various versions of a Boulder City Bill were regularly introduced and killed in Congress. Representatives from both sides lobbied in Washington.

“The more citizens fought incorporation, the further the government cut the city’s operating budget. No separation, no money. No money, no city.

“The pro-incorporationists won. On August 19, 1958, Congress passed the Boulder City Act and President Eisenhower signed it on September 2. On December 1, 1958, a charter committee was elected to write a city charter which was approved in election on September 29, 1959.

“On January 4, 1960, incorporation ceremonies were held at which the government and the new city officials signed quitclaim deeds for all of Boulder’s land, property, and infrastructure, and the Bureau of Reclamation gave the town 33 square miles of surrounding desert.

“When the last of these deeds was signed, Boulder City faced its future.”