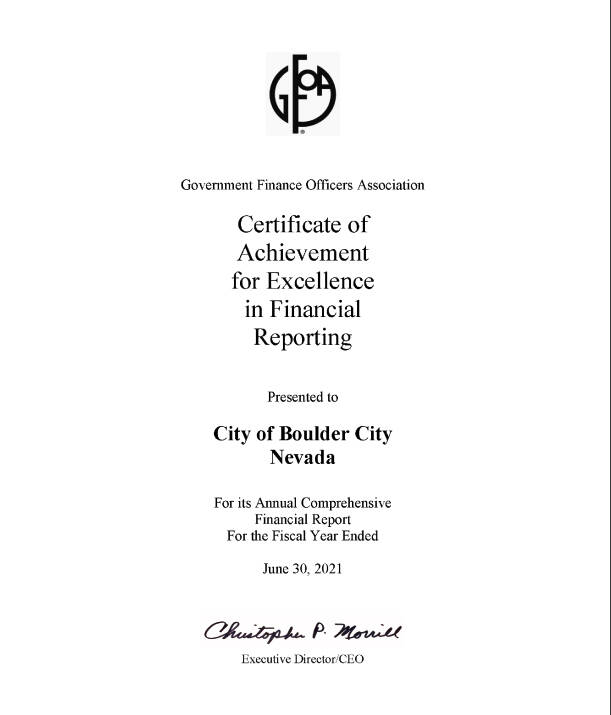 City Manager Taylour Tedder said the finance department has done a wonderful job and highlighted its recent triple crown award win from the Government Finance Officers Association. Only 317 governments out of 21,000 were recognized.

“We are one of 317 governments in the nation and I have faith in what they are doing,” Tedder said.

Longtime Boulder City resident Marty Rihel voiced his concern about continuing on with the firm.

“HintonBurdick has been the auditor for the city for the past several years and I do believe it’s time to change and go out and look for another auditing company,” he said.

Resident Fred Voltz phoned in to comment on inaccuracies and omissions he found in the report relating to lack of segmentation between capital and operating utility department funds, HintonBurdick ignoring the two municipal golf courses and their need to be placed into a new proprietary fund and deficiencies in internal control.

“The audit review committee needs to publicly ask questions of those responsible for the incomplete and inaccurate work product outlined in the issues raised above,” Voltz said.

HintonBurdick CPA Chad Atkinson, along with director Ashley Atkinson, reviewed the packet with the committee via video call.

“We are earlier than we’ve ever been with the audit,” Chad Atkinson said. “The capital improvement fund balance is up $2 million from the previous year.”

This fund accumulates resources related to the sale or leasing of Boulder City land. The proceeds are used for Boulder City improvement projects.

The audit found that the general fund budget has decreased $203,000 from the previous year.

Councilwoman Claudia Bridges asked why there was a difference between leases receivable and deferred amounts related to leases.

“We are capturing all time periods in the leases receivable,” Chad Atkinson said. “As the new year comes on, then that deferred revenue will be moved into revenue as it applies to that fiscal year.”

Audit Review Committee member Judy Dechaine asked where the $21.7 million from the American Rescue Plan Act was accounted for in the report.

“It is combined with governmental revenues,” Chad Atkinson said. “The only portion we’ve used is $1 million in water and wastewater management.”

Dechaine also voiced concerns over continuing with the firm, especially with the pending retirement of Finance Director Diane Pelletier and retirement of accounting manager Martha Ford.

“If we are hiring two new people, they should have input on what we do with audit,” Dechaine said.

“… the finance department used to be a team of three people and now it is a team of 12 so we have a lot of internal controls,” said Tedder.

When asked how long the city has been in contract with HintonBurdick, Budget Manager Angela Manninen explained the city’s contract started five years ago with the option to add two years. “Which is common,” Manninen said. “We usually go through five-year audits with the option of two additional years.

“From a finance perspective, an auditor being around longer is more likely to find errors because they know what to look for,” she said. “They are familiar with the entity.”

After Audit Review Committee member Roger Tobler suggested extending the contract for one year instead of two, Chad Atkinson said the city has the option of working with other employees of the firm.

“I have three other partners that could switch and we could also switch the engagement team if that’s in interest to the city wanting to have a different set of eyes,” Chad Atkinson said.

Tedder agreed with the idea of working with other employees at the firm.

“Typically cities do stay with an audit firm for about five years, however, switching the engagement partner on the audit firm would essentially bring on someone looking at it differently,” Tedder said.

Tedder said the city has been happy with HintonBurdick.

Bridges said the audit was easy to understand. “I think it’s wonderful we have no findings,” she said.

“I think some people get confused about the audit review process versus the budget process,” Tobler said.

“The budget process goes into a lot more detail, where this is moving forward with CPAs. Really, it’s an important process, but we’re not going to know the nuts and bolts just through the audit committee like you would going through a budget process.”

“It’s just that I disagree with y’all. I think what you’re looking for is someone from the outside to go into the city and review their accounting practices and how they account for the city’s money,” Rihel said at the end of the meeting.