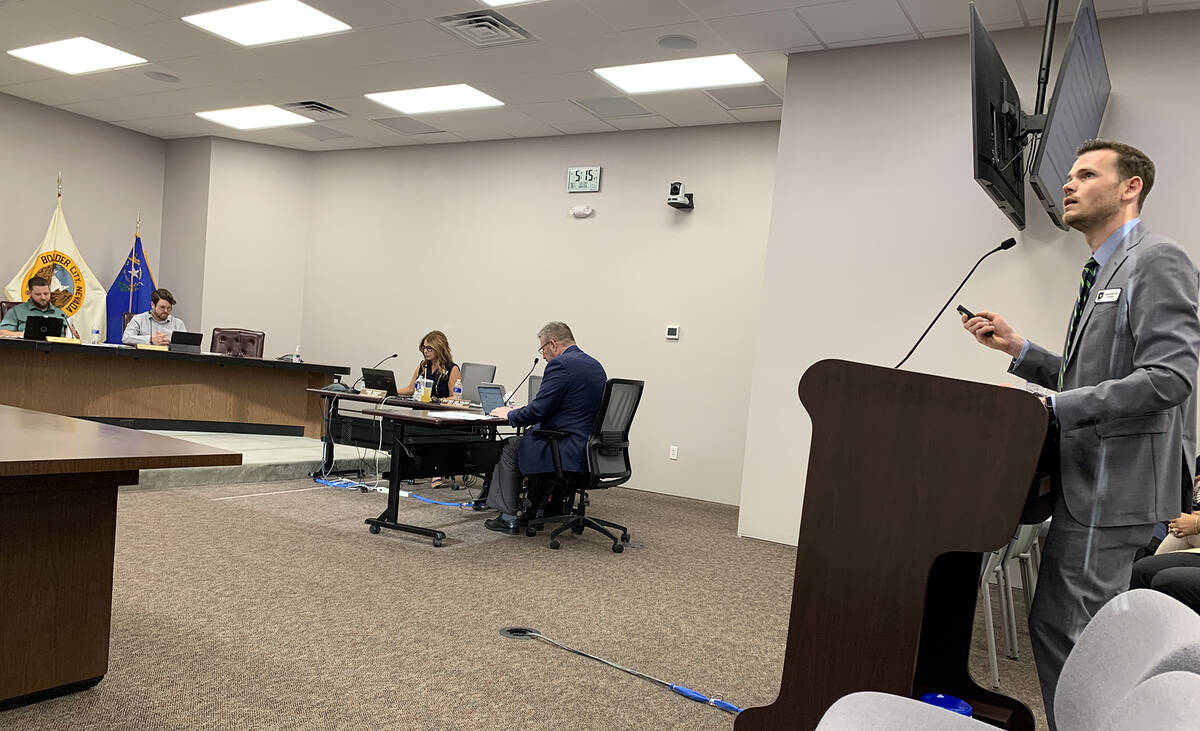 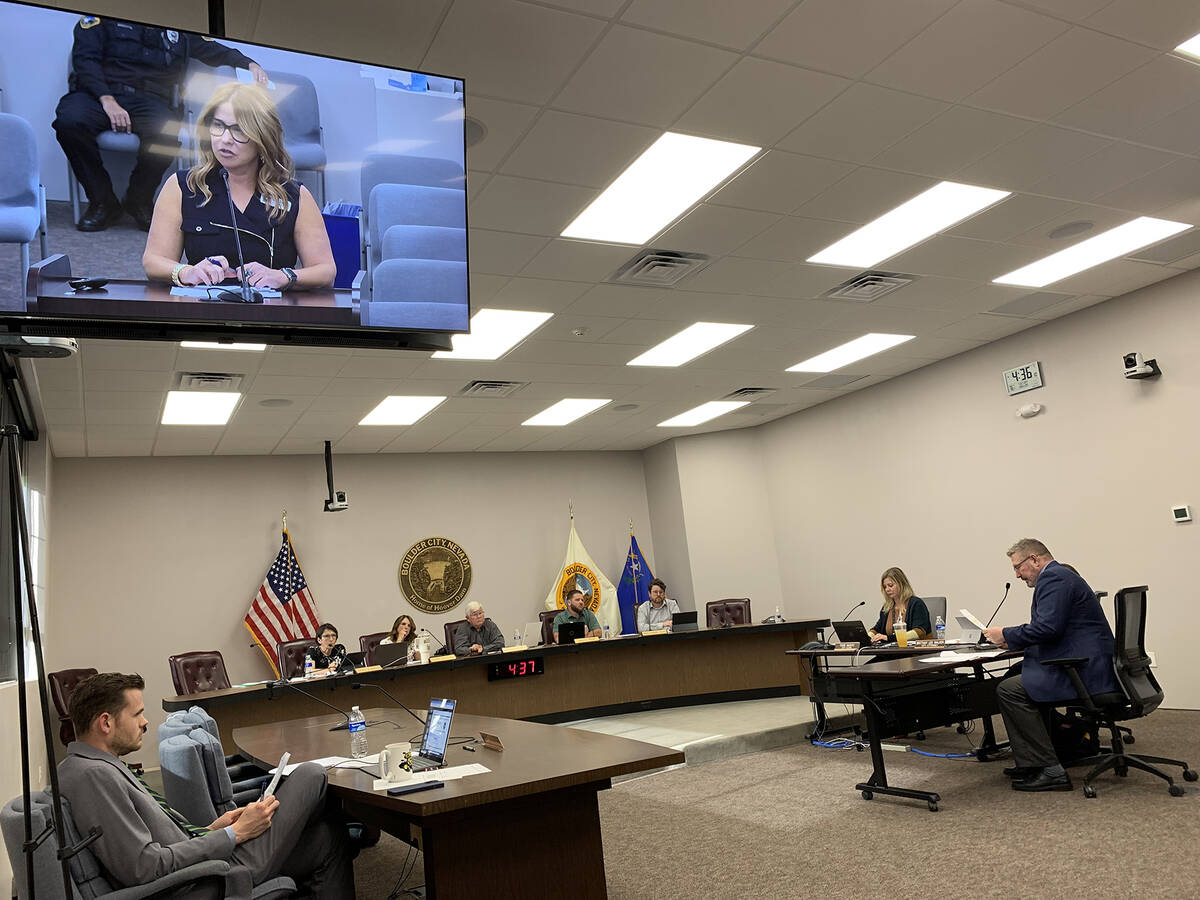 (Hali Bernstein Saylor/Boulder City Review) City Clerk Tami McKay, a seen on the television screen at upper left, responds to a question during an evaluation of her job performance at a special City Council meeting Tuesday, March 29, 2022, in City Hall. 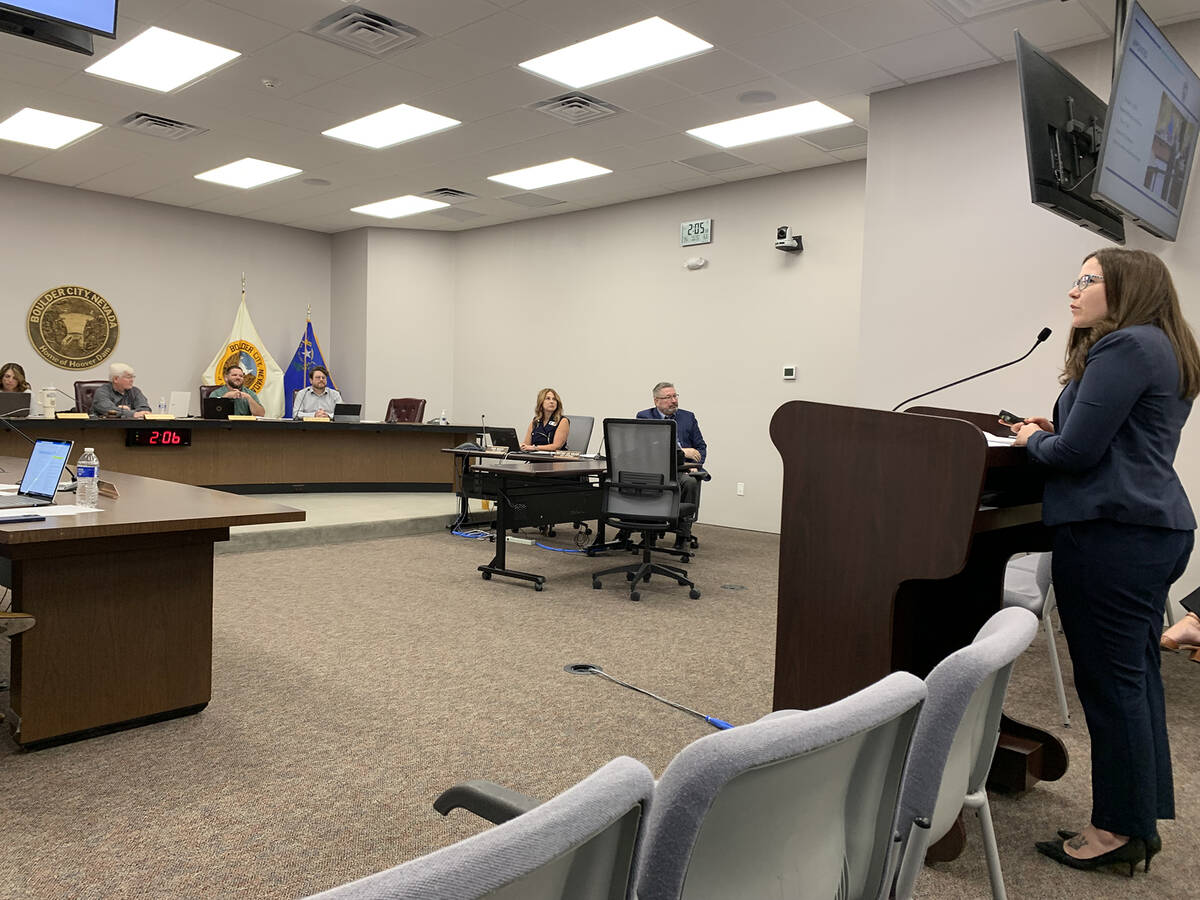 During the nearly five-hour-long meeting, Brittany Walker, Tami McKay and Taylour Tedder were praised for their professionalism, transparency and enthusiasm for their jobs after each started following tumultuous circumstances that saw their predecessors fired.

“I think we have the dream team,” said Councilman Matt Fox. “Their vision is always with the community.”

In return, the trio expressed love for their jobs and said they were excited to come to work every day.

Each of the annual performance reviews began with a presentation by Walker, McKay and Tedder highlighting their duties, accomplishments since taking office and goals for the future. Then, council members were able to make comments and ask questions before completing evaluation forms that were tabulated by Bryce Boldt, director of the administrative services office.

No one received less than an aggregate score of four on a scale of one to five.

Mayor Kiernan McManus opposed giving the cost of living increases, citing that the salary cap was put in place for a reason and that appointed officials are treated differently than hired employees who have collective bargaining agreements and given cost of living allowances.

Although Councilwoman Sherri Jorgensen joined him in opposing the cost of living increase for Walker, who was evaluated first, she voted in favor of them for McKay and Tedder.

Walker has been employed with the city since Oct. 20, 2020, when she was appointed acting city attorney. Her position became permanent May 19, 2021.

She said that since she was hired, she has worked on four personal injury claims, all of which are closed, and 22 property damage claims, eight of which were subrogated and 14 of which were closed, through the city’s Pool Pact insurance.

Additionally, she has assisted on five equitable or breach of nonemployment contract claims with outside counsel, two of which were resolved. Resolutions of the other three are expected later this year or in early 2023, she said, noting that there were settlement attempts on all cases.

Other accomplishments have been reviewing 231 contracts, reviewing or drafting 16 ordinances, representing the city during the 2021 legislative session and helping modernize the department through a new legal research tool and improved service-provider contract.

She said her goals include updating municipal code, working on the airport hangar leases that expire in 2023, streamlining prosecution practices and creating a process for civil enforcement.

Councilman James Howard Adams complimented Walker, stating that her communication with council members has allowed them to make informed decisions.

“We are fortunate to have someone so motivated and professional,” he said.

“The city and council are very lucky to have you,” he said.

McManus said he would like to see more information about issues coming before council to help them make decisions and appreciated Walker seeking outside counsel on matters that were beyond her scope of expertise. He said the amount of work that the city attorney’s office must do is more than one person can handle, but said she has “quickly grown into the position.”

As part of her duties, McKay said she has created agendas for 98 public meetings, and processed 22 ordinances and 167 resolutions for City Council and another nine resolutions for the Redevelopment Agency. There were also 56 committee and commission meetings, which resulted in 887 pages of minutes.

Her office was responsible for creating virtual meetings during the pandemic to ensure transparency and that no open meeting laws were violated; some of the changes have been permanently adopted.

She said she also is responsible for municipal elections; ensuring there are arguments for and against ballot questions; maintaining public records, including processing 547 public record requests; and passport services, which processed 265 passports and generated $11,150 in revenue.

McKay said she also assumed the role of treasurer for the Civilian Military Council.

Her goals for the future include conducting the 2022 municipal elections, implementing a new agenda management system and department cross-training plan, enhancing the public records portal with improved search functions, establishing a text messaging policy, and partnering with Nellis Air Force Base to host Aviation Nation later this year.

McKay told council members that because of the demands on her office she has been unable to take all of the annual leave she is awarded and asked to be allowed to participate in a program that would enable her to be paid for as many as 40 hours of vacation time per year as long as she has taken at least 80 hours off. It is the same program offered to department heads with 20 or more years of service to the city.

Council agreed and voted to amend her employment contract, adding that provision.

Councilwoman Claudia Bridges told McKay she has a “heart of service” and said she is pleased with the job she does.

Jorgensen said she has seen the work McKay and her staff does as both a client and councilwoman, calling them professional and helpful. She said McKay often serves as the face of the city, representing them well.

Tedder joined the city staff Aug. 9, 2021. He said he has 10 employees who report directly to him and is responsible for a total of 317 employees.

He said one of his goals since becoming city manager was to increase his visibility and participation in the community, which he has done by meeting with professional and philanthropic organizations and volunteering at activities including Boulder City Sunrise Rotary’s Wurst Fest, where he served as an auctioneer, and the city’s annual Christmas tree lighting ceremony, where he donned the Hoover the dog costume.

“I don’t believe anyone is ever done learning,” he said, noting he also has attended training and joined professional organizations.

Other accomplishments include improving communications throughout City Hall and the community and saving the city $11,000 by switching cellphone providers.

He said goals for the future include additional cost-saving measures for city vehicles and services, improving customer service and responsiveness for residents and businesses, economic diversification while maintaining the city’s controlled growth ordinance, and successful and timely completion of capital improvement projects.

Adams told Tedder that when tackling projects and questioning why something is done a certain way and being told that’s how it’s always been done he should “review that practice.”

Jorgensen praised the new ideas and increased transparency he brought to the city while Bridges said she appreciated that he always makes time to speak to her, business owners or residents.