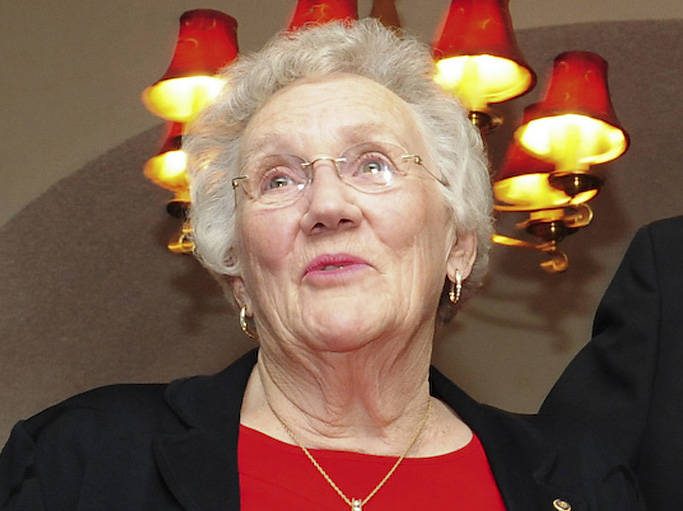 Darlene Burk, a longtime Boulder City resident who helped cultivate the art scene in town, died Tuesday, Dec. 17, at the age of 89.

She was a week shy of her 90th birthday.

During her life, Darlene Burk and her husband, Vern, had four children and curated several local art galleries as well as helped found the Boulder City Public Art Scape.

Their daughter, Jackie Walker, who lives in Boulder City, said her mother was an excellent role model in both her character and attributes.

“My mom was pretty amazing,” she said.

Walker said her parents raised her and her siblings to know God and be strong members of society.

“They taught us how to prioritize life and responsibilities,” she said.

Their experience with the local art scene started in the 1970s when Walker said her dad told her mom he wanted to have an art gallery after he retired.

“So mom went out and got the property for it,” she said.

In 1972, they opened the Burk Gal’ry downtown at what is the current site of the Boulder City Co. Store.

“The first piece of art I ever bought was Cliff Segerblom’s ‘Patriarch,’ which Darlene allowed me to buy on time in 1973 when the Gal’ry was in the space next to the Backstop Sports Pub where the coffee house is now,” said Dennis McBride, Boulder City native and director of the Nevada State Museum in Las Vegas.

In addition to starting his art collection, McBride said the Burks helped his writing career when he was in college.

“Back in the 1970s when Darlene first opened the Burk Gal’ry and I was making my way through college on whatever dribs and drabs I could earn, Darlene got me through by paying me to write PR (public relations) and feature articles about the gallery and the artists she brought in to exhibit,” he said. “I did this for her even into the 1980s when I was working on my graduate degree. Life would have been a lot tougher for me if I hadn’t had that little income from her and Vern for the writing I did for them.”

For the next 21 years, the Burks opened other locations in town before settling in the Boulder Dam Hotel in 1993.

Walker said her parents also helped with the hotel’s refurbishment as well as her mom operated a gift shop there.

At the same time her parents were running their art gallery, Walker said her mom also had a bookkeeping business that helped pay the bills.

“I always felt my dad encouraged my mom to meet all her goals,” she said.

One of those was goals was to be financially secure, which is why her mom worked outside the home.

In addition to their work with the arts, Darlene and Vern Burk were involved with the local Sunrise Rotary Club.

Member Doug Scheppmann, who worked with them on the Boulder City Public Art Scape, said Darlene Burk is one of the city’s matriarchs.

Scheppmann said the Burks exemplified how to treat other people and described them as a class act.

“They were just an exemplary couple in the community,” he said.

Darlene and Vern Burk were married for 68 years until he died in September at the age of 88.

Walker said her parents were strict but also generous in their love for them.

“They made us feel essential in the family and loved,” she said.

The Burks moved to Boulder City from Casper, Wyoming, in the 1960s.

Burk is survived by her daughters Dianna Denman of Minnetonka, Minnesota; Karen Johnson of Las Vegas; Jackie Walker of Boulder City; and son Michael Burk of Longmont, Colorado; and four grandchildren and five great-grandchildren. She was preceded in death by a grandson.