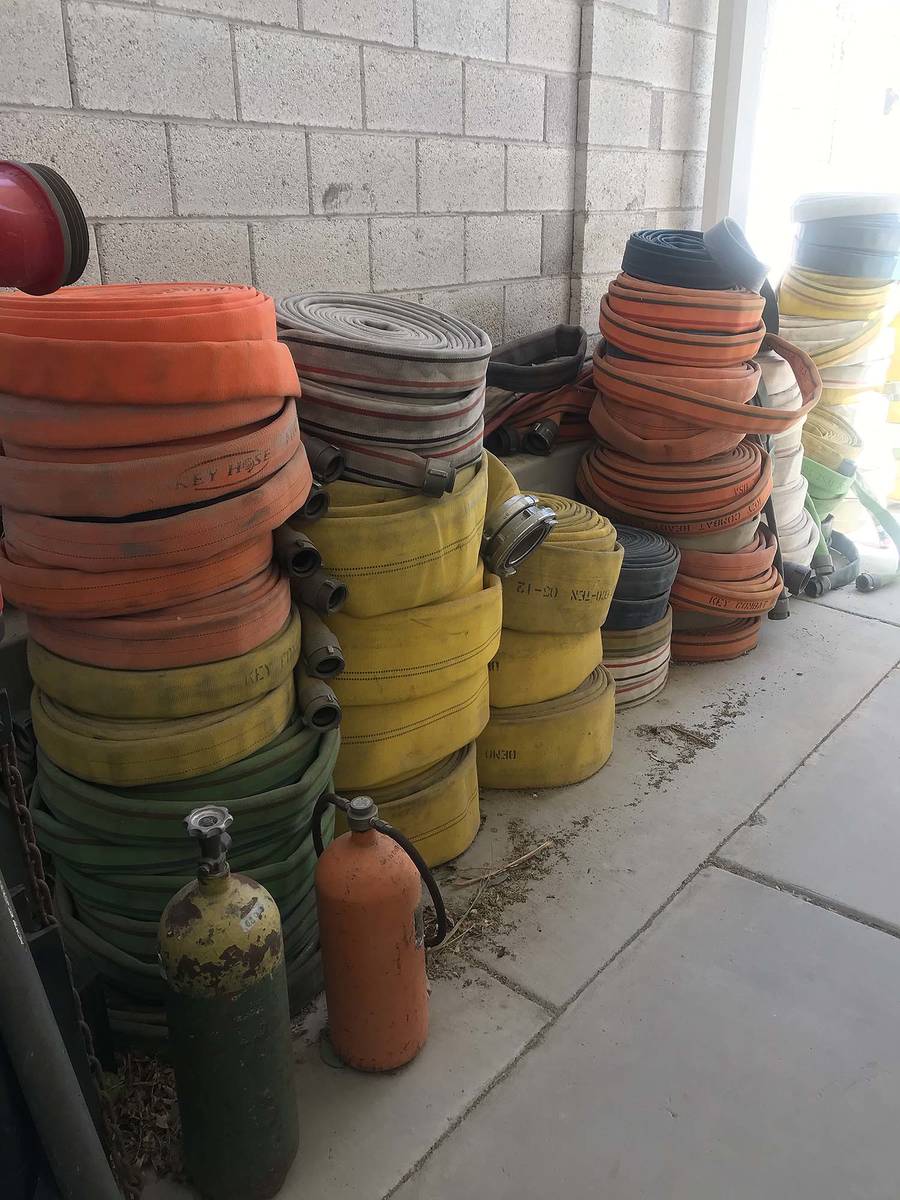 (Peggy Sue Tilden) Hundreds of feet of fire hoses and nozzles were distributed to cattle ranches and volunteer fire departments in Central California after retired firefighter Paul Shapiro of Boulder City donated them when he no longer needed them.

When it came time for the fireman to retire after a lifetime of fighting fires, it seemed only natural that he would have a “fire sale” to dispose of equipment he would no longer need.

For several volunteer fire departments and cattle ranchers in Central California, his gift came at a most fortuitous time.

Peggy Sue and Bill Tilden, who split their time between Boulder City, San Diego and their Oak Crest Ranch near Yosemite, saw a post on Facebook from Shapiro and his wife, Nancy, who were looking for a new home for the hundreds of feet of fire hose and nozzles that he had accumulated while teaching proper water delivery methods.

Paul Shapiro spent 28 years working for the city of Las Vegas and worked as a teaching consultant for about five years until a heart condition sidelined him.

He said the hoses and nozzles were donated by the manufacturer, Key Fire Hose, and its CEO Burke Genthner, for demonstration purposes and he felt the right thing to do was pay it forward so someone else could put them to good use.

“They had never been used in a fire,” he said.

Nancy Shapiro added they couldn’t legally sell them because they were not new.

“It made more sense to donate them,” she said.

The only catch was that they had to be picked up from the Shapiros’ home. According to Paul Shapiro, the smallest hose he had weighed 25 pounds and the largest weighed 110 pounds. There was no way to ship them, he said.

Peggy Sue Tilden said she saw their post as wildfires were raging across California.

“I couldn’t believe what I was seeing at a time of such chaos and devastation and fear,” she said.

“The flames didn’t get any closer than two or three miles from us,” Bill Tilden said.

“That was close enough,” his wife quickly added.

With the exception of a few red, white and blue hoses that Boulder City firefighter Walt West took for a project, the remainder of the hoses were gathered up by the Tildens and their local landscaper, Martin Martinez, who also volunteers with a fire department in Cedar City, Utah.

Bill Tilden said he wasn’t sure what he would do with all the hoses once he agreed to take them, but was sure he would be able to find places where they would be put to good use.

Once they were sorted, the smaller hoses were distributed to fellow ranchers and the larger ones went to volunteer fire departments, including Yosemite Lakes Park Volunteer Fire Department, near the southern entrance to Yosemite National Park.

In all, the Tildens estimate that 20 ranches and four volunteer fire departments received hoses and nozzles.

“They were all thrilled,” Bill Tilden said of the unexpected gifts.

“Peggy Sue texted us and told us where it all went. It just warms my heart,” Paul Shapiro said.

In a public thank you on Facebook to the Shapiros, Peggy Sue Tilden wrote: “All of the recipients (including us at Oak Crest Ranch) are so exceedingly THANKFUL for your generosity. The thing is: we hope we never ever have to use them but if we do, we are very grateful we have them.”