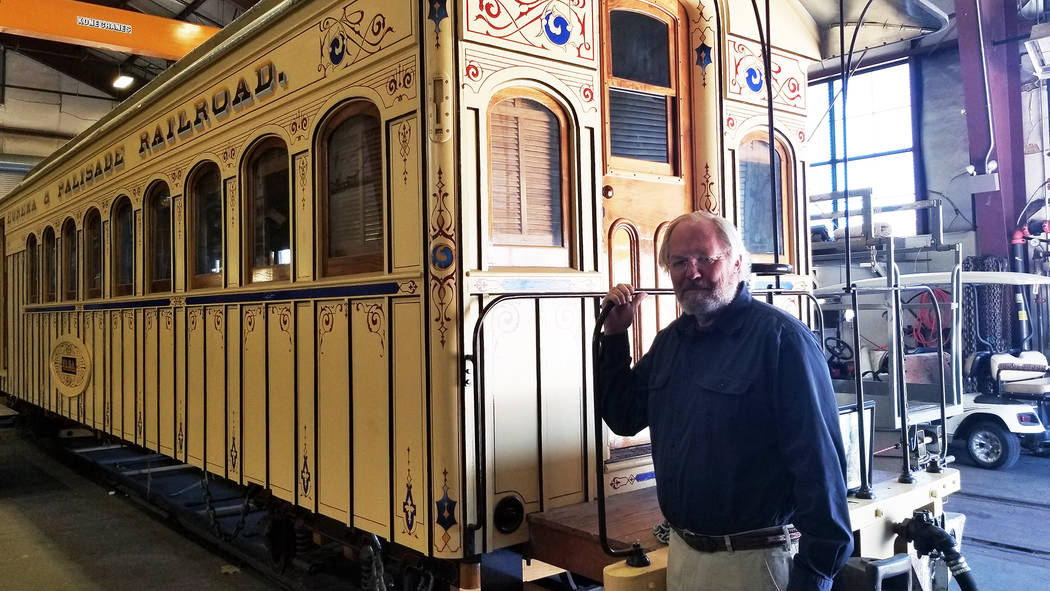 (Celia Shortt Goodyear/Boulder City Review) Nevada State Railroad Museum Director Randy Hees stands with a train car for the Eureka and Palisade locomotive at the museum. A bill allocating millions of dollars for the museum’s planned expansion passed the Nevada Senate on Sunday, June 2. It now awaits the governor’s signature.

The Nevada State Railroad Museum in Boulder City is one step away from securing funding for its proposed expansion as a bill to reauthorize bonds for the project is awaiting the governor’s signature after passing in the Senate.

Assembly Bill 84 proposes general obligation bonds be issued to protect, preserve and obtain the benefits of the state’s natural and cultural resources. It passed the Senate Finance Committee on Sunday, June 2, and provides $217.5 million in bonding authority for projects across the state.

The bill allocates $30 million for state museums, including the expansion of the Nevada State Railroad Museum in Boulder City, and money to renovate and improve the depot in Ely.

“Passage of AB84 was truly a team effort on so many levels,” said Al Noyola, city manager. “From the support of the mayor and council, to the efforts of City Hall staff, the determination of the Boulder City Chamber of Commerce and Economic Vitality Commission, to the leadership of Nevada state museums, so many people advocated for this bill. It is a great day for Boulder City and the entire region.”

The Nevada State Railroad Museum, 601 Yucca St., is planning to expand its facility to include a 9,700-square-foot visitors center, new boarding platforms, display buildings and linear park with interactive features for children and links to the River Mountains Loop Trail. The expansion will be in three phases and is estimated to cost $35 million.

“We will get $20 million roughly to expand our railroad museum, but it may be two years before we see it,” Hees said.

The bill issues bonds, and it will take time to find buyers for them. During that time, the city will be looking for more funding sources.

Hees said he hopes they can get approximately $2 million before the bonds are sold so that the architectural work can continue and they can hit the ground running when the state money comes through.

“We’ve worked long and hard to make the railroad museum and linear park a reality, so it’s reassuring to see this bill draw such overwhelming support from both parties in the Assembly and Senate,” he said. “This project will bring increasingly more visitors here to learn about the rich history of Boulder City.”

Rowland-Lagansaid : “Not only will this approval help us build regional tourism for Southern Nevada, it will assist in many worthy conservation programs and projects that will remind us of … days behind us and will propel us with great energy into great days ahead.”

Hees said he expects the expansion to be an 18-month build.

AB84 is still awaiting a signature from Gov. Steve Sisolak. Voters originally approved the bond in 2001. The reauthorization will not affect Nevada’s general fund.

In June 2018, the city received a $350,000 grant from the National Park Service’s Land and Water Conservation Fund to help pay for amenities in the expansion.