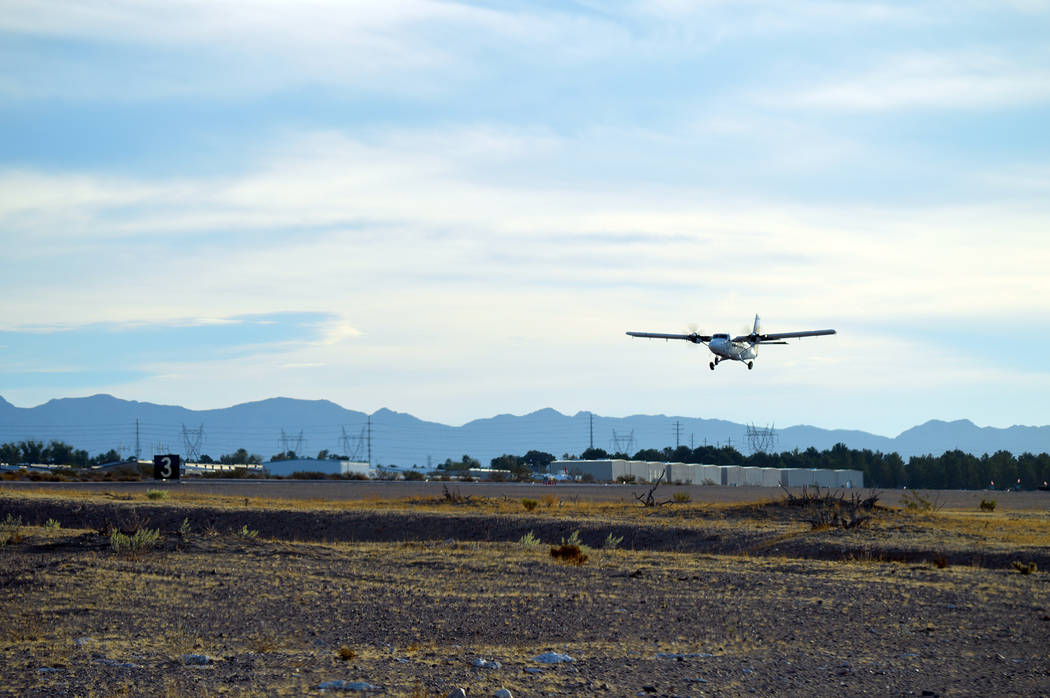 Celia Shortt Goodyear/Boulder City Review A plane takes off from a runway at the Boulder City Municipal Airport. The airport is moving forward with installing an airport control tower to increase safety at the facility.

The Boulder City Municipal Airport could have a working control tower in approximately four years if the City Council approves its proposed five-year capital improvement plan, which includes funding for design of a tower in the 2019-2020 fiscal year.

In April, the airport was approved to participate in the Federal Aviation Administration’s control tower program, meaning it could install an air traffic control tower.

Airport Manager Jennifer Lopez said she hopes have it in service by August 2022, as funding for installation of a tower is in the city’s proposed capital improvement budget for 2020 and 2021.

“If (the capital improvement plan is) approved by council, the next step would be to complete a site selection study and environmental assessment as required by the Federal Aviation Administration,” she said. “Both studies require a great deal of public and government participation prior to moving onto the next step, which is design of the structure and ultimately construction.”

Lopez said the tower was added to the proposed capital improvement budget for several reasons, including airport safety by monitoring arrivals and takeoffs.

“Safety is first and foremost on the minds of everyone who works at and uses the airport,” she said. “The amount of air traffic has increased over the past decade, and typically the FAA recommends an air traffic control tower once an airport reaches 100,000 operations a year. … Boulder City Municipal Airport passenger counts indicate that the airport has reached and possibly surpassed the 100,000 annual operational threshold, and therefore a tower has become an even greater priority.”

Funding was also an issue because until recently the airport did not have enough to finish the estimated $4.95 million project.

“The bill removes the $2 million Airport Improvement Program grant funding cap to plan, design and construct an air traffic control tower,” Lopez said. “Up until the bill was signed, the airport was lacking $2.95 million in funding to complete the facility. The FAA will now pay up to 93.75 percent of the total project cost.”

Lopez said current estimates have the airport providing $309,000 and the FAA providing $4.635 million to build the air traffic control tower. The city would also have to pay for its maintenance.

“Safety is always an airport priority, and in consideration of the recent news, the city is reviewing sources of funding and working with the FAA to prepare for possible program participation,” she said. “Participation in the contract tower program would provide federal funding to pay for the air traffic controllers.”

At several recent Airport Advisory Committee meetings, operator Bob Fahnestock expressed concerns about safety at the airport and said he thinks it should have an air traffic control tower.

Additionally, Lopez said the airport has a specific timeline to complete the tower, or it will have to reapply to the FAA program.

Boulder City Communications Manager Lisa LaPlante said she was not sure when this item would come before the council.