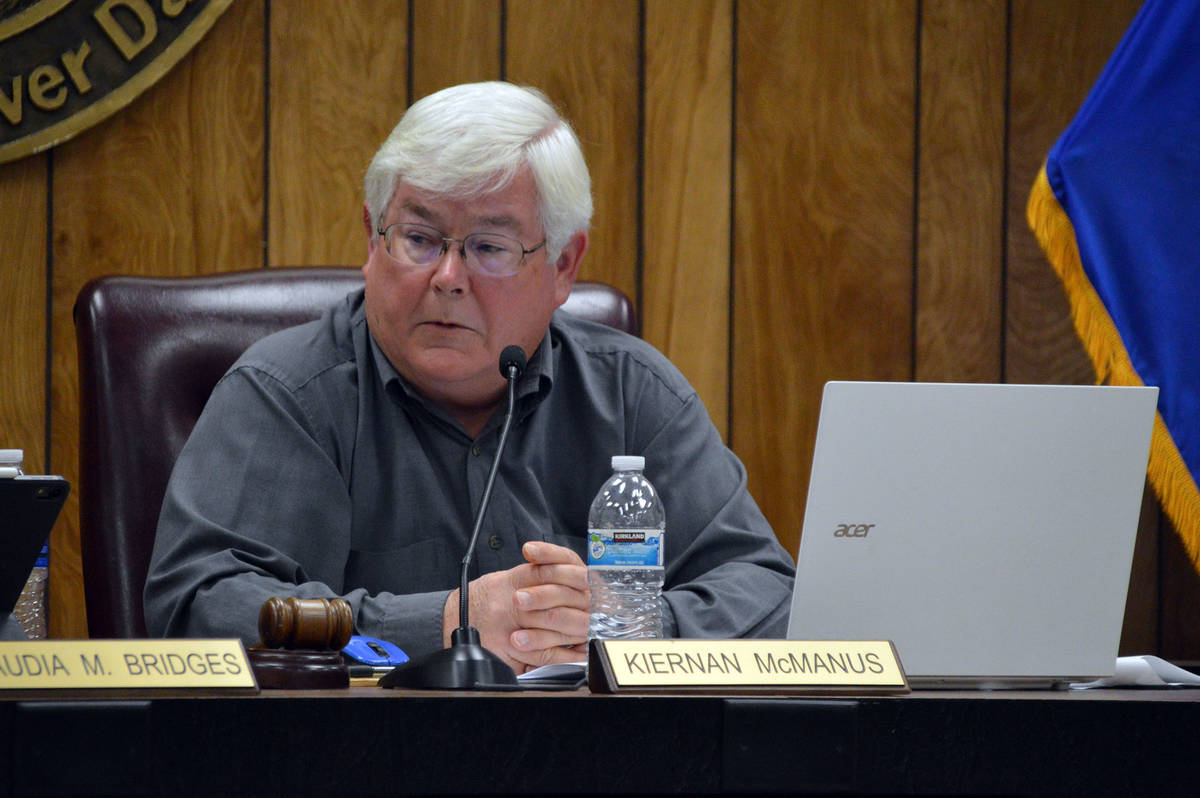 The Nevada Attorney General's office recently determined that Mayor Kiernan McManus' agenda item and disagreement with City Attorney Steve Morris on Oct. 22 were not violations of the open meeting law.

City Council did not violate the open meeting law at a meeting in October, according to a recent opinion from the Nevada attorney general’s office.

Former Councilwoman Peggy Leavitt filed the complaint Dec. 18, which was about an item kept on the Oct. 22 meeting agenda after City Attorney Steve Morris warned it could be a violation. Her specific allegations were that the council had violated the requirement that the agenda items be “clear and complete,” that it violated the open meeting law by including the agenda item and that actions by Mayor Kiernan McManus, Councilwoman Tracy Folda and Councilwoman Claudia Bridges also violated that law.

“The open meeting law is intended to provide notice to the public of issues that will be discussed and possible actions by the City Council,” said McManus. “The opinion from the attorney general’s office confirms that my request and actions did just that.”

The item was for the discussion and a possible staff directive about hiring an outside attorney to review and advise council members on Nevada’s open meeting law; the employment contracts of the city attorney, city clerk, city manager and municipal judge; and other issues as determined by a majority of the council. McManus requested it be put on the agenda.

According to the opinion published by Attorney General Aaron Ford’s office, its investigation determined the questioned agenda items were “clear and complete on their face.” It also said the meeting materials supported “the finding that the agenda provided sufficient clear and complete statements of topics to be considered.”

Leavitt said she was “shocked” and “disappointed” with the opinion and that it sets a “dangerous precedent” for Boulder City and all of Nevada.

“I have attended numerous hours of training on the Open Meeting Law … as an elected official and this ruling is contrary to what is being taught by the AG’s own office,” she said. “The basic tenant of … Nevada’s OML is to ensure that governmental deliberations are to be conducted openly. A critical aspect of that openness is that the general public understands exactly what will be discussed and that agenda items are ‘clear and complete.’ … In one of the OML trainings I attended the presenter stated that if there is any question about meeting the standard of ‘clear and complete,’ err on the side of caution. This obviously did not occur. Even when public comment pointed out that citizens did not understand what would be discussed, the mayor continued on with his agenda, completely disregarding what members of the community were telling him. This is not a mayor who represents all of Boulder City but only his committed followers.”

At the start of the Oct. 22 meeting, Morris recommended the item be removed from the agenda because he said it lacked the specificity required. McManus said he disagreed with Morris and would not remove it. The meeting packet also included two emails from Morris to McManus warning of the potential violation and a memo sent to City Clerk Lorene Krumm requesting the item be put on the agenda.

“The clear outcome of the opinion is that there was no basis to the complaint filed or the opinions stated by City Attorney Steven Morris,” said McManus. “My purpose in requesting the City Council consider retaining an independent attorney to provide information to council members was due to a lack of confidence I had in some of the information appointed officials have provided. I continue to have the same concerns regarding the reliability of information provided to the City Council.”

Another of Leavitt’s allegations in the complaint said that McManus’ practice of sending memos to city staff, council members, and the public before the meeting constituted “deliberation and/or serial communication.”

According to the opinion, it did “not amount to serial communication and deliberation in violation of the OML” because the memo was addressed to Krumm and not to other council members. Additionally, there was no evidence submitted “that indicated that any other council members provided any input on the matter in advance, or outside of, the Oct. 22, 2019 meeting.”

“I sincerely appreciate the attorney general’s opinion in this matter; and while I was uncertain whether this constituted an Open Meeting Law … violation I wanted the opportunity to share my thoughts. … I also moved the item forward because I verbally wanted to oppose it in discussion on the record,” said Bridges. “As I said in the meeting in October, I wanted to make it clear that the expense of hiring an attorney was not necessary to review the contracts of our appointed staff.”

“I am pleased that a decision has been reached in this matter,” said Councilwoman Tracy Folda. “I remain unsurprised of the decision made by the attorney general’s office that no open meeting violation had occurred. As a City Council member, I have always strived to carefully study and contemplate each item that comes before council. The evening of Oct. 22 was no different, two opposing thoughts were presented on this matter, and I studied them out and voted accordingly.”

The office also found that the open meeting law “does not require a public body to approve a proposed agenda item prior to proceeding with the public meeting.”