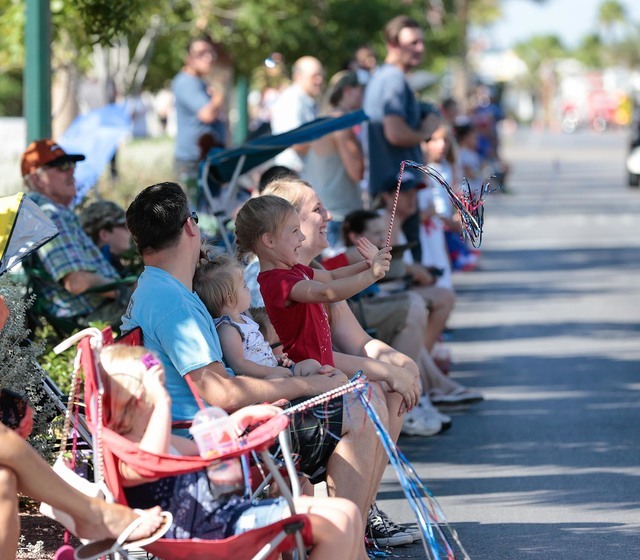 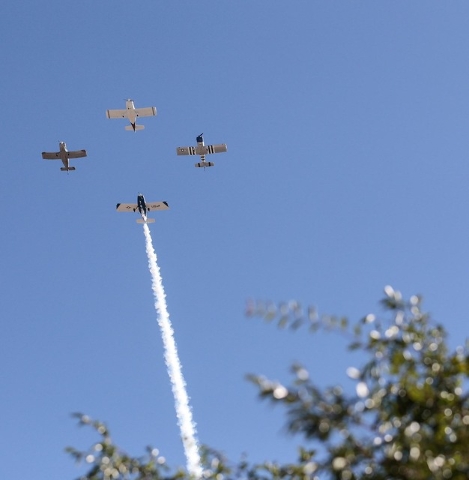 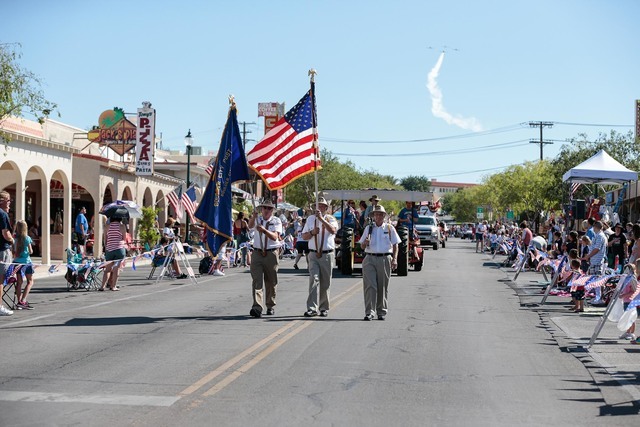 Members of the American Legion, Boulder City Post 31, carry the colors at the start of the 68th annual Damboree parade, as the Boulder City Veterans Flying Group makes its way over head in Boulder City on Monday, July 4, 2016. Donavon Lockett/Boulder City Review 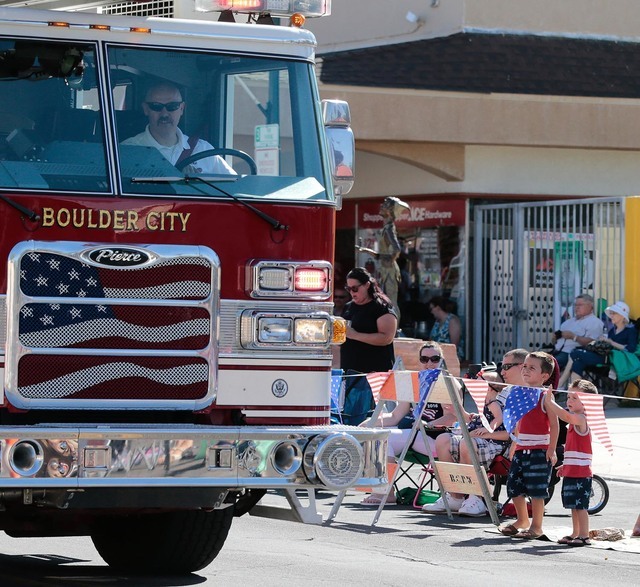 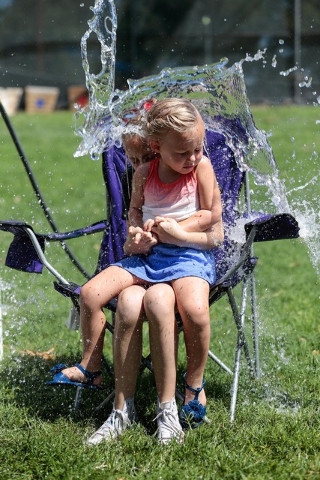 Splash tank participant Deville Busch holds Caedyn Craig on her lap as they both get a bucket of water dumped on them during the 68th annual Damboree in Boulder City on Monday, July 4, 2016. Donavon Lockett/Boulder City Review 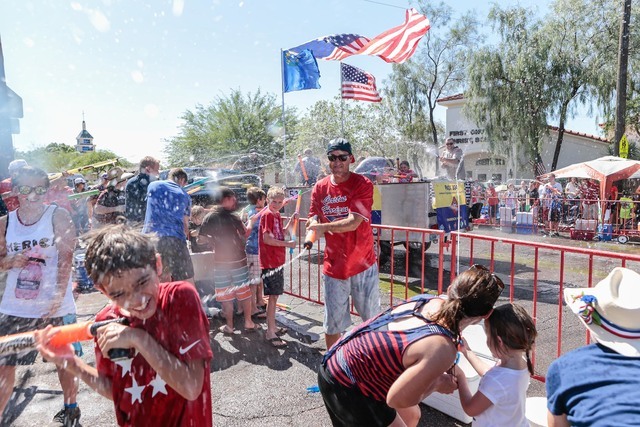 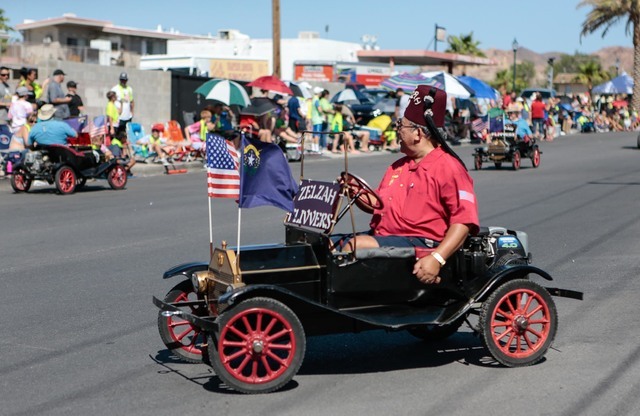 With a nod to the citys historic past and a mood ready to celebrate, the 68th annual Damboree brought together hundreds of people to mark Independence Day on Monday.

A free pancake breakfast prepared and served by members of the Rotary Club of Boulder City, along with several political candidates, started the day. Club president Larry Archuleta said they served about 1,000 people.

Even though the line around Bicentennial Park was long, smiles were plentiful as people waited to get their freshly flipped flapjacks and sausage.

At 9 a.m. the roar of vintage planes could be heard as members of the Boulder City Veterans Flying Group kicked off the parade with several trips above Nevada Way. Nearly 70 entries highlighted this years parade, including a history-making float presented by the Las Vegas Wedding Chamber of Commerce that featured one pair exchanging their wedding vows and another renewing theirs.

Students from Mitchell Elementary School were honored as the grand marshals. The school was named a Lighthouse School for The Leader in Me program and inspired the theme: Lighting the Way.

As is tradition, the latter half of the parade consisted of water entries, with participants and spectators engaging in a several-blocks-long water fight that drenched nearly everyone along the route.

The vintage decor used on the parades announcing stands carried over into Broadbent Park, where the parade ended and the party continued throughout the afternoon.

At 11 a.m. the Damboree ceremonies began with the raising of the flag and a performance of the national anthem followed by greetings from local dignitaries, such as Little Miss and Mister Boulder City.

The ceremonies also included the presentation of the parade trophies, honoring the most impressive of the more than 70 entries that cruised through the town. Boulder Dam Credit Union and Faith Christian Church brought home first and second place, respectively, for their takes on the Lighting the Way theme.

Advanced Dental Care won first place in the most creative category, with its float overflowing with jungle animals, and the Jupiter Express Railroad took home second place as the class of 1971 celebrated its 45th anniversary from train cars.

After the ceremonies, the festivities got underway with food and drink vendors, carnival-style games with an historical twist and live music from Las Vegas rockers The Third Degree.

At noon, dozens of children lined up around the Boulder City pool for the coin toss and dove into the water in search of their share of $350 of shiny silver resting along the floor.

At 1 p.m., the Boulder City Parks and Recreation Department hosted a series of competitive games and contests with children and adults taking their turn at sack and dizzy bat races, before finding out who were the fastest runners in the park with a sprint and showing their might with a hotly contested match of tug of war.

The fun in the park not only brought together hundreds of Boulder City residents, but also attracted families from across the Las Vegas Valley. Brooke Thomas and her daughter Sareya were among those who made the drive.

Its been so much fun, and its so beautiful out; its kind of like a mini-vacation, Thomas said. Everyone is so welcoming and friendly, and Sareya found eight $1 pieces in the coin toss. Well definitely be back next year.

In fact, we will be back tonight for the fireworks.

The Damboree ended with a bang as fireworks lit up the night sky, giving Damboree-goers a sparkling show to mark another birthday for America.

It was just a great day, Parton said. I did everything. I went to the parade, went to The Dillinger, and the fireworks were just amazing. The whole day was just a perfect experience.

A day of relaxing and celebrating was even sweeter for Parton because he has had to work on the Fourth of July for the past two years.

I am always working during the holiday, so to sit back and enjoy everything for the first time in two years was great, he said.

Some people still had to work the holiday, but that did not stop them from enjoying the rest of the night they were given.

Trevor Stephens, a maintenance technician at Tender Loving Care Senior Residence in Las Vegas, worked the holiday, but found time to have a quick drink with friends at the Backstop Sports Bar.

I had work so I missed the fireworks, but that is OK, Stephens said. You can always have a great Fourth of July as long as you can take some time for family, friends and food. No matter what you do the Fourth is always the same great holiday.

When the fireworks ended, people who saw the show left in masses, but a few Boulder City residents had no intention of ending the night and decided to shoot off their own fireworks.

A group of children and their parents lit sparklers and small fireworks that would spin and burn a variety of different colors.

Fireworks are the best part of Fourth of July, said Hovan Henninger, 10, one of the children lighting the fireworks with his family. It is really cool to be with your friends when you watch them light up.

When the Damboree ended and people headed home there didnt appear to be a single sad face in the crowd on Americas birthday.

Editor Hali Bernstein Saylor contributed to this article. She can be reached at hsaylor@bouldercityreview.com or at 702-586-9523. Follow @HalisComment on Twitter.