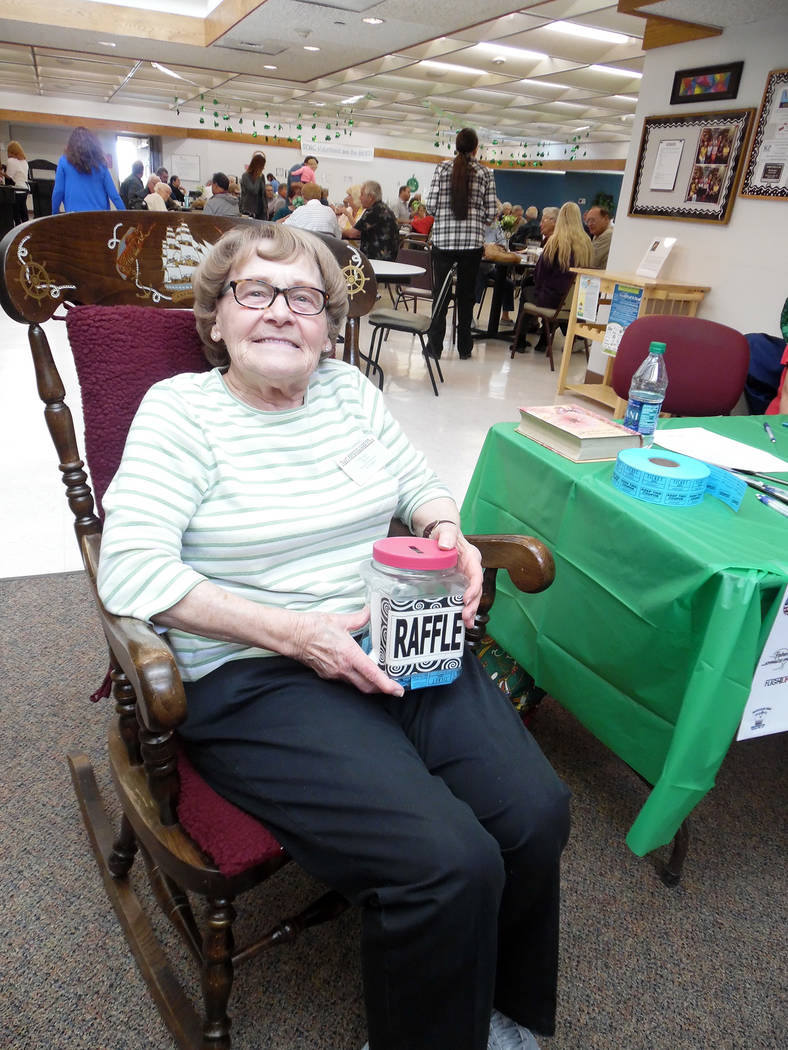 Hali Bernstein Saylor/Boulder City Review Senior Center of Boulder City board member Mae Kahl does double duty selliing raffle tickets while rocking to help raise funds for the center's Meals on Wheels program during their ice cream social on March 4. She vowed to rock for 50 hours and has been collecting donations from friends and fellow community residents.

Local senior citizens and residents are putting the fun in fundraiser with the Senior Center of Boulder City’s second annual Rock, Roll & Stroll on Saturday.

Part of its March For Meals campaign, the Rock, Roll & Stroll raises funds primarily for the center’s Meals on Wheels program.

“Last year we raised $20,000, and it was amazing to me,” said Susan Johnson, president of the Senior Center’s board of directors. “We hope this year to match or exceed that.”

Each month the Senior Center provides and delivers 50-60 meals to homebound seniors, including two frozen meals on Fridays for the weekend. The meal deliveries also double as wellness checks, Johnson said.

Victoria Mason, executive director of the Senior Center, said their most current records show it costs the center $7.76 per meal, not including delivery, which is done entirely by volunteers.

Although they receive grants from the state that reimburse them at $2.65 per meal and request a $2 donation per meal, that leaves them with at least a $3.11 deficit for each meal provided.

“If we average that out for 12 months, we get $46,314,” she said, noting that February is a short month and those numbers are low.

Some of that deficit is covered by extra funds provided several times per year by the United States Department of Agriculture’s Nutrition Services Incentive Program. Mason said that offers a maximum of $25,000 a year.

“This is why fundraising and the community support are so important to us,” she said.

This year’s event has moved to Bicentennial Park, which is more centrally located and allows the Senior Center to partner with Lend A Hand of Boulder City, which is presenting its second annual Caregiver Fair the same day in the adjacent recreation center.

“It made sense to combine with Lend A Hand. We are helping the same people,” said Johnson, adding they hope to make this an ongoing event.

Festivities are scheduled from 10 a.m. to 2 p.m., with registration starting at 9:30 a.m. A variety of activities and entertainment are included.

Opening ceremonies are planned for 10 a.m., with a local Cub Scout troop presenting the flag and Peggy Randall of the American Legion leading the Pledge of Allegiance. After an official welcome, the rocking, rolling and strolling will begin in earnest, Johnson said.

Marcela Fastow, a Senior Center board member, will serve as mistress of ceremonies and has arranged for multiple entertainers to perform throughout the event.

Hot dogs, hamburgers and chips will be available for purchase. Additionally, several local girls who are homeschooled and need service hours will have a table with sweet treats; proceeds will be donated to the Senior Center, Johnson said.

Prior to Saturday’s event, representatives from the Senior Center are setting up a table in front of Boulder Dam Credit Union to sell raffle tickets.

Also, “Community Champions,” those who are leaders in the community, are learning more about the program this week by helping volunteers deliver meals to homebound seniors.

▶ Average deficit per month (after grants/donations): $3,900