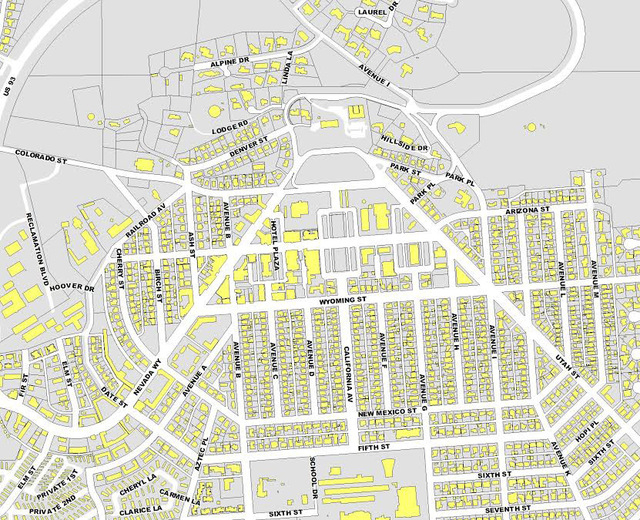 It is a well-known fact that Boulder City is a planned community. In 1931, the Bureau of Reclamation hired Saco Reink DeBoer, a recognized master of city planning, to design the city. DeBoer was also a great landscape architect and artist.

But how many of us have looked at Boulder City as a work of art?

This isosceles triangle, which defines the outline of the city, is then bisected from north to south by California Avenue, which gives the city plan two more triangles: two right angles — the 90-degree angles at California Avenue and New Mexico Street.

The aerial map shows triangles of every description throughout the city, further stablizing and reflecting the strength of Boulder City.

However, Boulder City is much more than stabilizing geometric shapes. DeBoer, as the landscape artist, filled his rough canvas with parks, parkways and trees that give the city its color, texture and respite from the intense heat of summer in the desert. He created the “oasis in the desert” that is Boulder City.

That is all good, but the city is not yet complete. A city needs buildings. But not just any buildings that house the government, municipal and cultural activities of the city. They must be buildings that rise above the city as landmarks.

The U.S. Bureau of Reclamation building sits at the apex of the triangle and, along with the expansive grassy parks that lead up to it, represents the guiding force behind the building of Hoover Dam and, therefore, the city that was built to house the administrators and employees of the bureau.

To return to the idea of the city’s shape as a reflection of artistic adherence to the basic forms found in nature, consider the following as a few examples:

■ The square tower of the water treatment plant and the circular water tank to the west.

■ The triangular steeple of St. Christopher’s Episcopal Church to the east.

■ The octagonal entrance of the Los Angeles Department Water and Power building on the triangular piece of land at Nevada Way where Ash and Birch streets come together.

Each of these city landmarks was created in one of the basic forms found in nature: square, circle, triangle and octagon.

The geometric design of Boulder City is just one way to perceive its unique appeal. There are so many ways to see and enjoy this city of ours.

Susan Stice McIntyre is a native of Boulder City, a first-generation 31er, and former member and chairwoman of the Boulder City Historic Preservation Committee.