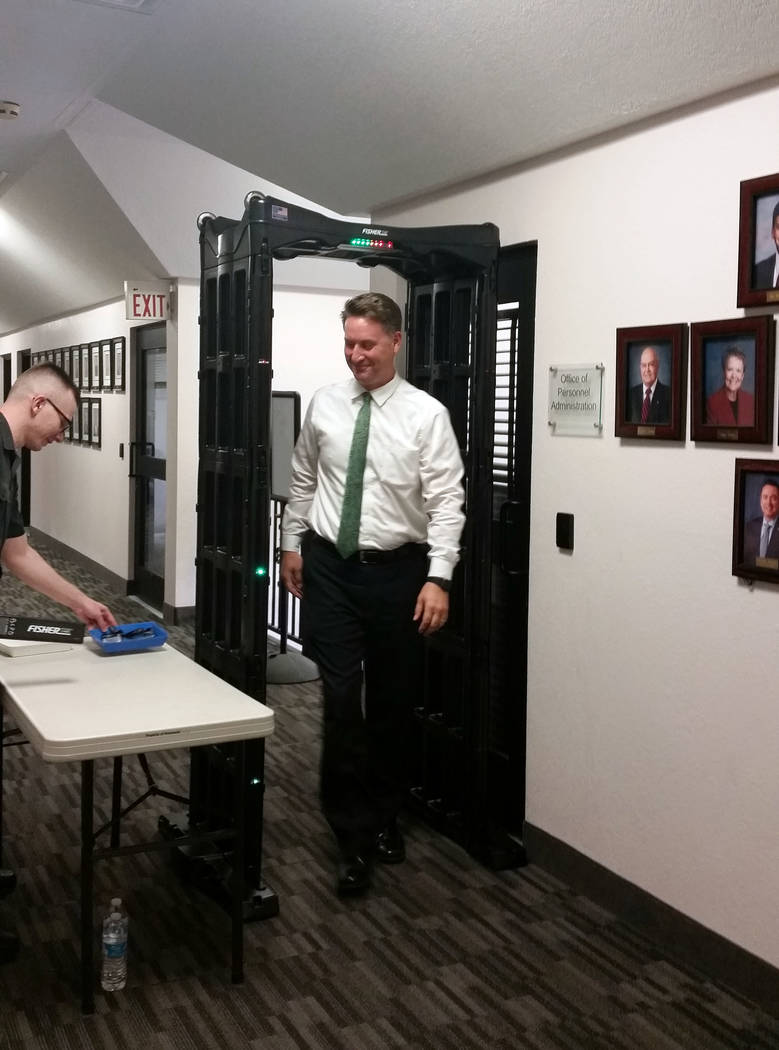 Celia Shortt Goodyear/Boulder City Review City Attorney Steve Morris goes through a metal detector at City Hall before the City Council meeting Tuesday. The metal detectors are a new security measure in place at the building. 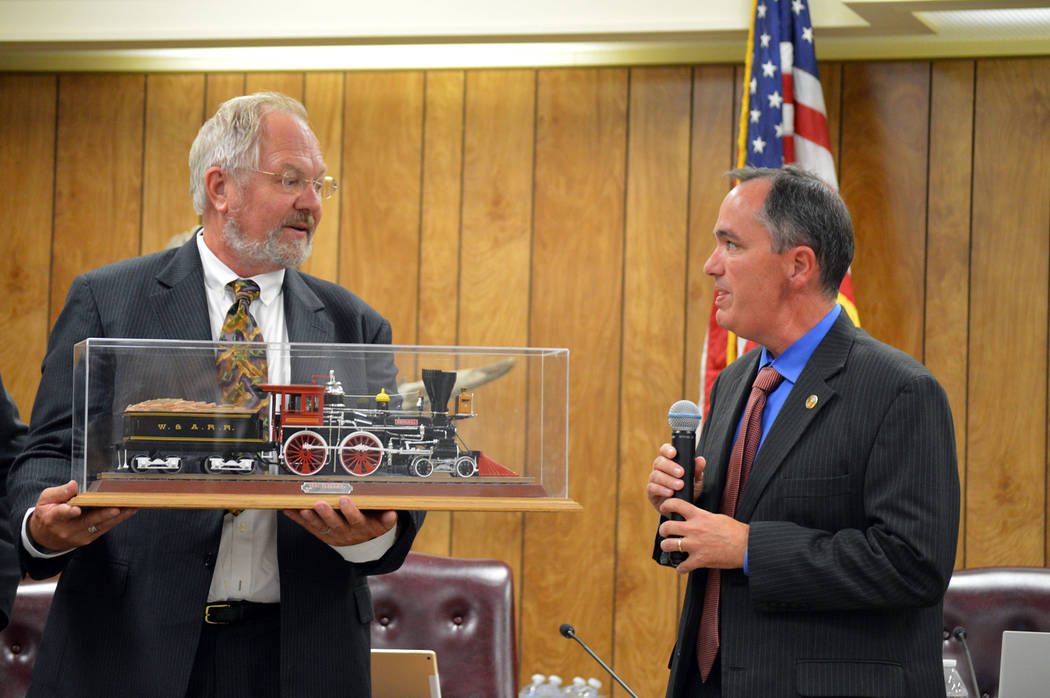 Celia Shortt Goodyear/Boulder City Review Celia Shortt Goodyear/Boulder City Review Community Development Director Michael Mays, right, presents Randy Hees, director of the Nevada State Railroad Museum, with a model of a General locomotive, a steam engine built in 1855, as a gesture of good faith for the city’s partnership to help complete the museum’s expansion. City Manager Al Noyola said the city had been given the model several years ago and was planning to sell it, but decided to donate it to the museum instead.

Bill 1827 allows the responsibilities of utility maintenance and electrical system to be moved from the public works department and moved to the new utility department.

Community Development Director Michael Mays said the new department will encompass the planning, maintenance, and day-to-day operations of water, wastewater, landfill and electrical as well as enhancing transparency and accountability.

Each utility will now operate as a separate business center and oversee its utility rates and increases. Each could also be adjusted annually due to capital, operation and maintenance costs.

The new department will be headed by a director, who will have a starting salary of $132,797. According to city documents, the director will bring specialized expertise and executive management oversight in the public utilities.

Council approved that classification title and salary as well a position for an electrical engineer with a starting salary of $100,921.

According to city documents, the utility revenues, expenditures and funding will be represented in one overall utilities budget.

It will also forecast the need for additional operating funds, monitor and approve expenditures, and monitor and evaluate service delivery methods and procedures, ensure service compliance, and identify improvement opportunities. It is still in charge of maintaining city property.

None of the council members had any comments or questions about the new department and classifications.

Also during the meeting approximately 30 residents and business owners stood to express their support of a change to the city ordinance to allow all-terrain vehicles and golf carts to travel on local streets and for a trail system.

This item was not on agenda, but CEO of the Boulder City Chamber of Commerce, Jill Rowland-Lagan, said during public comment that it was there about 10 days ago but had been removed.

She spoke on behalf of those standing and expressed their support of a trail system and how it would be good for the town.

■ Approved an agreement between the city and Douglas Beavers for water supply. This is a continuation of a long-term agreement for water. It was approved 4-1 with Councilman Kiernan McManus voting against it. He said it seemed like the city was taking on a “great deal of burden” for a business that did not pay taxes to the city.