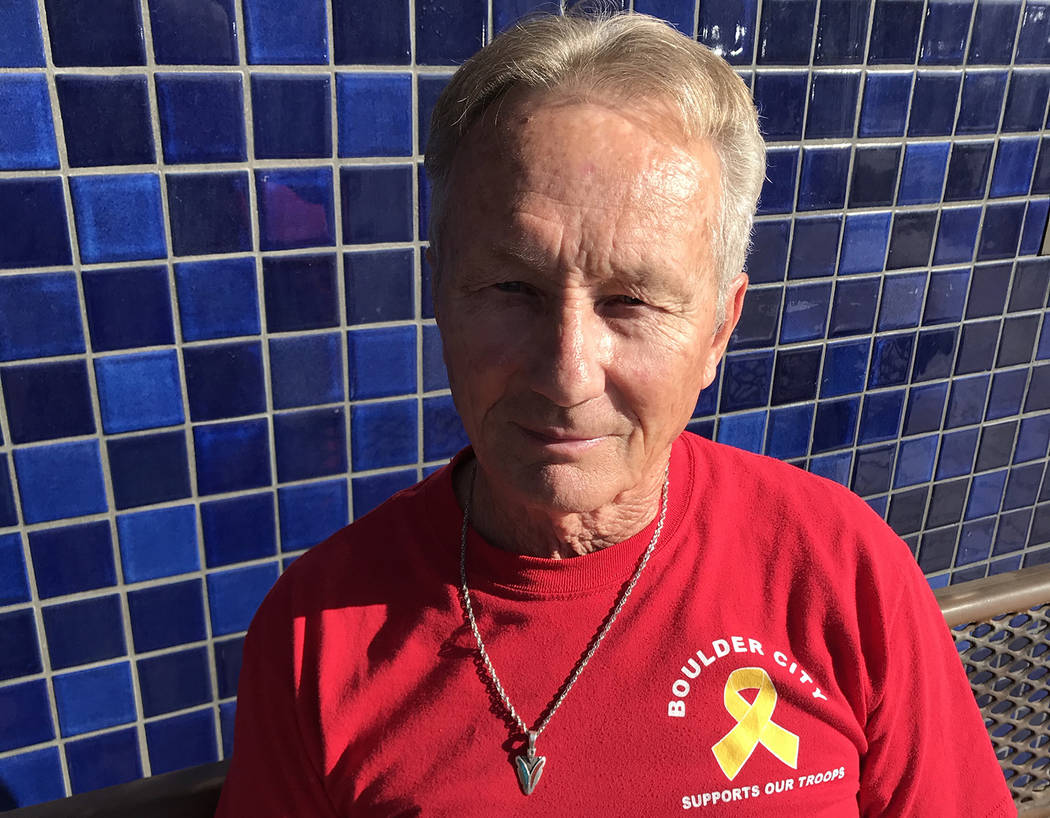 The decades that have passed since Jerry Stewart wore a Navy uniform haven’t dulled the memories of what he saw during the Vietnam War. Some are so painful that just the thought of them brings tears to his eyes and makes it difficult for him to speak.

He spent 10 years working as a combat photographer, documenting the activities of other service members, though he wasn’t allowed to keep any of the photographs he took.

A few days before Veterans Day, the man who winters in Boulder City spoke about his time in the service of the nation for which he earned six medals, including a Bronze Star, Purple Heart and good conduct award.

He can, however, say he was in Vietnam, Cambodia and Laos.

“I went around the world two times,” he said.

Though he is proud of his time in the Navy, he said he also is saddened by what he saw.

“I brought my brother-in-law back in a body bag. He was 18,” Stewart said.

Stewart was 17 on Sept. 26, 1960, when he enlisted in the Navy. He said his mother was having money problems trying to raise four children, so he quit school and joined the military.

The nation was in the midst of the Vietnam War, and he said he thought it was better to enlist and pick the branch of service he preferred than be drafted. Immediately after completing boot camp, he was assigned to work on the aircraft carrier the USS Ticonderoga, taking care of a pilot who flew an F-57.

One day, his skipper asked him what he really wanted to do, and Stewart said he wanted to be a photographer. The skipper made arrangements for Stewart to go to a photography school in Florida, and the next day he died.

Tears well up in Stewart’s eyes as he recalls the day the pilot missed the cable to stop him while landing before he fell off the edge of the flight deck into the ocean. A helicopter started to raise the jet just as Stewart said he was getting ready to jump off the deck into the water, but everyone quickly realized it was too late.

When he left the Navy, Stewart spent a few years in Portland, Oregon, painting oil tankers at a shipyard. He moved to Nevada in 1982 and joined the union as a painter.

“I probably painted every casino in town,” he said.

He retired 10 years ago and has been volunteering at the Senior Center of Boulder City for the past three years.

Through the Operation Recognition program and with the help of Boulder City resident Charm McElree, he recently learned he will receive his high school diploma (he obtained his GED years ago) and is considering traveling to Andrew P. Hill High School in San Jose, California, to attend graduation ceremonies in June.

Stewart, who is Osage and Cherokee, was born on a reservation in Pawhuska, Oklahoma, but raised in Los Angeles and the San Francisco Bay Area.

Now 76, Stewart splits his time between Boulder City and Coos Bay, Oregon. He has four sons, one daughter, 19 grandchildren and eight great-grandchildren. He also lost a daughter to leukemia when she was 6 years old.