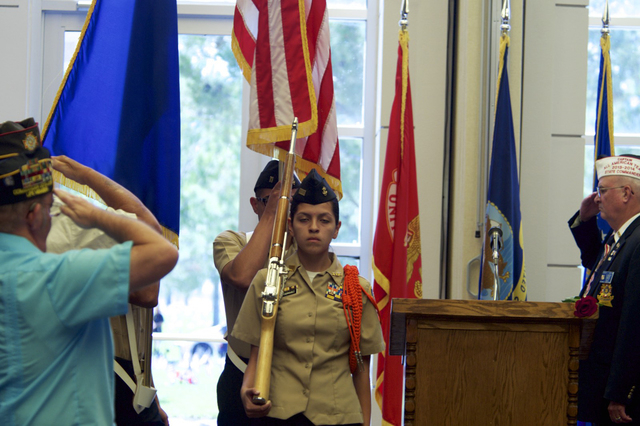 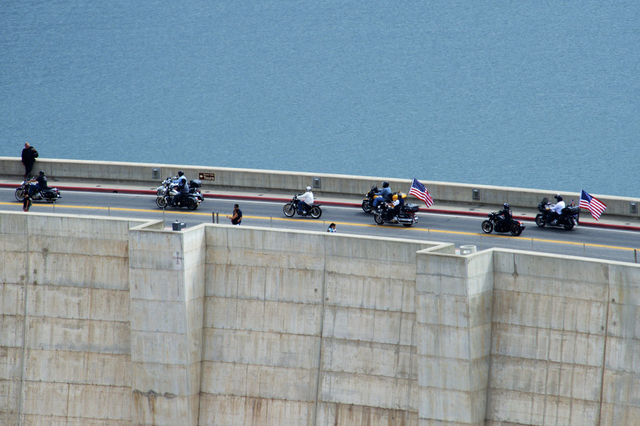 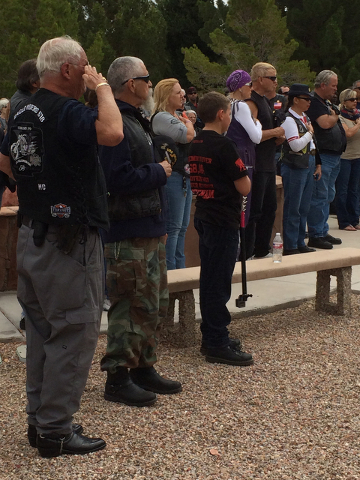 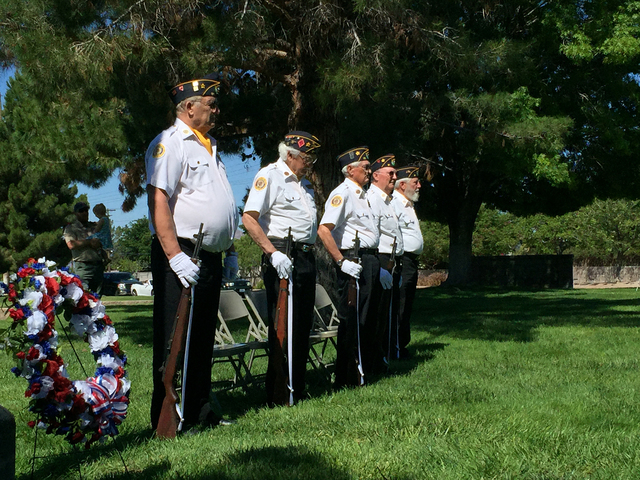 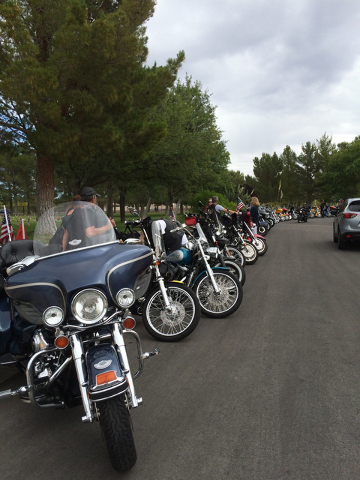 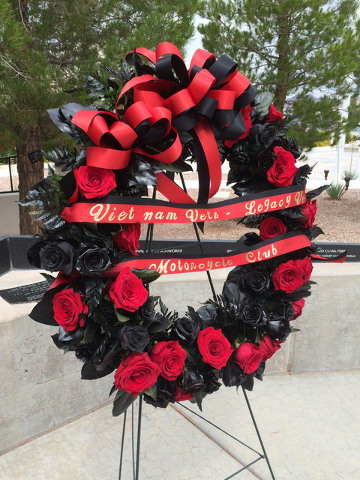 Thousands of people made their way to Boulder City for the Memorial Day weekend to honor the men and women who gave the ultimate sacrifice to protect this country’s freedom.

Memorial services began with a thunderous roar Sunday morning as about 1,800 motorcycles participated in the 23rd annual Flags Over the Dam ride.

“We’re here to honor the brothers who haven’t returned and sacrificed it all,” said the president of the Vietnam Veterans and Legacy Veterans Motorcycle Club who goes by the nickname Arrow. “This gathering is just a small spark in the flame of pride” for those who served.

After traveling across Hoover Dam, the ride ended at the Southern Nevada Veterans Memorial Cemetery where members of the Special Forces Association, Chapter 51 of Las Vegas, and its Ladies Auxiliary officiated at a Memorial Day ceremony that paid tribute to Vietnam veterans and members of the special forces who lost their lives.

Laura Helland, who served in the Army, arrived at the cemetery on her motorcycle as part of the American Legion riders.

Monday’s events began at the Boulder City Cemetery at 9 a.m. with about 100 people were present for the services by American Legion Post 31 of Boulder City.

Linda Graham, president of the post’s women’s auxiliary, gave a brief history of women in the military. Post 31 Cmdr. Greg Hall enlightened the audience on the history of taps, which he said came to be in 1862 from bugler and Union Gen. Daniel Butterfield during the Civil War.

Boulder City Boy Scout Troop No. 7 performed the 13-fold salute of the American flag, and members of Post 31’s Honor Guard followed with a 21-gun salute.

The holiday we know as Memorial Day originated as Decoration Day in 1868, according to the Department of Veterans Affairs. In 1971, Congress declared it a national holiday, and it’s been observed on the last Monday of May ever since.

“If we don’t learn our history, we’re doomed to repeat it. It’s important to know it so we can avoid making the same mistakes two or three generations later,” Hall said. “Our country is a great country. The fact that people go out of their way to come here is indicative of that.”

As the day wore on, droves of people made their way to the Southern Nevada Veterans Memorial Cemetery for the 1 p.m. service. An hour before the service began, the chapel was packed with hundreds of people as hundreds more walked around the cemetery placing flowers on the graves of their loved ones.

John Pallet of Las Vegas brought his four children to the cemetery to place custom “thank-you flags” on some grave stones. Each flag had “Thank You” written on a piece of paper taped to the top of a Popsicle stick.

Pallet, who immigrated to the United States from England in 2001, said he wants his children to understand the importance of those Americans who paid the ultimate sacrifice.

“It’s the chance to remember those who sacrificed for me and my family so that we can live the way that we do,” he said.

UNLV student and Reserve Officers’ Training Corps member Samantha Smith was at the cemetery with her mother to pay their respects. Smith, whose grandfather served in Vietnam, said she plans to join the Air Force after she graduates from college.

“I think this cemetery belongs to everyone,” she said. “You make your own kind of family when you join the armed forces. No matter which branch you go into, that’s your family.”

By 1 p.m., visitors were spilling outside of the chapel to hear the service. According to Bob Garlow of the Veterans of Foreign Wars Post 36 in Boulder City, about 450 volunteers placed more than 26,000 flags on graves at the veterans cemetery for Memorial Day.

Veterans from every war since World War II stood and waved as they were recognized for their service, and the Nevada Opera Theater soloists sang “Songs of the Armed Forces” as the audience clapped along.

Titus, who sits on the House Veterans’ Affairs Committee, said Nevada has more than 230,000 veterans. She said Nevada is very “veteran-centric,” and emphasized the importance of remembering Memorial Day for what it truly is.

“So many people think Memorial Day just means the beginning of summer, so we need to remind them that it’s a day for us to stop and thank those who made the ultimate sacrifice,” she said. “The best way we can do that, in addition to services like this, is to make a commitment to those who are still in the field, and to the veterans who are home.”