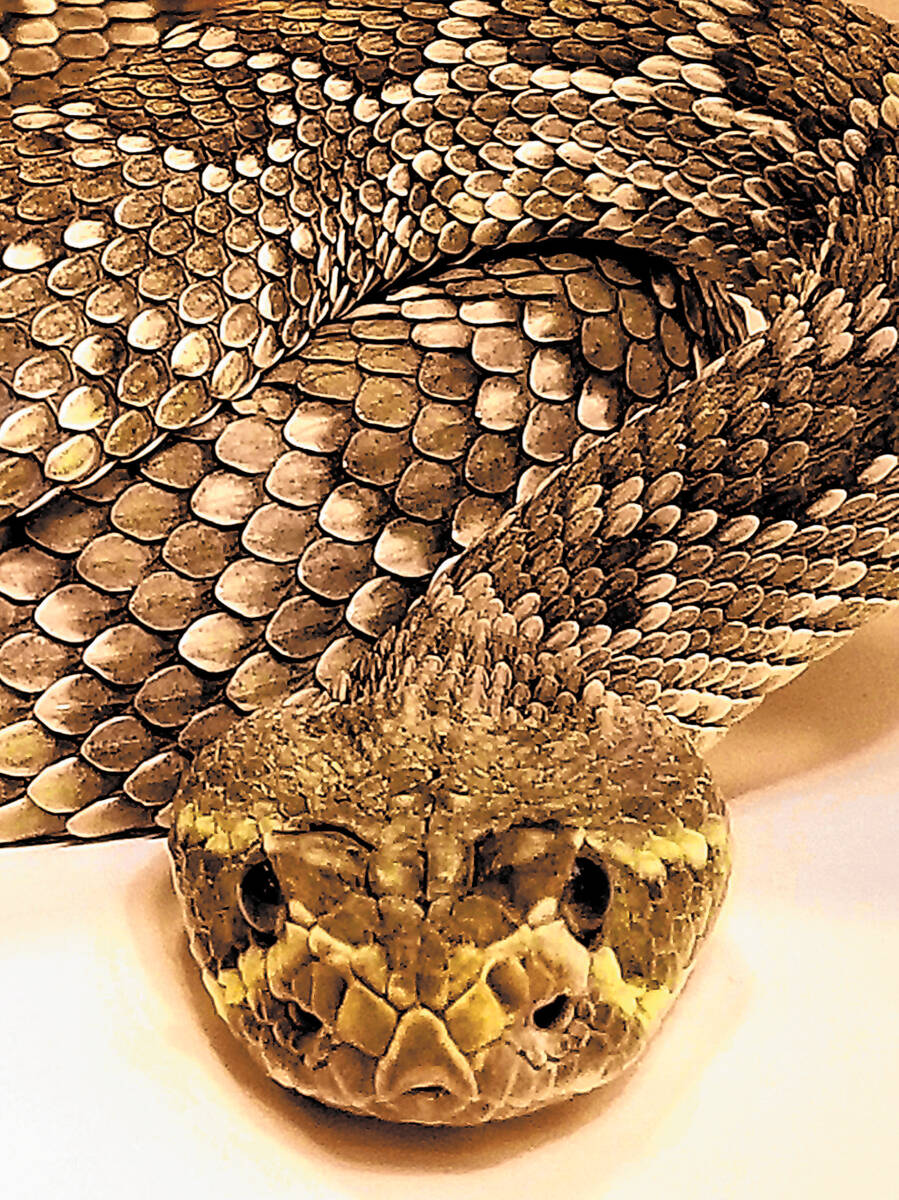 (Boulder City Review file photo) A Mojave green rattlesnake has the most potent venom of any rattlesnake in the Nevada desert.

Boulder City Animal Control Supervisor Ann Inabnitt warns residents of the dangers of these slithering lil’ guys. Residents should be aware of this seasonal spike in snake activity as they come out of hibernation to start feeding on rats, rabbits and smaller critters.

“The minute these rocks warm up and we get a couple of 90-degree days, they come out looking for that warmth. When it gets to 80 degrees, they are going to come out and lay on the rocks. But the rocks are not typically in your backyard; they are in the ridges,” said Inabnitt.

The most common location for snakes in Boulder City is in the ridges in the lakeside region of town. The closer you get to Lake Mead, the more likely you are to run into one.

Inabnitt says she has not had any cases of snake bites this year on pets or humans but she has had to move the occasional reptile.

If you see a snake, call Boulder City Animal Control at 702-293-9283 or dial 911, as a rattlesnake encounter qualifies as a life-threatening emergency.

Outside of calling someone to handle it, the most important thing to do when you see a rattlesnake, especially if it is indoors, is to not lose sight of it, Inabnitt said. Even with permission, officers are not allowed to damage or destroy property to remove a snake.

“Do not lose that rattlesnake. You keep your eyes on it and call the cops. The cops can move a snake, and so can we, so somebody is coming. Do not lose that snake! What we can’t do is turn your house upside down, even with permission,” she said.

There are three main species of snake that can be found in Boulder City: sidewinder, red speckled and Mojave green. Sidewinders, also known as horned rattlesnakes, have not been seen in town recently, according to Inabnitt. They have a weaker venom than most rattlers.

Red speckleds, also known as speckled kingsnakes, are slow-moving snakes that can be found near the lake. These are nonpoisonous snakes that have hemotoxins.

By far, the worst snake to deal with in the area is the Mojave green, a roughly 3-foot-long pit viper that has one of the world’s most potent venoms. Inabnitt says she typically sees these snakes near Interstate 11.

“It is important to know which type of snake you were bitten by when you head to the emergency room,” said Inabnitt.

Identifying a snake is important not only for you but for your pets. Fifteen minutes is the amount of time you have to get your pet to the hospital if they are bitten by a rattlesnake.

“I see a lot of people who take their dogs off-leash in the summer. My advice is always the same, which is to not take your dogs any further out than you can carry them back. Because if your dog gets nailed by a snake, you’re going to carry it back or it’s gonna die,” Inabnitt said.

Boulder City Animal Hospital carries anti-venom, which has starting costs of around $1,000. That’s before any other treatments are done. Avoiding these instances before they even happen is the “only way to go,” says Inabnitt.

“You gotta watch where you are putting your fingers, your toes and where you sit. You’ve got to watch what your kids are doing too, and dogs, they are even worse.”