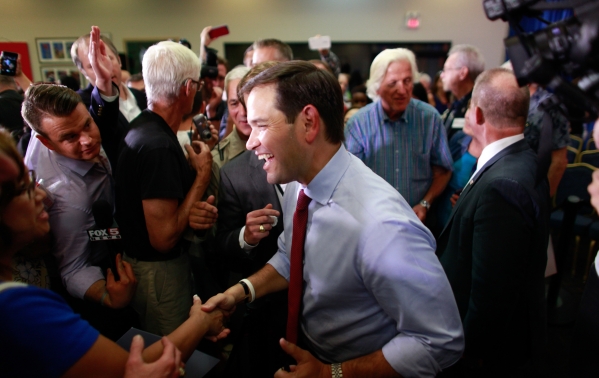 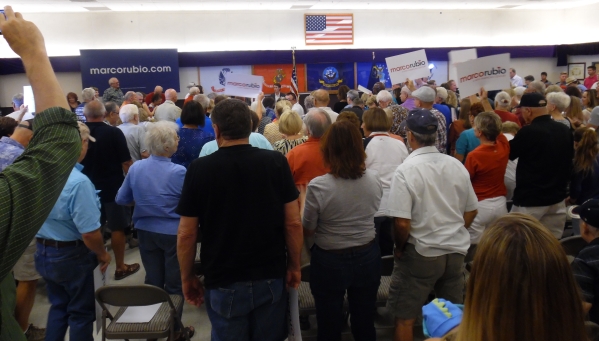 Presidential hopeful and U.S. Sen. Marco Rubio, R-Fla., made an appearance in Boulder City on Saturday morning at the Elks Lodge during his campaign tour.

The rally saw more than 200 people show up in support of the Republican candidate, who spent six years of his childhood in Southern Nevada.

From third grade until high school, Rubio lived in Las Vegas; his dad was a bartender at Sam’s Town and his mom a maid at what was formerly known as Imperial Palace.

Rubio said one of the things he learned while living in Las Vegas was the meaning of the American Dream, and he referred back to that analogy as he plugged his political views during the half-hour speech.

“I was ecstatic that Senator Rubio actually came to Boulder City,” said Gloria Hall, a resident of Boulder City who attended the rally. “This was the first time a presidential candidate has come to our fair city, to my knowledge.”

The senator began the rally by talking about the military and defense spending, saying that our country is on pace to have the oldest and smallest Air Force and Navy in our lifetime. According to Rubio, his promise is different.

“We’re never going to put you in a fair fight,” said Rubio. “You will have better equipment, better training and better intelligence than the other side. You will always be in a superior position, but we can’t keep that promise if we keep cutting the military in this way.”

Although he didn’t directly touch on America’s issues with Kim Jong-un in North Korea, Vladimir Putin in Russia and the military rise of China, the senator did not keep quiet on his thoughts about the three countries.

“Americans need to feel safe,” the presidential hopeful stressed. “You have a lunatic in North Korea with nuclear weapons, a growing Chinese government and a gangster in Moscow.”

Rubio continued to say that after the military takes care of us and comes home, we are going to take care of military members, but that’s a promise that has also been unfulfilled.

The senator said there are good people at the Department of Veterans Affairs, but a lot of them aren’t doing their jobs. Rubio said the benefit should follow the veteran, not the other way around.

Rubio then took to foreign policy, criticizing the current administration for its lack of knowledge in the area.

“We betray our allies and give comfort and encouragement to our adversaries,” Rubio said. “That’s how I would describe our foreign policy today. We have a president that treats the prime minister of Israel with less respect than he does the Ayatollah and Iran.”

The senator continued, saying his policy will be anchored in moral clarity. Rubio also stated that keeping America safe is first and foremost.

“Our allies will be able to rely on us, and our adversaries will know not to test us,” he said with a stern look.

The rally continued with Rubio discussing his takes on taxes, the national debt and Social Security, saying that, if elected, his policies will right the ship.

On taxes, Rubio says he will reform the tax code, making it the simplest and most affordable business tax code in the world.

In reference to America’s national debt at $19 trillion, Rubio said the debt has slowed over the past few years, but is about to take off again.

The senator says his reforms on Social Security and Medicare aren’t unreasonable, that you can ask a person to retire a year later in order to fix the problems.

Rubio then moved onto the Affordable Care Act, saying that “we must repeal and reform Obamacare,” which was met with a thunderous round of applause by the audience.

“It’s a terrible idea that’s hurting our country and our economy,” Rubio said. “Let’s put the people in charge of their own health care.”

Perhaps the most interesting topic that Rubio touched on was his desire to bring back vocational schools in America’s higher education system.

According to Rubio, not everyone is cut out for college, and while most professions require four years of training beyond high school, they don’t require a college degree.

The senator said that America has a shortage of trade workers — from electricians to car technicians — and that “welders make a lot more money than philosophers. We graduate a lot of philosophers and not enough welders.”

Rubio said there’s still an obvious plan to keep four-year colleges, but they need competition and the prices are out of control.

His plan includes giving college credit to individuals who’ve served time in the military or worked in related fields pertaining to the degree they seek.

With the Latino vote quickly becoming the tipping point of election, Rubio did not bring up his stance on immigration, which Hall said was a little disappointing. The senator is trying to become the nation’s first Hispanic president.

Overall, the audience seemed enamored with Rubio as he closed the morning rally.

“I was pleased that there was such a huge crowd showing such great interest in the contest,” Hall said. “I think Marco Rubio is a rising star with a lot of great ideas about the economy, the national debt and reconnecting with the American Dream.”

The next Republican primary debate will be held Oct. 28 at the University of Colorado in Boulder, and will be televised on CNBC in two tiers, with candidates ranking lower in the polls at 6 p.m. and candidates that poll higher in the prime-time debate at 8 p.m.