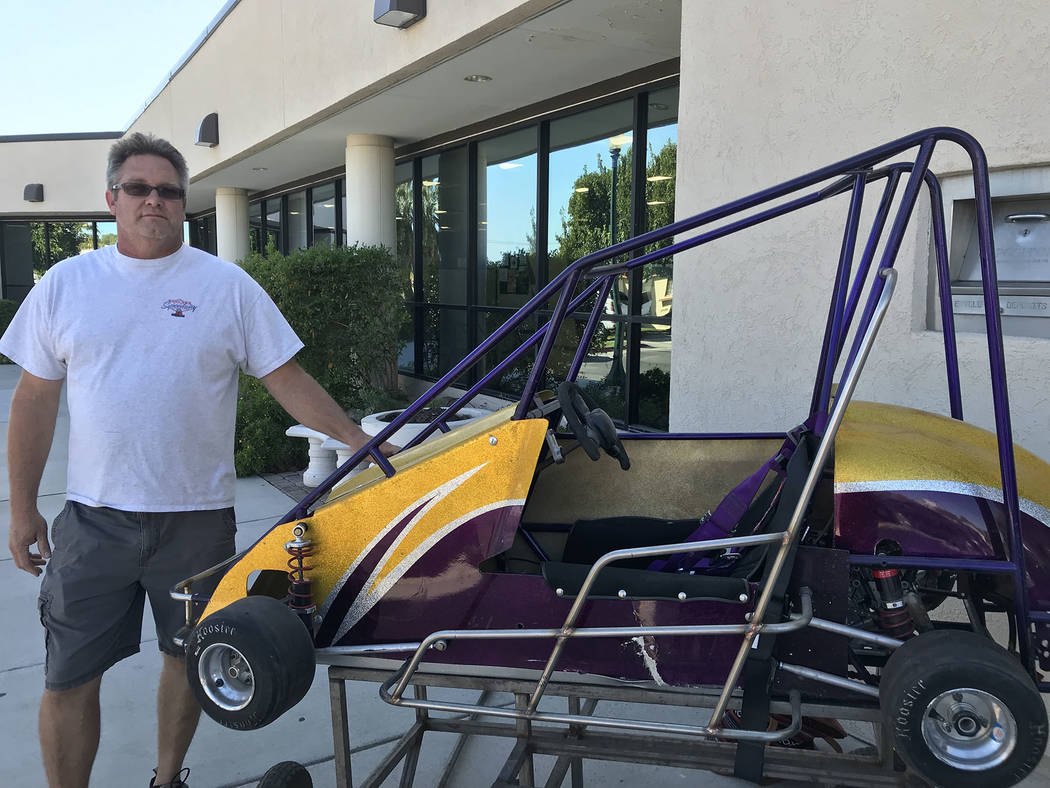 (Hali Bernstein Saylor/Boulder City Review) Bob Martin brought a quarter midget race car to the Boulder Dam Credit Union on Friday, Oct. 4, to show residents what is being used to race on the track on Quail Drive. He was seeking support from area residents to allow racing to continue on the track, which was built for radio-controlled vehicles.

Human-driven cars can now be used at the racing facility on Quail Drive after City Council unanimously approved a lease amendment for it during its meeting Tuesday, Oct. 8.

The race track is leased by R/C Quarter-Scale Association of America and only racing of radio-controlled cars was permitted. Robert Leydecker, president of the association, was interested in amending the lease to allow for quarter-midget cars to be raced there. They were racing on the track but stopped once the city informed them it was not a permitted use.

To use the track for other activities, an interested group would need approval from the special event committee and city attorney. Once approved, it would need to obtain a special use permit through the city’s Parks and Recreation Department. The property would not be subleased to them. Any other amendments to the lease would need to be approved by council.

Councilwoman Tracy Folda said the proposed lease amendment had more accountability and standards for safety issues than the previous version.

“I feel like this is a lot better agreement than what we had before us at the last City Council meeting … . I think this would be very beneficial to Boulder City and the kids who are using it,” she said.

Additionally, any group that uses the property must be a nonprofit organization, there must be property and liability insurance in place at all times and for any activities with human-occupied cars a fire engine, two emergency technicians and an ambulance must be present. The property must also be reviewed and certified to meet the minimum safety standards required by the insurance before being used for any human-occupied vehicle.

“I think this is a good way to move forward and keep more control of the situation and everything on the up and up,” he said.

“The city attorney, Mr. (Brok) Armantrout and all the council members have put hours into this project … . I do think it … establishes the original intent of the property for nonprofits,” said Mayor Kiernan McManus.

McManus said they want the property to be used for the enjoyment of residents and those who live outside of town. Additionally he requested that a review of the association’s finances, schedule of events and proof of insurance be done 120 days before the lease’s renewal date.

“Kids go have a good time,” said McManus after the vote.

Prior to the agenda item, several attendees had voiced their support for the amendment.

The amendment also prohibits the use of aerial vehicles like drones or radio-controlled model airplanes at the track.