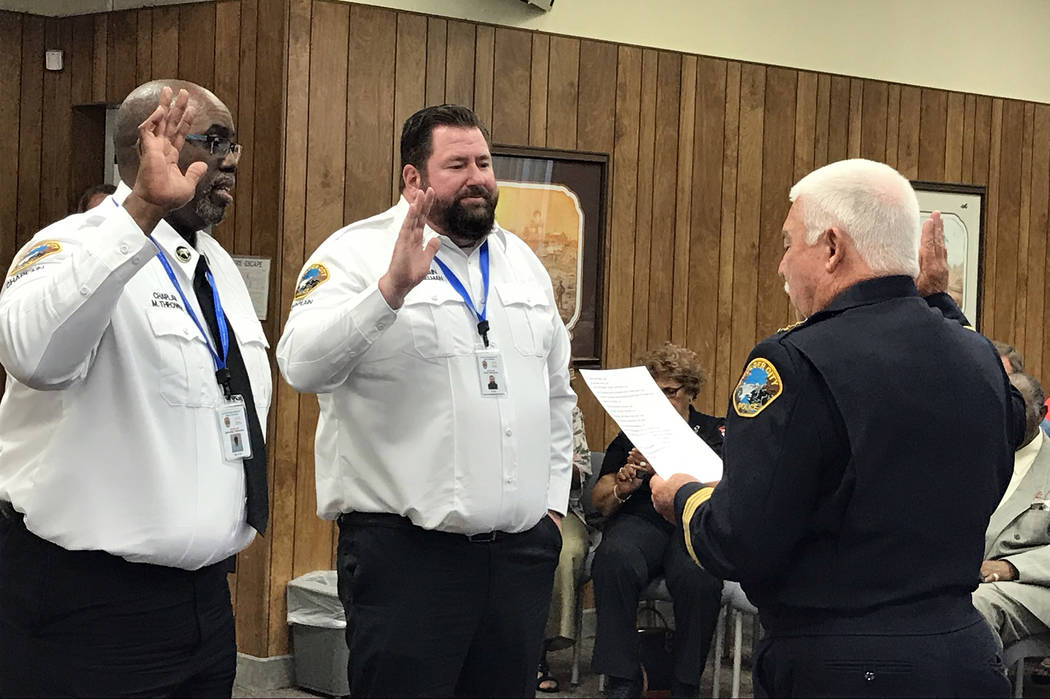 The Boulder City Police Department has resurrected its chaplain program that helps officers, victims and families.

Police Chief Tim Shea said the program has been around for years but had fallen into disrepair and now was a good time to reinstate it with the stress faced by the officers and community members.

Last week, he swore in senior chaplains Michael Thrower and Ryan Michael Creelman to the program. They will assist officers in dealing with victims of trauma or major life events when faith-based assistance is requested.

“It serves both our public as well as officers,” Shea said. “The level of stress our officers encounter is immense. This program gives them someone who can help victims and their family members, as well as the officers who respond to incidents.”

Thrower said his work as a chaplain is a calling, and he wants to add value to the Boulder City Police Department by being someone officers can meet and decompress with confidentially and without judgment.

“In talking with Chief Shea, I saw that there was a need … I just enjoy working with police officers,” he said.

In addition to working with Boulder City, Thrower serves as lead chaplain for the Clark County School District and works with Community Connect and Adopt-A-Cop Nevada.

“The chaplains will be available upon request and on an as-needed basis,” Shea said. “They are already well-trained in trauma response, as they’ve worked in their roles for several years now.

The chaplains are volunteers so this program does not cost the city anything.

At the swearing-in ceremony July 11, Shea also swore in Ruby Perkins as the new police support services manager. She was promoted to that position from her previous one of BCPD communications and records supervisor. Additionally, Lauren Christian was sworn in as a full-time emergency dispatcher. She used to work as a part-time dispatcher.