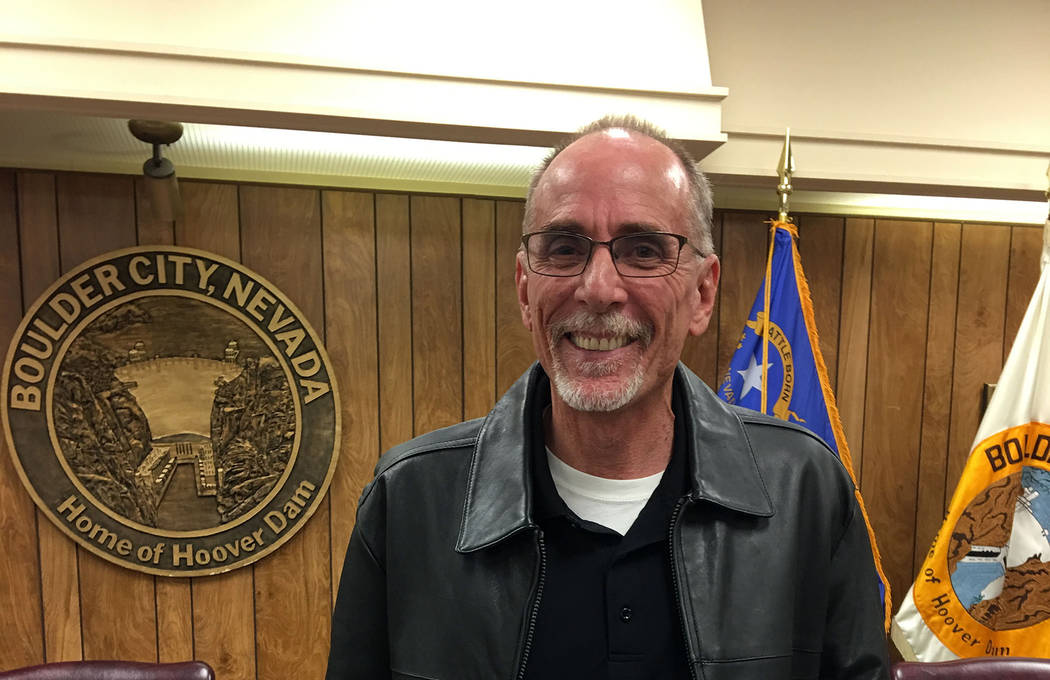 Boulder City Jim Giannosa was recognized by the Planning Commission for his 13 years of service to the organization at the Dec. 19 commission meeting. Giannosa's term expired and he is not seeking reappointment.

Jim Giannosa is stepping down from the Planning Commission after 13 years of dedicated service and having never missed a meeting.

The Dec. 19 meeting was his last after he decided to not sign on for another term.

Now, has his sights set on being part of another city organization.

“I want to get on Parks and Rec(reation) next,” said the longtime resident and community volunteer. “I know they do the Damboree and … parade. Those events define the community. I would really like to be a part of them.”

He said he served because he loves the Boulder City community and wants to do whatever he can to make it better.

Giannosa weighed in on a variety of projects during his tenure including the recent StoryBook Homes subdivision, Boulder Hill Estates.

“StoryBook Homes is going to be nice,” he said. “Randy Schams’ projects are nice. That’s the kind of controlled growth I like to see.”

Another element of growth Giannosa was a part of was the solar field development in the Eldorado Valley.

“It was good at first,” he said. “Now I think we are at a point of saturation.”

Even though he won’t be part of the decision-making process, he believes there is much that can be done to improve the community.

“There are still things that need to be done,” he said. “If there were more funding, there would be a lot more Community Development could do. I’ve always felt that way.”

Before starting on the Planning Commission, he served on the city’s allotment committee. He was appointed to fill a vacancy on the commission, where he has been ever since.

“I appreciate the dedication and commitment shown by Jim for the past 13 years,” said Al Noyola, city manager. “He certainly has been an asset to the community. I thank him and wish him well in his next endeavors.”

“I enjoyed his down-to-earth attitude and how he tried to solve problems,” said Commissioner Cokie Booth, who worked with him for 10 years. “He tried to solve them to benefit the community. I just always felt he was fair.”

Booth said he was also good at putting complicated plans into understandable terms.

“That’s one of the things I liked about him because I’m not a contractor,” she said. “I’m a real estate agent … . He’s always been so easy to work with and had the city’s best interests at heart.”

Giannosa said it will be weird not being on the Planning Commission and he will miss interacting with the other six people on the committee.

“It’s always good to spar with them,” he said.

When not volunteering in the community, Giannosa works full-time as a construction project manager for Boyd Martin Construction. Additionally, he is a roofing contractor and does some handyman work.