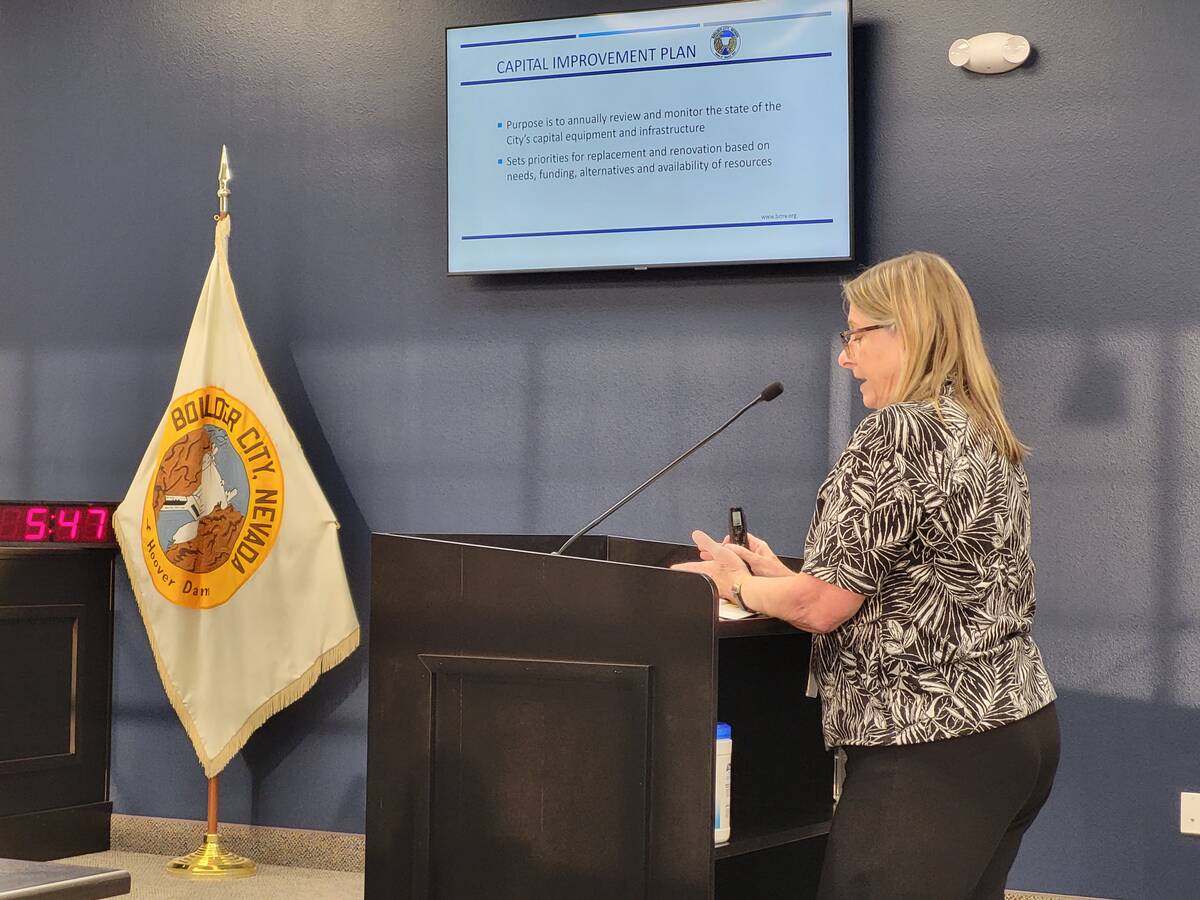 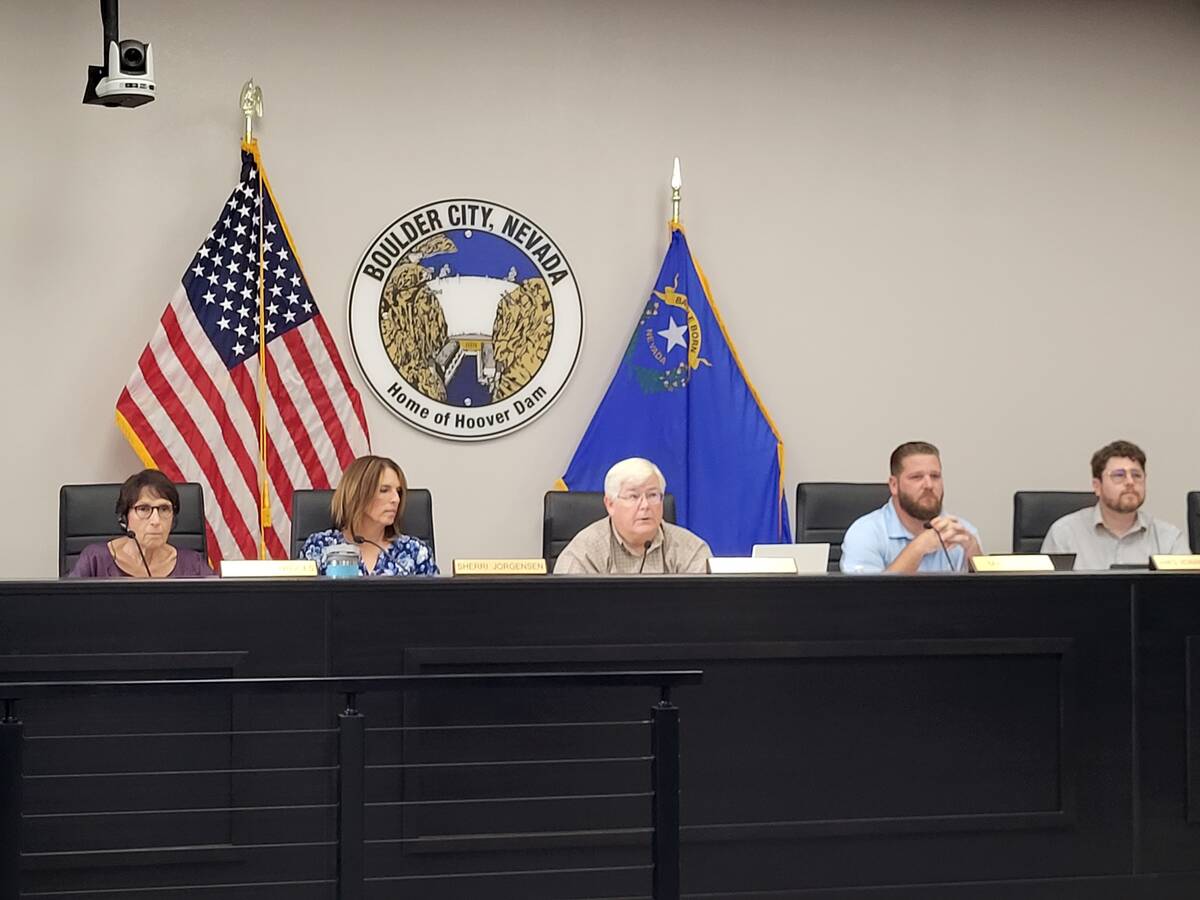 (Mark Credico/Boulder City Review) Members of the City Council listen to a presentation from City Manager Taylour Tedder during their meeting Tuesday, Sept. 27.

The council officially introduced the proposed historic preservation ordinance that was rejected by the Planning Commission in late August.

If approved, the ordinance would establish maintenance standards for all buildings in the historic district, create a Historic Preservation Commission, require approval for any outside changes to historic district buildings and make it a misdemeanor for breaking ordinance rules, with each day the rule is broken counting as a separate offense.

Though this was just an introduction and the members of the council did not comment on the bill itself in the meeting, several public comments discussed the proposed ordinance. Multiple comments defended the proposal, saying that Boulder City is already good at preservation but needs to do better. Several comments supported the idea of preservation, but denounced the methods of enforcement.

Councilman Matt Fox said he disagrees with the ordinance.

“The people that are buying (historic houses) already upkeep them,” he said. “And we don’t need to penalize them and fine them or give them misdemeanors because their yards are a little rough. I just think we’re overstepping.”

Councilwoman Sherri Jorgensen said that she is still gathering information from Boulder City residents before she has a defined stance on this issue.

The plan specifies how funds will be spent on projects to improve the infrastructure, according to the Boulder City website. Pelletier said that the plan differs from the operating budget because it continues over multiple years, whereas the operating budget closes at the end of the year.

Going into the fiscal year of 2023, 64 projects were approved, costing an estimated total of $48.5 million.

The largest project, projected to cost $2 million, will replace the irrigation system at the Boulder City Golf Course in an effort to conserve water. The 2023 fiscal year also has projects such as a municipal court remodel, city facilities broadband upgrade and a dog park.

Manninen read out 24 projects slated for the 2024 fiscal year, which will be up for tentative approval by the council in November. Some of those projects include traffic intersection improvements and fire department training facilities.

Notably, the fire department training tower project depends on funding from the sale of Tract 350, which hasn’t happened yet; the backup plan is for $7 million from the capital improvement plan that will be voted upon in November.

“We have a number of people on that committee that have a lot of experience,” said McManus, “and no input is referenced in this presentation from the Utility Advisory Committee. They’ve been in operation now for a couple of years. I know that I’ve heard at their meetings that they do have recommendations. They do have ideas on this.”

McManus also criticized the plan for planning and budgeting projects without completing them.

Jorgensen said that she has confidence in the plan’s ability to complete its future projects.

The council voted 4-1 in favor of amending the master city’s plan use designation for 74 acres from open lands and parks and recreation to the community commercial designation. This new label allows the proposed recreational vehicle park and cabin renting facility to move forward with leasing negotiations for the newly designated land.

“I think it’s a win-win,” said Fox. “Bring people in without expanding the housing market or anything like that.”

Councilman James Howard Adams said that the RV park and cabin rental facility itself is a good fit for Boulder City, but was concerned that the new designation could be bad for the land if something else were to take the RV park’s place. He ultimately voted in support of the master plan land use amendment.

“I want us to continue having these conversations,” said Adams, “so that we can reach the decision of what is best for Boulder City.”

The only vote against the change was from McManus, whose main concern is how close the park will be to the public golf course in the same area.

“My biggest concern is that we’re tying a private project into a public facility,” said McManus. “And that’s a facility that we don’t know what the future of it’s going to be.”

McManus and other members of the council took issue with the lease presented for the facility, which reportedly was written to last 99 years in the initial proposal.

“To keep this under lease for a century to a single entity is just bad public policy,” said McManus.

Councilwoman Claudia Bridges and Jorgensen ensured that the lease wasn’t set in stone with the passing of this motion. Lease negotiations are the next step in the council’s process of approving this project.