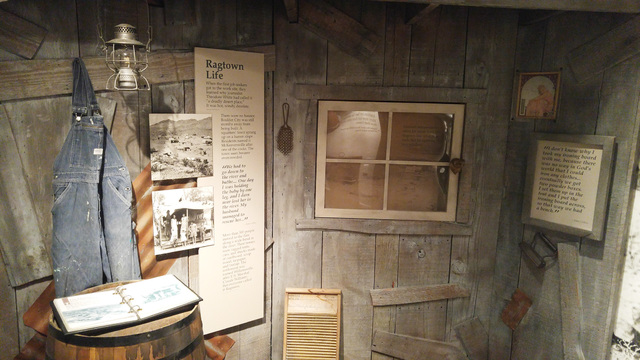 File photo The Boulder City/Hoover Dam Museum tells the story of the construction of the dam, as well as the birth of Boulder City, with artifacts, audio recordings and interactive exhibits.

The future of the Boulder City Museum and Historical Association continues to get brighter. That was the message presented at the board of directors’ annual meeting Tuesday night at the Boulder Dam Hotel.

“This past year everything has been so smooth,” said Chairman Jim Holland after describing some of the organization’s past financial challenges.

Holland said the nonprofit continues to pay down the group’s debt, bringing it down to “residential loan numbers” and a “manageable level.” Additionally, staff and volunteers have worked to fix the exterior of the Boulder Dam Hotel, it’s largest asset, and begun new programs to raise awareness of the museum.

‘We are the cultural and physical hub of Boulder City,” said Leslie Woodbury, the association’s museum development officer.

To continue in that capacity requires dedication from staff, board members and the community she said, recognizing their achievements and describing donations and grants obtained in the past year.

The capital campaign, which started in 2010, also includes obtaining funds and donations to repair and stabilize the 84-year-old hotel. Since it started, the campaign has raised $1.3 million.

“To date, nearly $600,000 has been invested in the building by upgrading its HVAC, plumbing and electrical components; repairing the windows, masonry, gutters and downspouts, painting the entire exterior, replacing the shingles, and resurfacing the flat roof,” she wrote in her report.

Woodbury also spoke about future needs, including upgrades to the electrical system, which are expected to start later this year, and the need to renovate six hotel rooms. To help cut costs of the renovations, the association is launching the Great Hotel Flip Room Design Contest, which seeks participants to redecorate the property’s six rooms with king-sized beds.

Facilities manager Isaac DeWolf spoke about recently completed projects, which included adding soundproofing on the guest room doors, replacing exhaust fans in the bathrooms, replacing headboards for the queen-sized beds, and installing lighting for the sign on the roof.

In 2017, he anticipates spending about $37,000 for projects such as new condensation pumps for the air-conditioning system, removing the popcorn ceiling in the lobby, updating the lobby bathrooms, as well as major repairs to the electrical system.

Shirl Naegle, the museum collection manager, spoke about his work and the many compliments he gets daily on the museum’s exhibits.

He reported that visitation and admission fees for the past year remained flat, but that the number of children’s field trips had increased by 9 percent and that sales in the gift shop had gone up 10 percent.

Work continues on digitizing the archives and Jeannie Rutherford volunteered and completed a reorganization of the museum’s entire textile collection, he said.

According to Roger Shoaff, general manager of the hotel, the “local” experience is a growing trend in hospitality and the hotel’s location and the recently launched audio walking tour of downtown is helping boost its occupancy level.

Since the debut of the tour in August and a link on their website, bookings at the property have gone up 6 to 8 percent, he said, noting that is about 10 percent above the industry average and without any real promotion.

He also said that guest reviews continue to be high and that the hotel has ranked No. 1 in Boulder City for the past eight years on TripAdvisor. Improvements to the facility should raise the ratings received on comfort and value, which would allow them to increase room rates.

All of the association’s financial reports for the most recent fiscal year are available on its website, www.bchma.org.