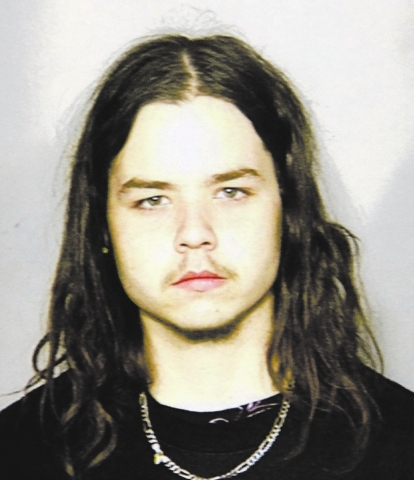 The co-conspirator in two 2010 murders, one where a young mother’s body was dumped near city limits, has been sentenced to life in prison with the possibility of parole. Clark County District Court Judge Carolyn Ellsworth on Sept. 11 sentenced 22-year-old Las Vegas resident Richard Freeman Jr. for his role in a January 2010 crime spree.

Freeman’s accomplice, Las Vegas resident Gregory Hover, was sentenced to death in May.

On Jan. 14, 2010, Boulder City Police found 21-year-old Prisma Contreras’ body inside of her burned-out vehicle on State Route 165, which leads to Nelson. After being kidnapped from the Las Vegas parking lot of Hooters Casino, where she worked, Contreras was raped, strangled and stabbed to death. Her body and vehicle were then set on fire.

It was a “brutal, long-lasting” murder, Chief Deputy District Attorney Dave Stanton said in June. Ten days after Contreras’ body was found, on Jan. 24, 2010, Hover, a process server, visited the Las Vegas home of Julio and Roberta Romero, where he attempted to serve legal papers to a friend he hadn’t seen in years.

Hover and Freeman then returned to rob the elderly couple in the early morning hours of Jan. 25. Hover shot 64-year-old Julio Romero in the head, killing him, before he forced Roberta Romero into a closet, where he shot her in the face. Hover was convicted of a total of 31 counts in the case, including two counts of first degree murder. Freeman pled guilty to two counts of first degree murder in April, thus avoiding the death penalty. Stanton said Freeman was given a plea deal because he didn’t actually commit the murders. “(Freeman) was as guilty (as Hover), but there was no evidence to suggest he actually took their lives,” Stanton said. “And there’s a distinction.”

Standing in the courtroom Wednesday, Freeman spoke softly as he offered his apologies to the victims’ families, the court and his own family, the Review-Journal reported.

“I do understand the gravity of the situation,” he said.

He said his drug use contributed to his behavior but does not excuse it.

Freeman asked the judge for a “glimmer of hope” that he might someday be released from prison.

In sentencing Freeman, Ellsworth expressed her belief that he was influenced by the older Hover, who was 39 at the time of the murders, the Review-Journal reported. Freeman must serve at least 56 years before his parole is considered.

“I know he’s never getting out, no matter what,” Denise Espitia, Contreras’ sister, told the Review-Journal outside the courtroom.

Not much is known about the relationship between Hover and Freeman, other than Freeman was initially friends with Hover’s son, and the two met while living in the same apartment complex, Stanton said. Though there is some evidence, in comments Hover made to his cellmate, to suggest the killings were racially motivated, Stanton said the motive is unknown.

“How that friendship sparked to go to the extremes that it did, I think the only answer comes from those two gentlemen,” he said.