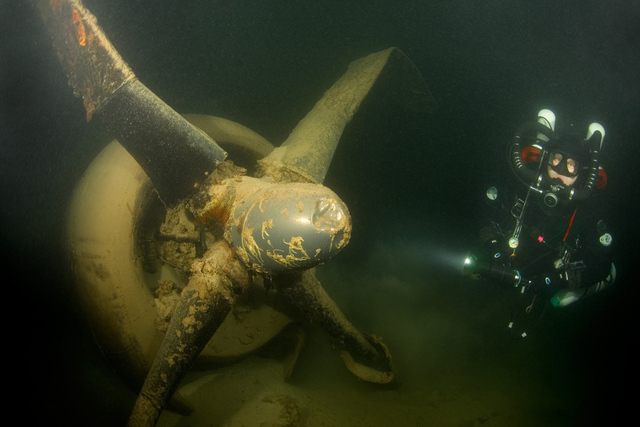 With any large body of water comes questions of what truly lies beneath its surface, and that applies to Lake Mead, too.

Different versions of these tales have been told over the decades, but local lore will tell you the floor of the lake is covered in cement-booted bodies from the mob days, catfish 17-feet across, unusable poker chips and even an entire town.

Giant catfish at the bottom of Lake Mead or at the base of Hoover Dam aren’t just Nevada-exclusive. According to Snopes.com, the legend rings back as far as people have gone fishing in the West. Sometimes the stories say the catfish swallowed a diver whole, sometimes they capsized whole boats.

True, catfish can get pretty huge, such as one caught by an Italian fisherman in February weighing almost 300 pounds and almost 8 feet long, but most of the local “Big Fish” tales will be a little more vague, or passed on from a local fisherman looking to scare a few kids.

Some have even been told of stray sharks making their way up to Lake Mead and attacking boaters in the 1970s or ’80s, but just so we’re square on that one, it’s never happened.

As for the entire town, this is based in fact, although no one was living in it when the lake started to fill after the Hoover Dam’s construction was completed in 1935. History turns to myth when the stories say the town is under or at the base of the dam, or that the dam was built on homes that were still being lived in.

St. Thomas lies in the northern tip of Lake Mead Recreational Area, just ahead of Echo Bay in Muddy River. The town was founded in 1865 by Mormon settlers sent by Brigham Young. At its peak, it had 2,000 people and no jail or town government.

The residents knew in 1920 their town would be coming to an end when scouting members of the Bureau of Reclamation came to visit. On June 11, 1938, the town officially ceased to exist. As water creeped into the little town, the post office became the last building to close and everyone remaining left. Today, because of lowering water levels, remnants of the town can be seen at the end of St. Thomas Road.

Whatever else remains on the lake’s floor, you can count on one big thing: a massive, World War II-era bomber — a B-29 Superfortress, specifically. In April, Scuba Training and Technology based out of Lake Havasu City, Ariz., was given permission by National Park Service to offer guided tours to the wreckage.

The plane was one of the last of its kind built for the war, and was delivered to the Army 11 days after it ended. The plane crashed into the lake at 230 mph on July 21, 1948, and was lost until 2001. All five people on board survived.

As with St. Thomas, the B-29 also rests toward the northern end of the lake, under 110 feet of water in the Overton Arm.

Maybe someone on a dive visiting the plane will spot one of those giant catfish while they’re down there.

Ever hear of anything weird in Lake Mead? Contact Kristen DeSilva at 702-477-3895 or kdesilva@reviewjournal.com. Find her on Twitter: @kristendesilva