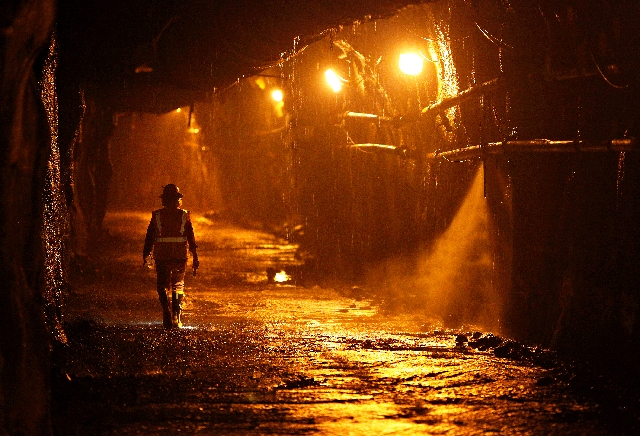 After setbacks, delays and even a death, there is something to crow about at the site of the Southern Nevada Water Authority’s new water intake at Lake Mead.

Workers have finished drilling and blasting a connector tunnel 400 feet underground that will link the valley’s two existing straws to the third one under construction.

It took three years and more than $52 million to carve the half-mile long connector through fractured rock and seeping water from the nearby lake.

“This is a major milestone for us,” said Ericka Moonin, project manager for the water authority. “It’s a critical part of the project, and it’s a critical project for the community.”

The Las Vegas Valley draws 90 percent of its drinking water from Lake Mead. The $817 million third intake will keep that water flowing even if the lake shrinks enough to shut down one of the community’s existing intake pipes.

The connector tunnel will tie it all together, but building it hasn’t been easy.

Conditions at the site deep beneath the ground near Lake Mead are dark and muggy with a 100 percent chance of rain. Water drips down from the ceiling and sprays from a few holes in the walls.

Through the wettest stretch of tunnel, an ankle-deep stream flows down toward whirring pumps that keep the place from filling completely.

Joseph Savage is project manager for Renda Pacific, the Texas-based general contractor for the connector tunnel.

He said officials expected to find water down there, but not this much. The “high groundwater flow” and unstable rock delayed completion of the tunnel by 18 months and increased costs by $5 million and counting.

That’s the thing with underground construction, Savage said. “You just never know what you’re going to get.”

The connector tunnel was excavated the old-fashioned way: about 10 feet at a time, with hard-rock drills and explosives and heavy equipment mucking out debris.

Renda Pacific started the work in late 2009. Crews punched through to the water authority’s existing intake system in March and wrapped up all major excavation work last month.

All told, Renda Pacific hauled almost 73,000 cubic yards of rock out of the ground, enough to form a pyramid slightly larger than the Luxor.

Workers are cleaning up and putting the finishing touches on the rough-hewn tunnel, which is flat on the bottom and rounded at the top, like a horseshoe 14 feet wide and 16 feet high.

Wet conditions at the site are “especially harsh on people and equipment,” Savage said. “You’re just working in the rain constantly. These guys earn their money, no doubt about it.”

Right now, the water is pouring in at about 1,500 gallons per minute, fast enough to fill a standard 50-gallon bathtub in two seconds.

The volume of the water rises and falls with the level in Lake Mead. The higher the lake is, the faster the tunnel floods.

The water seeping in is loaded with enough calcium carbonate to form small stalactites on the walls.

Pumps at the bottom of the tunnel’s 450-foot vertical access shaft keep the flow at bay, sending the unwanted water to the surface to be cleaned up and released into the lake.

All the moisture has wreaked havoc on the lighting system strung through the tunnel. In some places, workers had to use headlamps and the lights on their drill rigs to see what they were doing.

The company hired to design and build the intake, Vegas Tunnel Constructors, spent weeks trying to stabilize the fault, but the area flooded twice more, forcing a change order that added $39.5 million to the project and delayed its completion date by 593 days to summer 2014.

Then last June, Thomas Albert Turner, a 44-year-old worker with Vegas Tunnel Constructors, was killed in a construction accident in the third intake tunnel 600 feet underground.

Although excavation is finished on the connector tunnel, the Renda Pacific crew has one more weighty task to perform. Within the next few months, a steel pipe 20 feet long and 16 feet in diameter must be lowered down the access shaft and cemented in place at the bottom.

The pipe weighs 70,000 pounds and will have to be maneuvered by a crane down an opening just 10 feet wider than it is.

“That’s what we like,” he said. “They left us with something challenging at the end.”