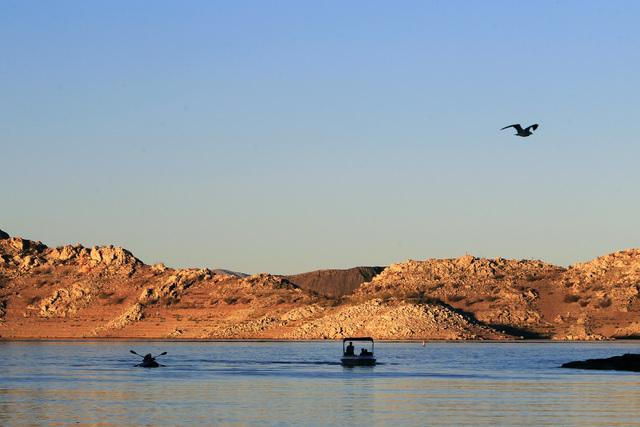 Lake Mead’s water level is the highest it’s been since last May. Still, officials are reluctant to embrace the good news for too long.

The Bureau of Reclamation’s 24-month study predicts the lake will dip to 1,077 feet by January 2016, and the National Park Service is prepared to make the necessary adjustments.

“If they project we’re going to drop 10 feet, then the Park Service can determine if we need to extend our launch ramps,” said Lake Mead spokeswoman Christie Vanover. “We anticipate that we’ll hit that point again based on projections.”

According to Rose Davis, spokeswoman for the Bureau, Lake Mead is still expecting an 8.23 million-acre release by April once the runoff is finished. Though minimal, she said the gain in elevation is still encouraging news.

“We’re happy to see it. The snow came, but it’s been warm in the West, so our snowpack is dropping quickly,” Davis said.

The lake is currently at 41 percent capacity and has gained 8 feet since the middle of last summer. Vanover said it’s typical for the elevation to increase during the winter months when the snowpack trickles down from the Rocky Mountains. However, it will level out once summer arrives.

That trend is part of the lake’s history, and the Bureau’s numbers have proven the trend to be mostly true.

There have been nine years where the lake gained at least 20 feet in elevation from January through December, most recently in 2011 where it jumped from 1,091 feet to 1,134.

Lake Mead has also had its share of tumultuous losses. Six times the lake has dropped at least 20 feet in a year’s span; the most recent occurrence in 2014 when it lost 20 feet during the year.

The lake has been plagued by drought for the past few years, and its elevation has dropped 46 feet since 2012.

“It shows that our climate is ever-evolving,” Vanover said. “Some years we do have a lot of snowpack, and sometimes we don’t.”

Davis echoed the sentiment that climate change has played a pivotal role in the amount of snowpack the lake receives.

“We’re working with Mother Nature who’s calling the shots … and climate change may exacerbate the changes,” she said. “If the temperatures become warmer on the landscape, that means plants get thirstier. That affects groundwater supply coming off the mountains. If the ground is drier, it will absorb more (water) and we’ll get less runoff.”

Vanover said drought conditions are expected to continue, and the Park Service is ready to deal with the repercussions.

She added that the Park Service is expecting to spend about $5 million this summer to extend launch ramps. All but one ramp had to be extended last year, she said, and the Park Service was forced to install temporary pipe matting and concrete planks because the lake was losing so much water.

The Park Service also is contemplating raising its entry fees, which would help pay for improvements to the recreation area. Vanover said Lake Mead is currently one of the lowest-priced parks within the park system, and multiple parks across the country are raising their fees to coincide with new rates enacted by the National Park Service.

Though a full lake is beneficial for water supply, Vanover said more water isn’t advantageous from a recreational standpoint.

“When people see the mineral line, they see that’s the high-water mark. We don’t want to be at the high-water mark,” she said. “Being a full lake is not ideal for recreation. If it’s done in smaller increments, it’s much more manageable.”

Even in 1983 when the lake was at 1,225 feet and the spillways overflowed, the Park Service looked at it as a bit of a negative when it came to recreation, because coves and islands were lost as the elevation rose.

“Being that high is too high,” Vanover said.

But Lake Mead is no stranger to oscillating water levels. Shortly after the lake filled, its elevation climbed 73 feet from January through December in 1938. The lake gained a combined 80 feet in 1962 and 1965. However, those two years of surplus were sandwiched between the two worst years in Lake Mead’s history, though drought was not the culprit.

The lake was at 1,190 feet by January 1963, but fell to 1,088 by January 1965; a decline of more than 100 feet. The decrease in elevation, however, was because a portion of Lake Mead’s water was redistributed to form the new Lake Powell.

With droughtlike conditions expected to continue, the Park Service doesn’t see the lake reaching 1,100 feet anytime soon. Still, Vanover said there is plenty of lake to enjoy, and its purpose of providing water to neighboring states is fully intact.