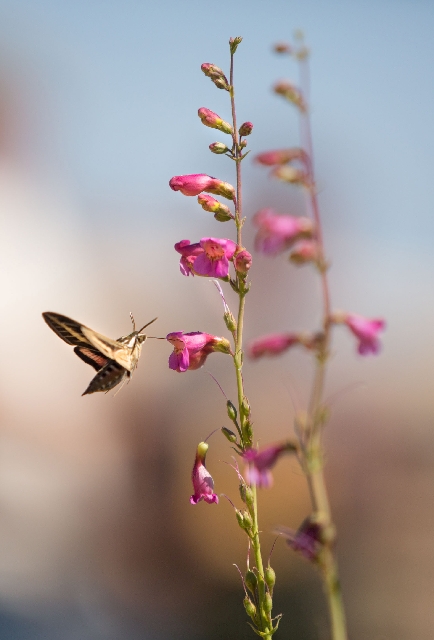 On a day dedicated to green living, Lake Mead National Recreation Area decided to show off its roots.

National Park Service personnel and their partners cut the ribbon — or in this case, a garland made of desert willow branches — on Lake Mead’s new and improved native plant nursery.

The nursery in the hills southwest of Boulder Beach has been there for 20 years, but it just underwent $860,000 in improvements, including construction of a new solar-powered building that houses the facility’s all-important collection of native seeds.

It also got a new name: Song Dog Nursery, which is a reference to the coyote and the role it plays in planting mesquite trees by eating and, um, depositing mesquite beans across the desert.

The nursery produces more than 40,000 genetically native plants each year for National Park Service use and for other federal, state and local restoration projects throughout the region.

It can take hundreds of years for native plants to repopulate an area after a wildfire, construction activity or some other disturbance, and that is only if non-native species don’t fill the void first.

“Without our help, the desert is very slow to recover,” Lake Mead Superintendent Bill Dickinson said.

The nursery grows everything from cactus to cottonwood trees, native grasses to wetland plants, which soak their roots in 300-gallon plastic tubs full of water. All of the plants are raised from seeds or cuttings.

“Everything we grow here needs to be collected from the field to maintain the native genetics,” said Alice Newton, who used to run the nursery and now serves as vegetation manager for the 1.5 million-acre recreation area. “Native plant seed is not available every year. It may not be available at all.”

Hence the nursery’s most important new feature: a heavily insulated room where buckets of seeds, some dating back more than 20 years, are stored behind two sets of doors in a carefully controlled environment.

Newton said the temperature in the store room is kept at 40 to 42 degrees Fahrenheit, cool enough to keep the seeds dormant without freezing them.

As it turns out, growing native plants is not as simple as putting some seeds in a pot and adding water and sunshine. Nursery staff members are constantly experimenting with their limited stock to try to reproduce just the right conditions for germination.

“These seeds have their own strategies,” Newton said. “We’ve got to figure them out.”

Oddly, one of the hardest plants to grow in a nursery setting is one of the Mojave’s most prevalent: creosote. Newton said the ubiquitous bush is prone to a fungus that wipes it out when it’s small.

Other recent improvements at the nursery include new concrete growing pads to keep the potted plants from rooting themselves into the ground and backup water and power supplies to keep the seedlings from cooking in the greenhouses if the utilities go out.

“Losing power or water out here is not a minor inconvenience for us. It’s a big hairy deal,” Newton said.

Song Dog Nursery isn’t open to the public, but its stock could be available for purchase some day.

Newton said the facility is not part of the National Park Service budget for Lake Mead so it survives on grant money, donations and help from volunteers. One way to help keep the operation afloat could be through the sale of native plants to the public, although there are a lot of details to work out before such a sale can take place, Newton said.

In the meantime, participants in the ceremony were encouraged to do what they could for native plants. Each walked away from the event with an envelope filled with brittle bush seeds. Natives, of course.