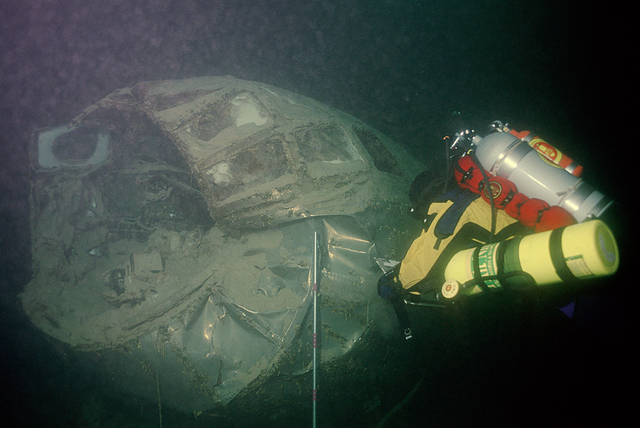 The B-29 Superfortress bomber at the bottom of Lake Mead will be studied even more as the National Park Service allows two business opportunities to operate guided scuba diving tours of the doomed aircraft.

The plane, which crashed into Lake Mead on July 21, 1948, was the same type of aircraft used to drop the atomic bombs over Japan during World War II, according to Dave Conlin, chief of the Park Service’s Submerged Resources Center.

The four-engine bomber was originally intended to bomb German targets during the war, but it was used more in the Pacific, most notably during the bombing of Hiroshima and Nagasaki, Japan, , Conlin said.

After the war was over, the B-29 was used as a developmental instrument for early Cold War technology. The same B-29 that lies nestled in the waters of the Overton Arm was no exception. According to Conlin, that plane was evaluating a guidance system for intercontinental ballistic missiles, a system known as the “Suntracker.” It also measured the change in light transmissivity in the atmosphere.

The pilot, 26-year old Robert Madison, a veteran of the Army Air Corps during World War II, was flying over Lake Mead when the reflecting light coming off the water caused him to misjudge its height, Conlin said. The plane crashed and lost three of its four engines, while the fourth one burst into flames. Madison managed to get the plane back into the air before landing it back into the lake.

He and the other four members on board survived the crash.

In 2003, Park Service archaeologists mapped and documented the wreck for management and educational purposes. The area has since been closed to diving to protect the bomber, which is on the National Register of Historic Places.

The new diving opportunity allows for the two-year commercial use of authorized services of scuba dive guiding, limited to 100 client dives during each 12-month period of the permit, according to the Park Service. It also includes unlimited scuba instruction and scuba charter for other locations at Lake Mead National Recreation Area.

Conlin, who has guided scuba dives to the B-29 site in the past, said the recent allowance of more dives is not related to the dropping lake level. When the plane crashed in 1948, Lake Mead was at 1,190 feet, about 100 feet more than today’s elevation, according to the Bureau of Reclamation.

“It doesn’t have much to do with the dropping lake level. We just want to provide a recreational opportunity,” Conlin said.

He said the Park Service had been planning these dives for the past couple of years as it revamped and ironed out the details for permit arrangements.

“It’s a wonderful little story and it’s an important part of Nevada history,” he said. “It’s an artifact of the early Cold War, and it’s preserved in a National Park.”

Permits will be issued following a selection process based on resource protection, ability to operate safely and the ability to interact effectively with National Park Service staff. Applications can be downloaded at www.nps.gov/lake/parknews/b-29-permit.htm. All applications must be received no later than 4 p.m. Jan. 23.