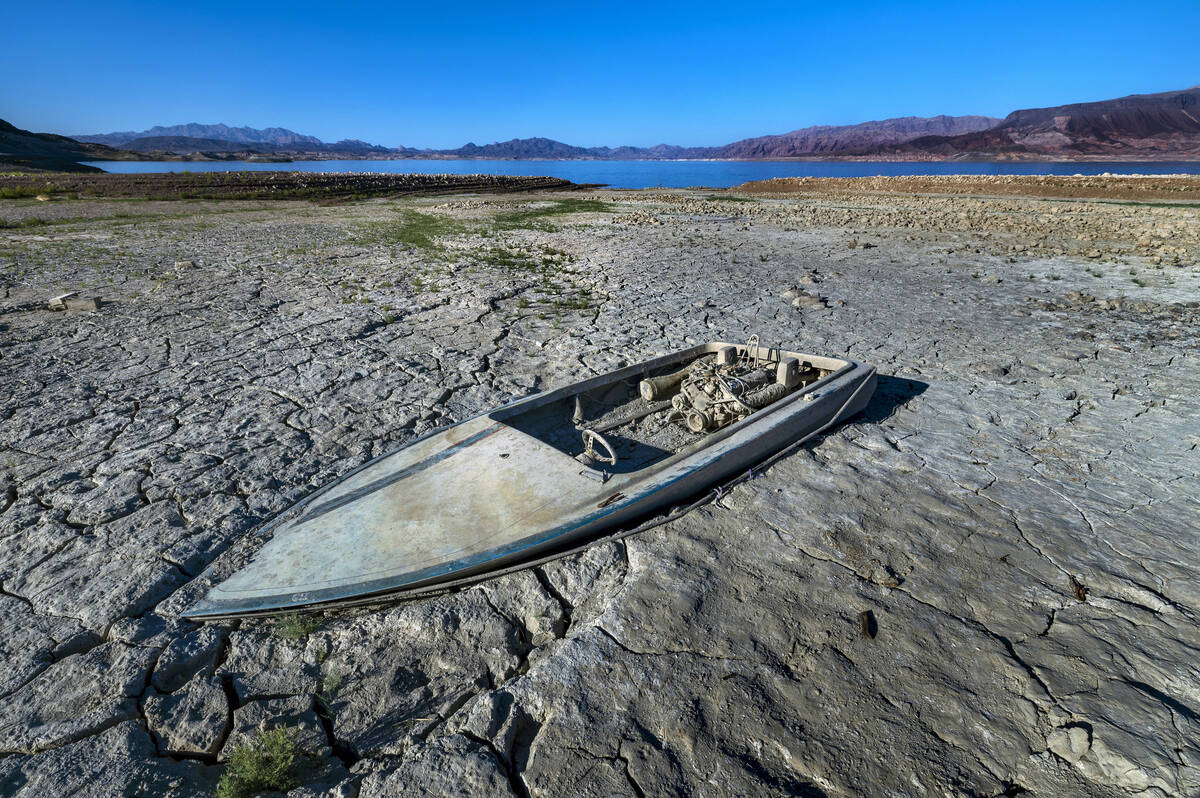 (L.E. Baskow/Las Vegas Review-Journal) Another sunken boat is revealed as the water level continues to decline near Boulder Harbor at the Lake Mead National Recreation Area, as seen Wednesday, June 15, 2022.

Water shortages and demand on the Colorado River Basin will require reductions in water use of 2 million to 4 million acre-feet in 2023 to preserve “critical levels” at Lake Mead and Lake Powell, Bureau of Reclamation Commissioner Camille Calimlim Touton told the Senate Committee on Energy and Natural Resources in testimony recently.

If entities that use the water cannot reach agreement within 60 days on a plan to reduce consumption, the Interior Department could mandate cutbacks and would do so, Touton said.

Lake Mead has dropped to an all-time low of 28 percent of capacity. The water level was 1,044.01 feet as of 1:30 p.m. Wednesday, a decline of nearly 6 feet in the past month. A year ago the lake was 1,070.5 feet (above sea level). The bureau’s latest 24-month outlook released earlier this month said it is forecasting the “most probable” lake level will be 1,014.86 feet by September 2023, about 9 feet lower than projections made just one month ago.

Should Lake Mead fall below its “dead pool” level of 895 feet, Hoover Dam would be unable to release water downriver to California, Arizona and Mexico.

“We are 150 feet from 25 million Americans losing access to the Colorado River, and the rate of decline is accelerating,” John Entsminger, general manager of the Southern Nevada Water Authority, told the committee.

Touton said climate change — including hotter temperatures leading to less snowfall, drier soil and other conditions — have created declines in water systems never seen before. She said the new reality applies to every river basin the agency manages, but the Colorado River is the largest and most urgent focus.

Last August, the federal government declared a shortage on the Colorado River for the first time, triggering substantial cutbacks in water deliveries to Arizona, Nevada and Mexico. Some Arizona farmers have left some fields dry and unplanted, and have turned to more groundwater pumping.

Southern California has not yet faced reductions, but it’s likely that will change as reservoirs keep dropping.

The lake is the largest man-made reservoir in the country, and in the early 1980s held an estimated 28 million acre feet of water. Water came over the top of Hoover Dam in spring 1983. Over the past two decades, the lake has fallen steadily as sustained drought, increased water demand and over-allocation of water have led to an endangered future.

“There is so much to this that is unprecedented,” Touton, a Nevada native, told lawmakers. “But unprecedented is now the reality and the normal in which Reclamation must manage our system, for warmer, drier weather is what we are facing.”

Accelerating Lake Mead’s decline, the Bureau of Reclamation recently implemented a plan to hold back 480,000 acre-feet of water in Lake Powell that would normally be released downstream and to Lake Mead, a measure taken to ensure that Glen Canyon Dam can continue to generate electricity amid what the federal government said are the driest conditions in the American West in more than 1,200 years.

In late April and after years of construction, the Southern Nevada Water Authority turned on pumps for a $1.3 billion “third straw” and pumping station to ensure Southern Nevada could draw its share of water from the lake. Water authority spokesman Bronson Mack said engineers believe the pumping station would be able to pump water until the lake drops to 875 feet, where the pump sits. Southern Nevada depends on Lake Mead for 90 percent of its water.