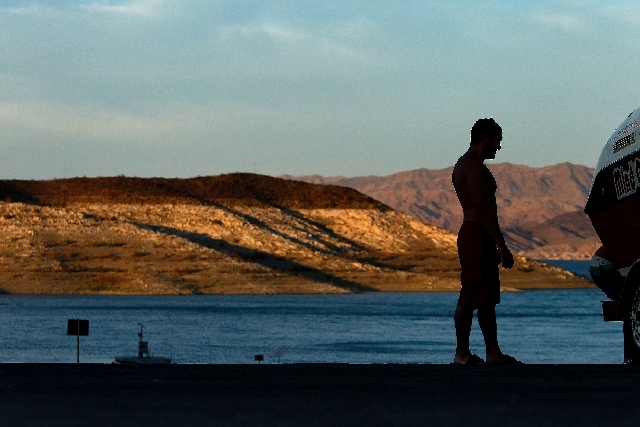 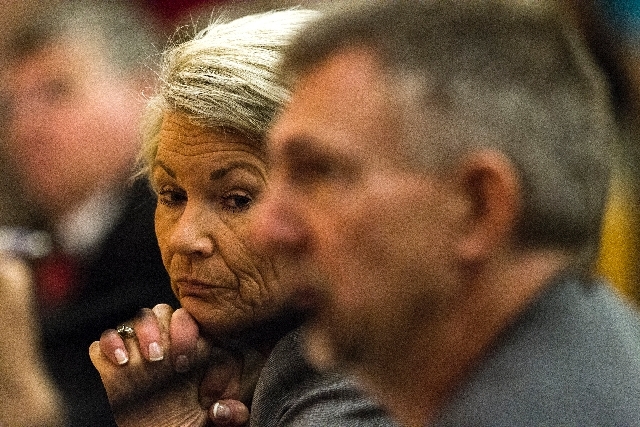 The Colorado River is locked in the grips of a slow-moving natural disaster, and Southern Nevada Water Authority General Manager Pat Mulroy thinks the time has come for some federal disaster aid.

“This is as much an extreme weather event as Sandy was on the East Coast,” she said, referring to the deadly and destructive hurricane that hit the United States in fall 2012. “Does a drought not rise to the same level as a storm? The potential damage is just as bad.”

Mulroy’s comments come as the Colorado wraps up another disappointing water year and approaches another grim milestone: By the end of August, the total amount of water stored on the river is expected to reach its lowest point since Glen Canyon Dam was finished and Lake Powell began to fill in 1966.

Federal regulators are expected to announce plans to slash the annual release of water from Powell, a move that will accelerate the decline of Lake Mead.

The reservoir east of Las Vegas is expected to shrink almost 25 feet over the next year to a record low, with Lake Powell not far behind. By fall 2014, the surface of Lake Mead could drop to 1,075 feet above sea level, triggering the first federal shortage declaration on the river and prompting water supply cuts for Nevada and Arizona.

At this point, Mulroy said, it will take “a major, Noah’s Ark-type event in the next week” to change the upcoming announcement by the U.S. Bureau of Reclamation, which oversees the coordinated operation of the two reservoirs. “I’m very worried. I’m expecting the worst,” she said.

Under normal conditions, Lake Powell releases at least 8.23 million acre-feet of water a year downstream to Lake Mead for use by Nevada, Arizona, California and Mexico. This year’s release is almost sure to be cut to 7.48 million acre-feet to slow the decline of the upstream reservoir.

“This is the first time ever that has happened,” Mulroy said.

One acre-foot of water is enough to supply two average valley homes for a year. Under a series of agreements stretching back 90 years, Nevada gets 300,000 acre-feet of river water each year, the smallest share by far among the seven states that draw from the Colorado.

The Las Vegas Valley depends on the river for 90 percent of its drinking water . That water is drawn from Lake Mead using two intake pipes that could stop working if the reservoir drops far enough.

The surface of Lake Mead already has fallen more than 100 feet since the current drought descended on the Colorado River in 2000.

But even in an average year, the river does not carry enough water to fill the allocations parceled out decades ago to the seven states and Mexico.

The expected cut to Lake Powell’s release for the coming year creates a 1.5 million acre-foot math problem for Mead, which is supposed to deliver 9 million acre-feet of water each year to Nevada, Arizona, California and Mexico.

The dire situation is forcing Mulroy and other water managers along the river to consider new strategies to protect lake levels and squeeze more water out of the stricken river.

One short-term option is to pay farms in Arizona and California to temporarily fallow fields and use water that would normally go for irrigation to prop up Lake Mead.

Already, California, Nevada and Mexico are banking as much unused water as they can in Lake Mead, adding about 10 vertical feet to the reservoir that wouldn’t otherwise be there.

Representatives from the seven Colorado River states will soon start serious talks on how to slow Lake Mead’s decline and what to do if it continues to drop. Mulroy said a series of short-, medium- and long-term ideas will need to be evaluated and agreed upon in the coming months and years. “I think we’re going to eat the dinosaur one bite at a time.”

Almost anything they do will require money, and that’s where the federal government can lend a hand, Mulroy said. After all, the Colorado supplies water to more than 30 million people across a region that produces about a quarter of the nation’s gross domestic product, she said. “This isn’t just a Las Vegas problem.”

A RACE AGAINST THE LAKE

But it is a huge problem for Las Vegas.

Water authority officials long have warned that one of the community’s two straws into Lake Mead will stop working if the water level drops to 1,050 feet above sea level. There is concern that intake No. 1 could shut down even sooner, perhaps at lake elevation 1,062, without a retrofit to its pumping station at the lake.

Mulroy said engineers are evaluating that possibility and trying to determine how much a retrofit might cost.

Meanwhile, the authority is rushing to complete a third intake capable of drawing water from one of the deepest parts of the lake.

Mulroy said she expects the $817 million project to be finished and on line by the end of 2014 — because it has to be. If conditions on the river worsen, Intake No. 1 could be out of commission by spring 2015.

“Look how narrow the window’s gotten,” she said.

Lake Mead’s decline also could speed up a decision on the authority’s controversial plan to tap groundwater across rural Clark, Lincoln and White Pine counties.

Once the lake hits 1,075 feet above sea level, perhaps as early as December 2014, it will automatically trigger a final vote by authority board members on whether to design and construct the network of wells and pipelines.

The water authority still hasn’t figured out how to pay for the project, which could total more than $15 billion including financing costs.

One thing is clear, Mulroy said: It will take the creativity, cooperation and shared sacrifice of all Colorado River water users to make it through this crisis. All the old divisions must be set aside.

“You can’t go to court. You don’t have time to go to court. You’ll be sucking air (through your intakes) before that gets done,” she said. “Now is not the time to rattle sabers. It’s a time to roll up your sleeves and work as collaboratively as you can.”

Praying for a change in the weather couldn’t hurt either, Mulroy said.

“It’s all a function of how long does the drought last. At some point, the system will recover,” she said. “We know the situation is challenging, but we don’t consider it hopeless.”